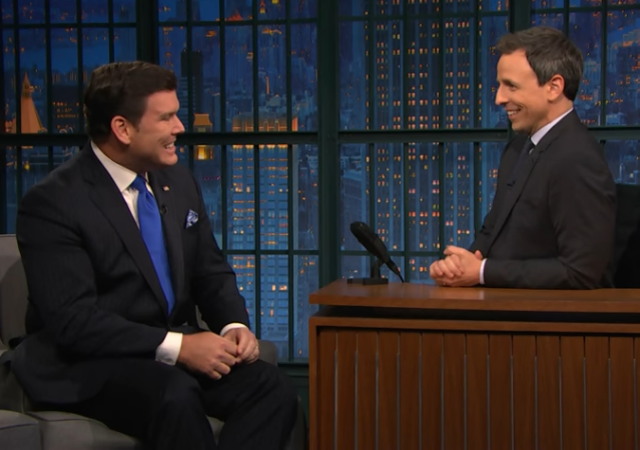 I’m a big fan of Special Report with Bret Baier on FOX News. Baier is one of the best straight news guys on the network, if not on all of television and he’s very good at keeping himself out of the story.

This week Baier was on Late Night with Seth Meyers and it was fascinating to see him on the other side of an interview. He spent most of the time talking about news coverage of the election and Trump, naturally.

Baier did a pretty good Trump impersonation when describing the times the then-candidate would confront him about the content of his show.

Meyers asked then if Trump’s tweets — which are often criticisms of cable news segments — are a distraction from his policies.

“First of all, it’s a challenge. Everything that he says now is news because he is now the President-elect. He’ll be President January 20. I think he does effectively take the media on a ride sometimes to say, ‘Look at the shiny thing over here,’ in 140 characters or less.”

He pointed out that he and the rest of the media need to “balance” and focus on policy just as much as the tweets.

One moment not included in the clip above is when Baier was asked by Meyers about his interview with the Dalai Lama last summer in which Baier asked the spiritual leader if he had ever seen the film Caddyshack.

If you’ve seen the film, you’ll recall the outstanding scene where Bill Murray’s groundskeeper character Carl Spackler recounts a time he caddied for the Dalai Lama.

Baier went there in his interview but the Dalai Lama hadn’t heard of the film. Watch:

I, for one, am so glad Baier asked the Dalai Lama about that.

He’s a nice boy who loves his mom.