Her name calling and anger schtick is growing old. 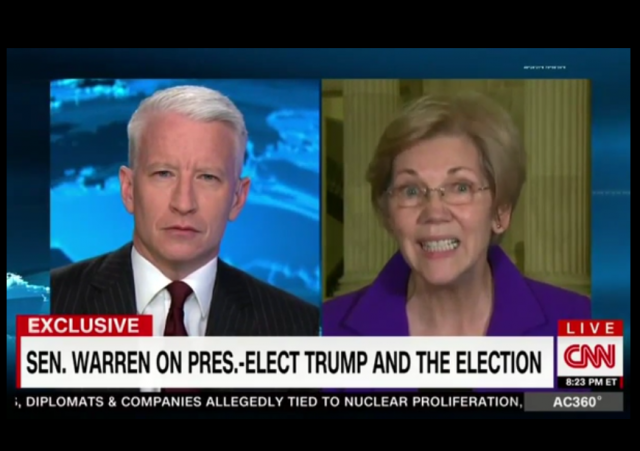 Elizabeth Warren is going deeper and deeper off the deep end since Trump won.

Anderson Cooper is getting in on the act, Cooper Corners Senator Warren: ‘Your Message Is Not Resonating’ (emphasis in original):

During an extended interview on CNN’s Anderson Cooper 360 Wednesday night, things got a little heated between Cooper and Senator Elizabeth Warren. The almost 25-minute-long interview grew tense when Cooper grilled Warren on how out of touch the Democratic Party is with Middle America. “When you look at that electoral map, I mean, there is blue on both coasts basically, and there is a lot of red in the entire rest of the country,” he noted before asking, “Do you feel like you are out of touch?”

Warren quickly went on the defensive and tried to hide behind the popular vote: “Out of touch when 2.3 million more people voted for the democratic candidate than the Republican candidate.” She went on to point to how the Democrats picked up seating in the House of Representatives and the Senate. But the facts is, that before the election every liberal commentator predicted that the Democrats would take back the Senate and possibly the House.

….But Cooper pressed on almost slighting her for the declaration, saying, “But it sounds like you are saying you won. But you didn’t. So what went wrong?” She again retreated to arguing about the popular vote margin growing for Clinton.

Cooper seemed to rub salt into the wound that was Hillary Clinton’s so-called Rust-Belt “firewall,” which was comprised of Pennsylvania, Ohio, Michigan, and Wisconsin (all of which Donald Trump won):

… The CNN host called out Warren for being condescending to those who voted for Trump:

Sounds like you are telling those workers who are out of jobs who voted for Donald Trump in Ohio and other spaces that they were just mistaken. That they were sold a bill of goods or they just don’t understand what’s in their best interest.

Is that one word, or two?

She is loopy and crazy. That eye-roll after Cooper challenged her is truly unhinged, and hysterical

Y’all better be careful lest she taunt you a second time.

Her mother was a hamster, and her father smelt of elderberries.

OK, that was FUNNY right there, I don’t care WHO you are…

I fart in her general direction.

I have to admit, professor, a couple years back I didn’t get your posts encouraging Warren to run for president.

she lied to get ahead. It got her ahead, but it showed a person who had no morals. The main steam media has covered for her, but the truth will destroy her.

She needs to stop yapping about the popular vote. Who cares if there are millions more stupid people in California than in the rest of the country?

Squaw drink too much firewater and make too much warpath.

And its not like they are willing to steal hiring quotas from native americans to get ahead.

Gosh golly Elizabeth, there are some things that even a Deplorable won’t do…

As for Teh Crazy, I honestly think there is something wrong with the East Coast (Maryland here). Didn’t the Roman Empire fall in part because of lead poisoning? Maybe its the radon or something, but most people up her are nuts, more than is standard for your typical liberal woman and her 23 cats.

All you have to do is look into this woman’s eye’s to see she has become completely unhinged.

No, Liz. Hillary did not win the popular vote, either. The popular vote is taken in EACH State, and the candidates either wins or loses the State. Trump won more of the right States than Hillary did.

To be more precise, Hillary did not win the popular vote because it wasn’t even in play. If the popular vote determined the winner, both campaigns would have had entirely different strategies, likely spending more of their time energy and resources in high population centers.

For example, Trump wouldn’t have written off California. Alot of Hillary supporters in Maryland would have gotten and voted for her even though she already had the state’s EC votes in the bag. Same for red states like Texas where people stayed home because they already knew Trump would win the state. In short, everything would have been different and the popular vote totals would not be what they are citing today.

I find it amusing the see so many Democrats and MSM hacks are pushing this “but she won the popular vote” nonsense. It’s like saying the Packers really won because they gained the most yards, even though the score had them losing 20-17. These are the same people who never miss an opportunity to insist they are so much smarter and sophisticated than us rubes in “flyover country”. But their support of this popular vote narrative shows they lack the most basic critical thinking skills. Which I think calls into question their reasoning on a host of other issues.

The Senate comment is even more ludicrous. Only a third of the Senate was even up for election and most of those were in democratic states, so ,well DUH they’re going to have more votes in those states.

I had the “privilege” of meeting Lizzie when local women’s groups were exploring whether to support her senate run. She was unhinged then. Most of the women pushing her had no idea, nor did they seem to care, what her politics were. She had just been snubbed by Obama. The ladies were still angry about 2008. Sending her to the senate was more about getting under Obama’s skin than anything Lizzie brought to the table. Little good comes from being vindictive.

Unhinged is the perfect word for her. I will also say that being from MA I get to hear even more from her than the rest of the country and after trying to listen for a few years she is just not very bright.

The irony is that her approach to politics has far more in common with Donald Trump than Bill Clinton, Obama or JFK.

She may have read the Clinton campaign propaganda, and talked to her fellow travelers to the point that she believes the basket of slurs. If so, her loss of perspective shows a certain temperamental fragility, perhaps unsuitability for high public office.

The horse is dead, Liz. It’s way past time to dismount.

,,,,and yet Massachusetts keeps re-electing her (like Kennedy before her)…..(like Pelosi in CA)…..

Maybe, along with this “fake news” Big Lie, the MSM is telling her – subtly, “We want to back you – but you have to change up on the shrill, Hillary-like ways….”