Oprah Winfrey Takes Heat for Being Optimistic About Trump Presidency

Oprah Winfrey Takes Heat for Being Optimistic About Trump Presidency 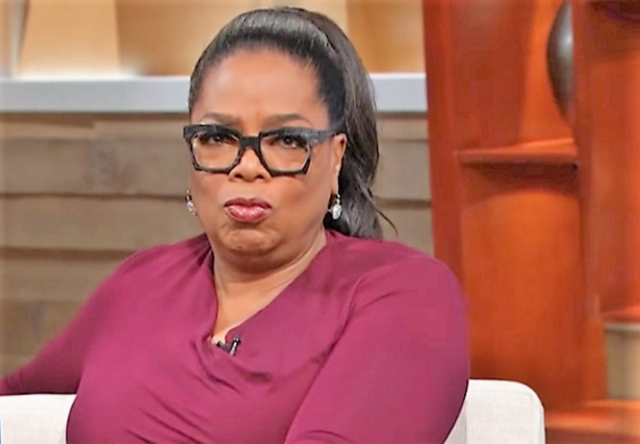 Oprah Winfrey turns out to fall into the first camp, placing herself among the optimists:

The TV host tweeted on Thursday a picture of Donald Trump at the White House with President Barack Obama with the caption ‘Everybody take a deep breath! Hope lives.’

She also told Entertainment Tonight that seeing President Obama and President-elect Trump together had ‘given her hope’.

Predictably, some of Oprah’s fellow celebrities do not approve, and refuse to share her sentiments. Some responses that are rather typical:

‘Minority children are already being targeted,’ she tweeted.

So we are seeing one of the leftist approaches start to shape up, and it will be (as one might have expected) to attribute every bigoted act that occurs in America during the Trump years (and some that are hoaxes; see this) to Trump:

Other anti-Semitic imagery—such as “Sieg Heil 2016” spray-painted on an abandoned store front in Philadelphia—may have been legit expressions of bigotry or may have been similar attempts at commentary on Trump’s election; it’s unclear because no one is taking credit for them. The bulk of racist graffiti incidents appear to have happened around middle- and high-schools, which doesn’t make their messages any less hurtful, I’m sure, but does suggest a phenomenon driven by mean and immature kids rather than rogue bands of serious neo-Nazis.

And while all sorts of horrible incidents are being reported on Twitter and Facebook… well, anyone can say anything on Twitter and Facebook. The bulk of these stories are “friend of a friend” told me types. But if men were really going around pulling knives on Muslim women on public buses in Trump’s name, there would at least be local or campus news reports of it. Same, too, for the alleged wave of transgender teen suicides which keep getting mentioned in media but for which no one can offer any evidence. (Update: more on the alleged suicides here.)

Has the number of such acts actually increased? It’s certainly possible, although we don’t know. As of now, however, the evidence appears rather weak. After all, even prior to Trump there have always been some incidents of this type, so comparisons aren’t easy in terms of numbers and causation. It’s certainly possible, of course, that bigots in this country might be feeling their oats after Trump’s win. But what is virtually certain is that the left will try to make political hay out of any incident it can, and if the incidents don’t exist they probably will be invented.

This would be the same left that seems unable (actually, unwilling) to connect the dots on—to take just one example—the increase in crime in many urban black neighborhoods known as “the Ferguson effect,” and to connect it to the left’s own behavior:

When officers disengage, the result is not a boon for black lives, as the Black Lives Matter movement would predict. Rather, criminals become emboldened, leading to this year’s bloodbath, whose victims have been almost exclusively black and, far too often, children and innocent bystanders.

Oprah is not the only former Hillary-supporter trying to inject a post-Trump note of patience and guarded optimism. In fact—at least in her official utterances—Hillary Clinton herself has counseled something similar. But there are many others who either are unable at this point to join in Oprah’s sentiments, or (particularly among the more activist and leftist) who have an investment in continuing to fan the flames of discord.

We all have hope. The hopeless ones are in the streets acting the fool.

Oh please do disturb these little snotflakes while they are in the middle of their depression by telling them that there might be a bright side to this. This is the way they have learned to cope with adversity and they have decided to weather the storm mired in their misery.

I always thought Oprah was revered as something of a leftist deity. Are they no longer willing to overlook her intelligence, work ethic, and immense wealth? Are they seeing hints of something other than a victimized black female?

My local newspaper, the San Diego Union-Tribune is running some hysterical articles. Below is a collection that took up two pages of the paper They have also introduced a curious form of attribution.

“Obama Tries to Calm US, world”
by Juliet Eilperin & Greg Jaffe, who “write for” the Washington Post

“Protests continue in aftermath of Trump’s Victory”
by John Rogers, who “writes for” the Associated Press

This “writes for” is a new designation to me, and I see a distinction between that phrase, and the usual attribution to a news source.

Other articles in the same section have clear attribution to the news agencies.

So, what does this mean? It suggests that the articles are not the work product of the named news agencies.

Seems like ‘Spec’ articles, where the paper puts out a request for articles on a particular subject and various writers ‘bid’ on them, in a way. An honest request by the papers for this type of writing would be: “NYT seeks articles on upcoming Trump presidency. Must be frantic, disturbed, and imply his policies will cause terrible disruptions among the American people (particularly women and minorities) as well as our traditional foreign allies such as Iran and China. Bonuses for including each of the following adjectives….”

Yea, I heard one of the talking heads, maybe CNN on the radio today. I heard something like what you said:

I laughed because they are trying to attack Breitbart, but they might find themselves banning their beloved CNN, MSMBC, other three letter news networks…etc. It is a huge joke. Hope Trump makes the right moves.

Oprah is returning the favor. Remember when L’Orange suggested he would choose Oprah for his veep.

What people have to realize is that many of the people who are wringing their hands and crying that the sky is falling, because Donald Trump won the election, are simply deranged. Other than a change in the Presidency, which had to occur this year anyway, nothing else has really changed. The Congress is still made up of the same people, none of whom supported Trump. The make-up of the SCOTUS will remain the same as it was prior to Anton Scalia’s death, for the near future. So, what has changed? Only the fact that Donald Trump has pledged to enforce the laws of this nation, as written. Unlike his predecessor, who not only refused to enforce the laws which he swore to uphold but actually usurped the power of the Congress and enacted his own laws by Presidential fiat. The Donald has stated that he will enforce the existing laws. The only law which he has said that he would change is the ACA. And, except for those actively engaged in violating the law, who can argue against enforcing it?

I keep hearing libs claim they are ‘fighting for their lives’ with the advent of the Trump presidency. Is the GOP or Trump sending out kill teams or something? If so, I want a piece of that action.

It’s like Solzhenitsyn’s “Don’t ever be the first to stop clapping”, only in reverse.

It’s why they are Leftists to begin with – not because they have any political principle they care about, but because adopting some fashionable “cause” so they can feel their lives matter, because Mommy also promised them they were Special and would make a difference in the world.

I saw it all the time on Facebook. Took me awhile to figure it out – they would post some silly liberal meme, I would try to debate them and explain why their meme was false, and they would come down on me with hatred and contempt. See, they didn’t want to discuss any issue, they were simply flashing tribal tats: “Look I’m down with the Cause, I’m one of you guys, can I sit at your table during lunch hour?”. So they got pissed and threw tantrums, not because I was right, didn’t matter, but because I was spiking their personal PR.

Probably the most accurate description of the leftist mob I have ever seen.

She’s right. Give him a chance.
But… Shouldn’t she be packing for Canada right now? 🙂

I’m just going to say, the literal misuse of the word “literally” makes me figuratively insane.

It’s certainly possible, of course, that bigots in this country might be feeling their oats after Trump’s win.

I’m sure that is happening, to some extent; it would be extraordinary if it didn’t. It certainly happened eight years ago after 0bama won.

The morning after the 2008 election a friend of mine was at Dunkin Donuts behind a group of young people of choler (as buzzsawmonkey puts it), who loudly demanded free donuts “because 0bama”.

I’m just going to say, the literal misuse of the word “literally” makes me figuratively insane.

While I agree with the point you’re making, this is not an example of it. Ms Matarazzo meant “literally” absolutely literally. She is so deluded that she actually believes that if Trump is not stopped she and her compatriots are likely to lose their lives.