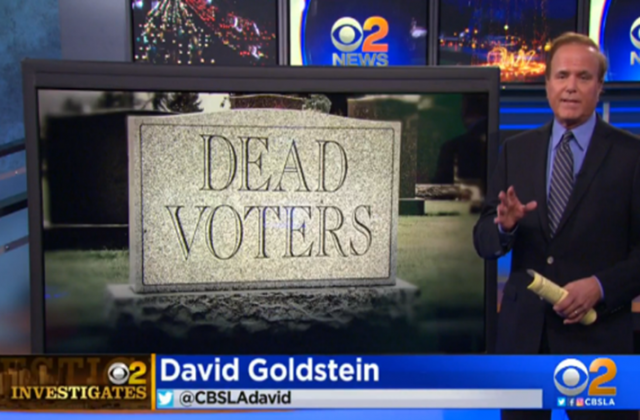 Aleister blogged about James O’Keefe’s video exposing a Chicago activist, who visited the White House 45 times since President Obama took office, and his description of how voters are bused into key precincts to influence results.

Now, in my home state of California, it is being revealed that over 80 ballots to different individuals were deposited at one address in San Pedro.

Jerry Mosna was gardening outside his San Pedro, Calif., home Saturday when he noticed something odd: Two stacks of 2016 ballots on his mailbox.

The 83 ballots, each unused, were addressed to different people, all supposedly living in his elderly neighbor’s two-bedroom apartment.

“I think this is spooky,” Mosna said. “All the different names, none we recognize, all at one address.”

His wife, Madalena Mosna, noted their 89-year-old neighbor lives by herself, and, “Eighty people can’t fit in that apartment.”

They took the ballots to the Los Angeles Police Department, but were directed to the post office. They felt little comfort there would be an investigation, and called another neighbor, John Cracchiolo – who contacted the Los Angeles County Registrar’s office.

Given the suspicious set of circumstances, both Mosna and Cracchiolo expressed concern about voter fraud.

Of course, our state officials are quick to deny that voter fraud is a serious issue in California.

“There’s nothing rigged about our elections, and even when there are some minor irregularities, the reality is that they will be statistically insignificant,” San Francisco District Attorney George Gascon said Tuesday at a news conference meant to reassure voters.

Additionally, earlier this year, an investigative team uncovered the fact that hundreds of dead Californians have been voting regularly from beyond the grave.

…CBS2 compared millions of voting records from the California Secretary of State’s office with death records from the Social Security Administration and found hundreds of so-called dead voters.

Specifically, 265 in Southern California and a vast majority of them, 215, in Los Angeles County alone.

The numbers come from state records that show votes were cast in that person’s name after they died. In some cases, Goldstein discovered that they voted year after year.

While California is not going to morph into a “Battleground State” between now and Nov. 8th, there are many local elections in which a few hundred votes can make a significant difference. The reasons for the continued “death votes” need to be determined, and appropriate punishments meted out to those who have undermined our free-and-fair election process.

In perhaps one of the greatest example of projection in history, California Democrats have opened up a “Voter Intimidation Hotline“:

“Voting is the most basic right in our democracy, but we have already seen Republicans here in California and across the nation using voter suppression tactics to stop people from voting,” California Democratic Party Executive Director Chris Masami Myers said in a statement.

Meanwhile, the San Diego Union-Tribune had nothing better to do today than re-publish an old piece from Mitt Romney during the primary season. It took up a quarter of the editorial page.

My question is, what did this story replace? The U-T is under new, Clinton-supporting ownership, and I have to wonder what struggle prompted the publication of this untimely placeholder.

I guess they could have covered the Trump Hotel bankruptcy in Toronto. Yes, I know Trump didn’t lose any money in the deal. He just sold his name. I guess he can govern the same way – use his name, but avoid the blame.

I guess they could have covered the arson of a predominantly black church in NC; as this website could have. This website did get the vapors over arson at a Trump campaign storefront.

As for a single incident in which 80 ballots were sent to the wrong address. I guess that will cost Trump California. Losing California will surely cost Trump the Presidency. BTW, did they find the matching phony voter ids? I’ll bet O’Keefe is manufacturing them at this very moment for his next phony video.

Except that CA doesn’t ask for IDs…. that would be RAAAAACIST.’

And you know it.

Mail in ballots are the easiest to cheat with. Once they are removed from the envelope – there is not trail. If you vote five times, once the ballots are separated they are golden. They cannot be identified so they are always counted.

Even if someone is identified as having perpetrated fraud – his vote still counts because there is no way to back it out.

Mail-in ballots are auditable. Touch screens are not.

No, actually, they aren’t. The only address info is on the envelope. Don’t bother with the envelope; just fill them out and count on the Democrats doing the counting to slip them in the stack.

So why does the right put all the emphasis on in-person voter fraud when there is virtually none. Yes I said virtually. I am sure that it happens on extremely rare occasions.

But voter suppress is occurring wholesale in Wisconsin and North Carolina. It would have occurred elsewhere if the courts had not stepped in. I guess that is reason enough to not allow Hillary any court appointments for the next 4 years.

It happens in the dozens of Democrat run precincts that reported more voters than population. Obstruction of investigations isn’t innocence.

Maybe America is waking up to this democrat-party-driven decades-long scourge on our once beloved country.
No voter ID. Voter ID is racist. There is no voter fraud. It is racist to clean up voter roles. Poll watching is racist.
It is not statistically significant.
Oh yeah? It gave us obamacare.
Perhaps an unexpected benefit of a Trump election would be sparking a real effort to end this crap.

“Maybe America is waking up to this democrat-party-driven decades-long scourge on our once beloved country.” Maybe some people are blowing smoke.

“Voter ID is racist” Yes, if it used to suppress voters based on race. That is the very definition of racism.

“There is no voter fraud” Yes there is an infinitesimal amount of voter fraud. Boo hoo.

“Perhaps an unexpected benefit of a Trump election would be sparking a real effort to end this crap” 1st it wouldn’t be unexpected. His whole M.O. is to suppress anything he doesn’t like including anyone who would vote against him.

2nd, you definitely shouldn’t count your chickens before they hatch. In fact, you don’t even have enough eggs.

SoCA Conservative Mom in reply to OnlyRightDissentAllowed. | November 4, 2016 at 1:33 pm

Interesting when you ask someone who is actually a minority, they don’t think asking for IDs is racist. https://pjmedia.com/video/what-berkeley-liberals-think-of-voter-id-laws-vs-what-actual-harlem-black-people-think/

Hey, jerk. What chicken am I counting? You seem to have a reading comprehension problem.

I’d say the real racists are the ones claiming that ethnic minorities are not capable of getting the basic ID needed to function in modern society.

In a statement, the office of the Registrar said, “We are carefully reviewing our records and gathering information to fully identify what took place. Our preliminary assessment is that this appears to be an isolated situation related to a system error that occurred causing duplicate ballots to be issued to an address entered for a single voter. We are working directly with the system vendor to ensure the issue is addressed and to identify any similar occurrences.”

Yeah, right. We believe you. Not.

I don’t know how it’s done elsewhere, but in NC the local Board of Elections receives a list on the first of every month of the people who have passed away that month. The get one list from the local records office which is compiled from death certificates. They also receive a list from the State Dept. of Health and Human Services. Those people are removed from the rolls. Our regular ballots have a bar code on them which identifies the voter, but I’m not sure the absentee ballots have the same thing. I’ll have to check. This isn’t rocket science.

There is also the Social Security Death Master List. Nobody objects to the cleaning of the rolls. But recent examples in Fl and NY have led to the disenfranchisement of large numbers of citizens. Such procedures need to be undertaken with great care, safe guards and audits.

Despite the hew and cry on the right, it appears that most of those affected by attempts to ‘clean up the rolls’ are poor or elderly or of color. Some of us think that is no accident; just as this article which strings together a questionable video with an ongoing investigation and a computer error to make a case for what? Voter Ids?

Except that democrat judges are blocking any purges there.

If they need to cheat in California then Trump must be doing a lot better then anyone thinks.

If they were cheating, why would they mail them? Wouldn’t the conspirator be waiting to collect them – assuming they were mailed for the purposes of fraud?

Einstein: Why would any criminal ever do something that gets him caught.

What are the thoughts on thumbprint voter identification? More expensive but an easy way to use something everyone has for validation.

…until some bogus study comes out that minorities tend to burn off their fingerprints more than whites.

Since you brought it up: Exactly what have Indiana officials uncovered so far? So far no information has been released that who indicate whether the alleged fraud was perpetrated by Trump or Clinton supporters. I could easily hypothesize that it was dirty tricks by Trump supporters. But why bother? Let’s see what the Indiana authorities have to say rather than blindly, and in a partisan manner, get hysterical over a few strange events that do not appear remotely related.

healthguyfsu in reply to OnlyRightDissentAllowed. | November 4, 2016 at 12:53 pm

I see you typing a bunch of rah rah words but no one listens to your babbling rambles. What kind of person does this on a regular basis? Are you really that lonely?

OnlyRightDissentAllowed in reply to healthguyfsu. | November 4, 2016 at 1:04 pm

I know you only listen to what you already agree with. Are you that stupid?

Now we have lone-wolf voter fraud.

It was a Democrat run operation.

The original reporting pointed that out.

The issue in Indiana is

that runs the Indiana Voter Registration Program, which calls itself the largest voter registration program of African-Americans in the state. It says it submitted some 40,000 registration forms this year — until Republican officials stepped in.

O’Keefe is the boy who cried wolf. Does the MSM still cover him. No – and they shouldn’t.

As we get closer to election day does your pay change to by the post instead of daily participation? If so then I’ll be glad to help you get that amount to where even the DNC will question it. LOL

Only a bridge dwelling troll such as right dissent would ridicule the effectiveness of Project Veritas and James O’Keefe. Some Dem who has visited Obama in the White House over 300 times gets sacked because of the latest O’Keefe video.

The easiest way to commit vote fraud is through “counting”.