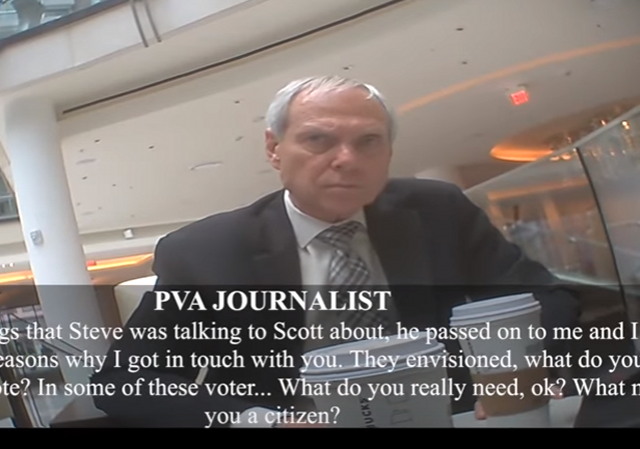 In the wake of James O’Keefe’s latest bombshell videos, Democrat operative Bob Creamer left his position at Democracy Partners. Then it was revealed that Creamer had visited the White House hundreds of times.

Now Ted Cruz is calling for an investigation.

Town Hall has more on the White House visits:

James O’Keefe of Project Veritas said that Bob Creamer of Democracy Partners had deep ties to the Clinton campaign and the Obama White House. On Weasel Zippers, they found that the top Democratic operative visited the Obama White House 342 times between November 21, 2011 and June 24, 2016. The site added that 47 of these visits were directly with President Obama.

As O’Keefe noted, Creamer is married to current Congresswoman Jan Schakowsky of Illinois, and that he was convicted of tax violations and bank fraud for which he served a five-month jail sentence, with 11 months house arrest. It’s something that WZ asked at the end of his post:

So this begs the question what was this ‘black hat’ guy, convicted felon, doing on such great terms with the White House? He was invited to all sorts of social functions, some because he was the husband of Democratic Rep. Jan Schakowsky, but he also private meetings with the President.

Just exactly what was he discussing at the White House and with Obama all those times?

This is the O’Keefe video, in case you haven’t seen it:

I’m sure this will be handled in the same way as Hillary’s emails, as the Fast & Furious operation, as the IRS Tea Party targeting, as the Black Panther voter intimidation…should I keep going?

Let me know when there’s there there.

Lots of there there.

“We have your emails podesta”
LOL, podesta deflecting on his emails and lying about hilldawg is going to be tough on Wall Street on cnn with people in the background yelling the above quote.
I also don’t see any hilldawg signs in the background.

Isn’t this what has caused us to realized that our Secret Service has become compromised beyond redemption?

In 2007, my 14 year old son had to complete an extensive federal background check a couple of months in advance just to go on a pretty low level visit to the White House where he wouldn’t meet anyone of actual importance.

Since Obama has moved in, we routinely see convicted felons, known drug abusers, illegal aliens and if I recall correctly, at least one person on the terror watch list of our allies.

But the GOPe s-bags, silent as usual.

Yeah, folks have been too hard on Cruz. He’s definitely a fighter and good to have on our side. Don’t agree with him 100%, but don’t agree with anyone 100%.

This would be a good cause for Ted to regain street cred with.

To paraphrase a great man, I’m certain the mainstream media will cover this story…

…with a pillow until it stops breathing.

But nobody but you is pure.

Well, I fin’ly started thinkin’ straight
When I run outa things to investigate
Couldn’t imagine doin’ anything else
So now I’m sittin’ home investigatin’ myself!
Hope I don’t find out anything . . . hmm, great God!

Senor, senor, do you know where we’re headin’?
Lincoln County Road or Armageddon?
Seems like I been down this way before.
Is there any truth in that, senor?

Kudos to James O’Keefe’s latest.
he seems to have finally found a truly “high value” target.

The Boy Who Cried Wolf

Creamer, whose wife is Illinois Democratic congresswoman Jan Schakowsky, has visited the Obama White House 342 times, according to official records. He met with the president at least once in the Oval Office, despite his criminal conviction for bank fraud.