“This is my freedom of speech.” 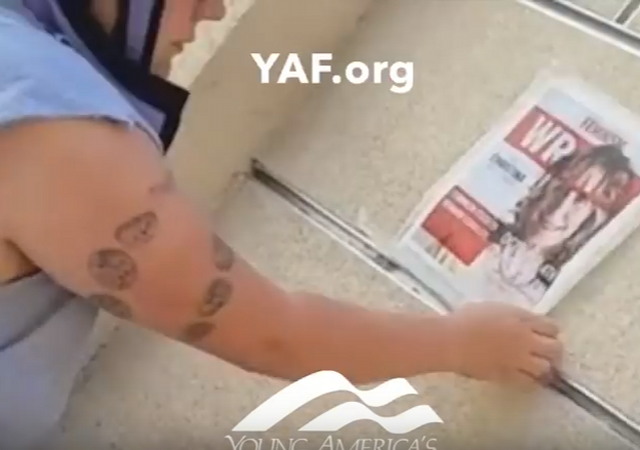 The Young America’s Foundation chapter at the University of California Los Angeles is hosting a lecture by conservative feminist Christina Hoff Sommers but campus feminists find that offensive and took it upon themselves to tear down campus flyers.

The fliers, which can be seen below, include details about the time and place of the lecture as well as the title, “Where Feminism Went Wrong.”

After being confronted by a CSULA YAF student, the vandal repeatedly insisted the fliers were “offensive.”

One of the feminists claimed removing the fliers was her First Amendment right.

“This is my freedom of speech,” she said.

He didn’t get an answer.

Here’s the flyer the feminists found so “offensive.”

Christina Hoff Sommers is no stranger to hostility from special snowflakes and we’ve covered it before:

A gulag system lies down this road.

Don’t think of them as Gulags. They are re-education camps.

They worked so well in Cambodia and Vietnam I’m surprised the feminazis don’t have some in operation already.

“I would say to any student who supports speech codes and does it in the guise of supporting, you know, liberal or progressive values, that they’re totally misguided. If the world – if the country – turned into their vision of the good country, the perfect country, they would end up eventually in the gulag. As soon as you agree that censorship is ok as long as it is only for the thought that YOU hate, eventually that animal is gonna turn on you. And you’re gonna end up the victim. Cuz the ideology can turn on a dime. Today the campuses don’t like the people on the right side of the political spectrum. I started school when it was the left side of the spectrum that was not liked. I’ve lived through these changes.” – Harvey Silverglate, co-founder of FIRE.

“a pair of disgruntled feminists”

Begs the question, is there such thing as a happy feminist?

Or the rarer happy and HAWT feminist???? 🙂

He didn’t get an answer.

Of course not. Logic and common sense will confuse them every time. They can’t grasp the concept that freedom of speech doesn’t apply just to them.

This is what they’re breeding at colleges and universities, today — brownshirt jackboot fascist larvae. All the more nauseating because they assume the sanctimonious posture of alleged moral superiority of the so-called “social justice” Gestapo. As delusional in their posture of alleged righteousness as the Muslim terrorist who believes that God has called him to slay or conquer the infidel. People who think that they have a right to engage in thuggish intimidation, disruption, invective, violence and silencing of people holding viewpoints at variance with their chosen orthodoxies.

We are in serious trouble, folks. These imbeciles will eventually find their way into positions of power in federal and local governments, in the judiciary, in the media, in corporations, and in academia. The damage that they can inflict is incalculable.

Good Lord man, they are already there. Just look at the past eight years of O’nothings administration.

Fair point; I don’t disagree. I guess I should amend my comment to state that the current crop of budding SJW’s currently enrolled in college is even more frightening than those already currently ensconced in political power and in academia.

I bet this feminist also supports islam and actively fights against Israel and the existence of Jews on campus.

Think how different things would be at universities if Marx had written a book on math instead of politics.

Generally when you look at such posters on campus, you don’t see one. You see a whole bunch put up in the same space.

Now you know why.

When your principles and values will not stand up to honest debate, you can’t allow it. Call names ban speakers and thus, no opposition is permitted.

What you describe is the face of totalitarianism — an ethos predicated on using threats, intimidation and violence to silence dissenters, to brook no opposition and to promote the Party orthodoxy by any means necessary.

They will continue unless they are stopped.
Recording them on video is not enough. They cannot be publicly shamed because they are not, and will never be ashamed of their actions.
Organizations like F.I.R.E. need to be more vocal and they need to educate conservatives on campuses so that they know what to do. The cry-bullies have no legal right to shut down other people’s right of speech.
If it had been me, I wouldn’t have allowed her to take the flyers down, but that probably would have ended in trouble. Conservative students on campus need to be taught how to stop this abuse.

The initial way to stop it is for the Students to file a Complaint with the STUDENT CONDUCT OFFICE and make enough fuss to get a meeting with Carol Roberts-Corb, Assistant Dean for Student Conduct. See link below.

The conduct of these “Feminists” is a direct violation of the Statement of Student Rights and Responsibilities, #5 Student Affairs, Section (b), Subsections 5 and 6.

Further, the Conduct of these “Feminists” is a direct violation of the Code of Student Conduct, stated in the CALIFORNIA CODE OF REGULATIONS, Title 5, § 41301, Standards for Student Conduct, Subsections (b)(3), (b)(4), possibly the “disorderly” component of (b)(6), possibly the “intimidation” or “harassment” portions of (b)(7), the “theft” portion of (b)(11), the “unauthorized destruction of other property in the University Community” portion of (b)(12) and the “violation of published university policy” portion under (b)(16).

The students need to complete the “Student Misconduct Incident Report Form” and make these little Progressive Nuts live by the system that they’ve put in place in that it’s not the nature of the ACT, but whether the OBSERVER was “offended.”

You expect the rules to be enforced equally? I was that naive 20 years ago.

I expect that the rules will NOT be enforced equally, and it will be the perfect set up for a FIRE Constitutional Civil Rights suit against the school and against the administrators personally for failing to enforce the rules equally.

It’s Alinsky Rule 4 writ large. Make they live by their own playbook, and WHEN they fail follow up with Rules 5 (Ridicule), Rule 8 (Keeping the pressure on), Rule 12 (personalizing, freezing and polarizing the target) and finally Rule 10 (Constructive Solution) that says that there must be a sub-division of the Student Misconduct Committee that guarantees that there is no political bias in investigation and punishment of incidents, that ALL complaints must be investigated and such investigations and punishments must be independently annually audited for bias.

“Conservative students on campus need to be taught how to stop this abuse.”

We have that here in TX. It’s called campus carry.

No, no it’s not. And I’m sure I’m going to get thumbs down for this but a concealed carry license is not a license to stop people from ripping down political posters. This is something that puts you in reasonable fear for your life? Or the lives of others?

This is not something, life and death, that should ever be joked about.

Female chauvinism serves the interests of neither women nor men, and certainly not Posterity. It is a narcissistic ideology that is comparable and, in some ways, excels over its male counterpart.

These leftists are bullies. Like all bullies, they understand only one thing and that is force. They use it on others until force is used to stop them. Talk, reasoning, logic, etc. is viewed as a sign of weakness. Ask any street cop.

I think the left knows that they will rule if they can prevent any force being used against them. This is one reason why they attack the police using anything as an excuse. Charlotte makes sense if you consider it is pure intimidation with the goal of creating totally neutered police officers. They fear the local police. See Alinsky. YAF needs some “muscle” in their organization. Melissa Click knew muscle works.

Partially. And partially they have to use the procedures that have been set up in an intelligent way, as an avenging sword.

See my list above of all the ways these little progressive snowflakes have violated both university policy and State Regulations.

Curious thing about “freedom”: it cannot infringe upon other’s freedoms. Her tearing down a flyer in the name of her own “freedom of speech”, a flyer ostensibly authorized by school officials, is no longer “freedom of speech” but vandalism because her action infringes upon those who (1) received authorization for and placed the flyer on the bulletin board and (2) those who would view the flyer. Freedom is a door that swings both ways; she has been hit in the face by said door because she does not understand it … of course, given her presumed education, she has not been taught complete truths, only half truths.

Again, we need a safe space from censorious tyrants.

“… a pair of disgruntled feminists on camera tearing down flyers ….”

You have spelled “vandals” incorrectly.