Expert on China: “It sure looks like a straight-up snub.” 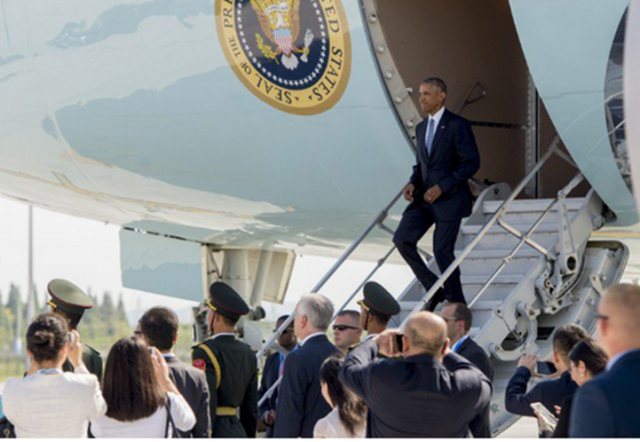 With less than 140 days left in the Oval Office, President Obama is attempting to ensure his legacy of foreign policy ineptitude continues on after his term ends.

It appears as if he has succeeded with the Chinese, as observers indicate he was denied the usual pomp and pageantry reserved for greeting other heads-of-state.

China’s leaders have been accused of delivering a calculated diplomatic snub to Barack Obama after the US president was not provided with a staircase to leave his plane during his chaotic arrival in Hangzhou before the start of the G20.

But the leader of the world’s largest economy, who is on his final tour of Asia, was forced to disembark from Air Force One through a little-used exit in the plane’s belly after no rolling staircase was provided when he landed in the eastern Chinese city on Saturday afternoon….

Experts on China were brutal in their assessment of what message the Chinese intended to send with this landing “ceremony.”

“It sure looks like a straight-up snub,” Bishop said. “This clearly plays very much into the [idea]: ‘Look, we can make the American president go out of the ass of the plane.’”

Meanwhile, the administration is trying to downplay a series of kerfluffles between Chinese officials and American ones after the plane landed.

…The summit got off to a contentious start Saturday with Chinese officials reportedly confronting National Security Advisor Susan Rise and other U.S. officials in at least three separate incidents. Reporters on the tarmac said that as soon as Air Force One arrived, a member of the Chinese delegation started screaming at the White House staff.

One reporter described the scene as “a bit of chaos,” as the Chinese official appeared furious about journalists being so near Obama’s arrival, though they purportedly were standing in the area Chinese officials had designated for them.

White House officials reportedly told the Chinese official that the U.S. press corps was staying for the American president arriving on a U.S. aircraft.

When the White House official insisted the U.S. would set the rules for its own leader, her Chinese counterpart shot back, the Associated Press reported.

“This is our country! This is our airport!” the Chinese official yelled.

The exchange with Rice reportedly happened when the Chinese official attempted to prevent her from walking to the U.S. motorcade, as she crossed a media rope line. The official purportedly spoke angrily to her before a Secret Service agent intervened…

Team Obama is certainly putting a new spin on the phrase “charm offensive.” The President is continuing this approach during the G20 summit, by lecturing Turkey’s President Recep Tayyip Erdogan that it’s critical to “finish the job” of securing Turkey’s border with Syria.

Obama said securing the Turkish border was important because that is where would-be recruits to the Islamic State (IS) extremist group enter Syria.

Obama also said Turkey must not carry alone the burden of addressing the Syrian refugee crisis.

But at least Obama managed team up with China’s President Xi to put his pen to the Paris Climate Accord, which I predicted last week.

President Obama and President Xi Jinping of China formally committed the world’s two largest economies to the Paris climate agreement here on Saturday, cementing their partnership on climate change and offering a rare display of harmony in a relationship that has become increasingly discordant.

“Increasingly discordant” aptly describes the state of all our foreign relations after two terms of Obama.

The airport greeting is the perfect symbol of the loss of status the office of the U.S. President has experienced under Obama, as well as the damaged state of our relationships with China and other nations.

I wondered, early on, when Obama was doing his all eager to bow to other leaders, talk up other countries while talking America down, and generally being a horse’s backside what matters would be like toward the end of his presidency. Although I had a suspicion, that’s all it was.

Now, we all know. All those flowery words and promises were just that. They’re mostly all dried and wilted. Too bad that America will pay the price for some years to come.

of course it was a snub…

but one is not allowed to admit the god king has feet of clay.

dinglebarry was greeted with all of the respect that he has earned – NONE !

Considering how much of our debt they own, I think the Chinese reception of Obama was pretty well on the money.

Remember eight years ago, amid all the “hope and change” mania, when the media (and their accomplices in Hollywood) assured everyone that The Lightworker was going to usher in a new era of competence and accountability in government, and make America loved by the world again?

Now, after eight years of the most lawless, corrupt, and incompetent administration in history, we’re watching Obama get mocked and snubbed and played for a fool by every other country on the planet, as he does his best to get the sleaziest grifter around elected to succeed him.

Thanks for nothing, Obama voters.

He came crawling out of the cargo hold like the little bitch ass punk that he is. I’m surprised he wasn’t wearing an orange vest and lugging some bags. How embarrassing. How pathetic. How perfectly appropriate.

To be fair, I wouldn’t let obama into my house through the front door either. I’d remind him of the No Solicitor sign by the driveway.

If Obama had any balls at all, he would have told the pilot to head to Tokyo, after dumping the contents of the onboard bathrooms onto the tarmac. I would have thought the Narcissist in Chief would at least be pissed off at the snub to himself, even if he didn’t care about the snub to the United States of America.

Well, Obama has worked hard the last eight years to lessen the status and presence of the United States worldwide, and as we can see this effort has borne fruit. He’s constantly boasting of his foolish “accomplishments” and lying to us about them (e.g., Iran nuke deal), which lies are noticed by world leaders.

In a former life, I spent a lot of time dealing with the Chinese. As a group they don’t have a lot of respect for any non-Chinese especially non-Chinese who are Black. They have this 5,000 years of civilization vs loin cloth thing about Africa and Africans.

It does not help that Obama is viewed as an idiot but he is further handicapped when dealing with the Chinese because of his race.

The Chinese treated him like he treated the Dalai Lama

Of course, the Chinese did not want him to meet the Dalai Lama, at all.
https://www.yahoo.com/news/obama-meet-dalai-lama-white-house-wednesday-official-224647901.html

Could you possibly have offered a more distorted view? You didn’t mention the Chinese are furious that we’ve flown over, sailed by and around their notional territory in the South China Sea ignoring (rightly) their false claims. At the same time showing up their own weakness in not being able to or having the will to stop the US Navy.

You didn’t even mention–as was mentioned in several news outlets–that on that tarmac the Chinese security officials got into open arguments with not just the Secret Service but also with their own Chinese Foreign Ministry and political officials trying to stop them.

Vkane: It’s not my fault that descriptions of Obama’s leadership read like they should be published in “The Onion.”

My report is quite even-handed, and I do mention the contentious engagement between Chinese and American officials.

I am sure you would really, really enjoy my full opinion on Obama’s, published daily here:

My, how far we have fallen in eight years.

What’s this “we” business, Kemosabe?

Has anything else happened on the trip to reinforce the idea that its a snub? I know the media wants to run with the story but I think it makes sense to see how he’s treated for the remainder. It’s really too bad there aren’t more photos.

That said, China surely knows that this President is incapable of managing the country’s finances given that the national debt is nearing $20T, and I can’t imagine they hold him in high regard.

Susan Rice was probably more miffed about the snub to herownself than Obelowme was to himself.

The man who calls himself Obama is reaping one of the many evils he has sown: disrespect.

GALATIANS 6: 7-9 (KJV) 7: Be not deceived; God is not mocked: for whatsoever a man soweth, that shall he also reap.

It’s surprising the Chinese didn’t let loose a trained flock of sea gulls to crap on him. It would have been entertaining. Maybe the North Koreans will do it.

Was it a snub? Hmmm. . . .sure seems that way considering China sent out a two person delagation named Mr. Ho-Lee Fuk and Mr. Sum-Ting Wong to deliver the news that Pres. Obama would need to exit from the rear.