POTUS pens one economy-destroying executive order last week and may soon sign another in China! 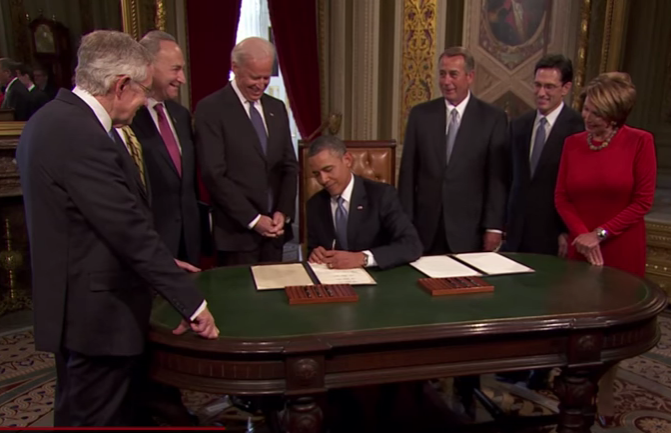 The two items President Obama has used most in the last eight years are his golf clubs and his pen.

He poised to be especially busy with his pen, as he plans to bypass the U.S. Senate and signs an executive agreement to formally join the Paris Climate Accord.

It is speculated that Obama will formally sign onto the agreement during his upcoming trip to China.

…[I]t would surprise no one if Mr. Obama and Chinese President Xi Jinping were to announce the ratification of the sweeping climate change agreement before the Sunday opening of the Group of 20 summit in Hangzhou, Zhejiang.

White House senior adviser Brian Deese said the president has the legal authority to ratify the accord without the two-thirds Senate vote required for treaties. He said the pact negotiated by 195 countries in December is merely an “executive agreement.”

“The president will use his authority that has been used in dozens of executive agreements in the past to join and formally deposit our instrument of acceptance, and therefore put our country as a party to the Paris Agreement,” Mr. Deese said at a White House press conference.

But that’s not all! He just inked an executive order taking a large part of the Maine wilderness… for “environmental protection,” of course!

President Obama turned a vast stretch of Maine woods into the nation’s newest federal parkland on Wednesday, siding with conservationists who want the wild lands protected, over residents and officials who oppose intrusion from Washington and restrictions on use of the land.

Mr. Obama designated more than 87,500 acres of rugged terrain, donated by a founder of the Burt’s Bees product line, as the Katahdin Woods and Waters National Monument, administered by the National Park Service, a day before the service’s 100th anniversary. It became by far the largest region of federal parkland in Maine, surpassing the 48,900-acre Acadia National Park on the coast.

This executive order went forward despite much local opposition! In fact, the reason the site has been desginated a monument rather than a national park is because of sustained opposition by the area’s residents, who voted it down by a 2-to-1 margin. The Maine Legislature has also repeatedly passed resolutions opposing the creation of another national park in Maine.

…There are echoes of the creation of the Cape Cod National Seashore in this situation. Predictions of loss of fishing and farming at the time have largely come to pass, although the cause is not merely the creation of the park but larger ocean forces as well. The loss of logging and hunting, the main economic driver in the Millinocket area in Maine, will hurt the remaining residents, and there does not seem to be any suggestion to replace that activity except with increased tourism.

The tourist activity that the Millinocket city fathers are so skeptical about has taken over the economy of the Cape, but it is hard to know if it is beneficial or not. The low-paying seasonal jobs have drawn an influx of J-1 immigrant workers, but have forced younger families away as the wages associated with trinket sales and clam-frying proved inadequate for raising a family.

…But the worst of this is the lack of consensus and support. President Kennedy worked with Sen. Leverett Saltonstall to provide the legislation and the framework to fairly transition the Outer Cape towns to having a national park as a neighbor, and while there have always been disputes, there has been a rough agreement that the park is a good thing. The new Katahdin Monument doesn’t have the same partnership behind it, and it will remain in limbo, albeit pristine, without it.

Once again, Obama’s pen stabs at the heart of the American way of life.

Only 139 more days before Obama becomes the former President. I hope the golf clubs see more use than the pen from this point on.

There are over 500 golf courses in China…surely he can play a few of them during the upcomng trip.

Of course this is very destructive, but before anyone gets up a head of steam about the constitutionality they should be aware that 0bama is 100% correct that there is no reason he should submit this to the senate. A president is entitled to make whatever agreements he likes, so long as he commits himself to do only those things that are within his power anyway. Such agreements have no legal force, but the president may choose to abide by them, and so may his successors, until one of them chooses not to.

Suppose the presidents of a bunch of countries all agree to paint their offices green; the president could send this to the senate as a formal treaty, and if 67 senators consent to it it would have the force of law, but he doesn’t have to. It’s entirely within his authority to paint the Oval Office any color he likes, so he doesn’t need the senate’s consent, and he can do so even if the senate votes it down.

A lot of people here seem to imagine, for some reason I can’t fathom, that if the senate votes down a proposed treaty the president is somehow barred from implementing it. That is of course ridiculous. The senate voting a proposed treaty down has no more effect than not voting on it at all, and the president is just as entitled to implement it as he was before sending it there at all.

The only reasons a president need ever ask the senate’s consent to a treaty are (1) if it requires something that the president can’t do on his own, such as making a law; or (2) to make it slightly harder for his successors to back out. Not very much harder, since a president can abrogate a treaty any time he likes, but slightly harder since until he does abrogate it it has the force of law, whereas a private agreement has no legal status at all.

So back to this Paris agreement. Over the years Congress has given the president a lot of authority over environmental matters. For instance, the Antiquities Act that he used twice this week, so unwisely, and yet so clearly within the law. So as long as he only promises to do things that he’s already authorized to do anyway, he has the right to sign it and implement it, and leave it to his successor to choose whether to keep on implementing it or not. Only if the Paris agreement requires something outside his authority would he need the senate’s permission to make it a treaty.

Your comments are misleading. You are right that the agreement has no force of law. But more, Obama can only implement those parts that have a direct bearing on the administration. An executive order, per se, is not binding on any other part of government nor on the people. It only binds the administration and those who work for him.

So … this little con seems to hinge on the idea that it’s just an accord, which isn’t a treaty so there’s no Constitutional requirement for the “advice and consent” of the Senate. Much like the odd idea that it’s perfectly legal to fire missiles at Libya if it’s a “kinetic action” because that’s not a war, which would require action by Congress.

In other words … Doubletalk. Gobbledygook. A bluff.

“The president will use his authority that has been used in dozens of executive agreements in the past to join and formally deposit our instrument of acceptance, and therefore put our country as a party to the Paris Agreement,” Mr. Deese said at a White House press conference.

That’s where the spokesman is wrong. An executive agreement commits the executive, not the country. That can only be done by Congress. All the agreement really means is that Obama and his employees—the people who work for the Executive Department—have to watch their own carbon footprints. That means no more extravagant wastes of jet fuel flying to remote golf courses. So obviously it’s a bluff; nobody’s going to give up golf junkets. And in case anyone missed the point, there will be a ceremony with the Chinese president, and the Chinese haven’t the slightest intention of actually complying with any treaty (sorry, accord) which will castrate their economy. So the whole thing is just a show. Surprise, surprise …

The spokesman didn’t say the accord would commit our country to anything, only that it would make our country a “party” to it. That much is true. Signing makes the USA a party to the agreement; but that’s a meaningless term. It has no legal status at all.

But it affects more than federal employees. There are hundreds of statutes that give the president the discretion to impose all sorts of restrictions on you and me, and by signing the accord the president will be agreeing to do that.

And in many cases those restrictions, once imposed, can’t be lifted without an act of Congress. For instance the National Monuments that the president declared this week; even if he were to change his mind, he can’t undeclare them.

Obama continues to make, with these broad strokes of a pen, a case for someone to follow him who would be more inclined to use “white-out.” I think this rules out Hillary.

She is good at wiping things clean, but I wouldn’t bet on it happening with these executive orders.

Yes. She’d be more likely to add onto his in a manifold way.

Its been a successful tactic for him so he’s being reinforced to keep using it. The loyal opposition GOP congress either can’t pass a mirror without getting fixated, or are just too comfortable with their hereditary titles. Hard to run with a ham on your back.

What exactly do you suggest they do about it? They can’t reduce his powers without 2/3 of each house to override his veto.

And that’s only his statutory powers. They can’t reduce the powers inherent in his office, but most of the time that’s not the issue. For instance the Iran deal depended on his power to unilaterally waive the sanctions, which is statutory. Corker-Menendez tried to take that power away from him, but couldn’t get the necessary 2/3.

Then I suggest they continue to sit quietly and pick their collective noses while reading the latest Williams Sonoma catalog. Maybe Frank Davis Jr has performed a serve by demonstrating how irrelevant congress is. Let the Supremes and the Monarchy make law and send the likes of McCain and McConnell home for a nap.

Q: What do you call a trade agreement signed by the president and not ratified by the Senate?

Good luck selling that on Ebay.