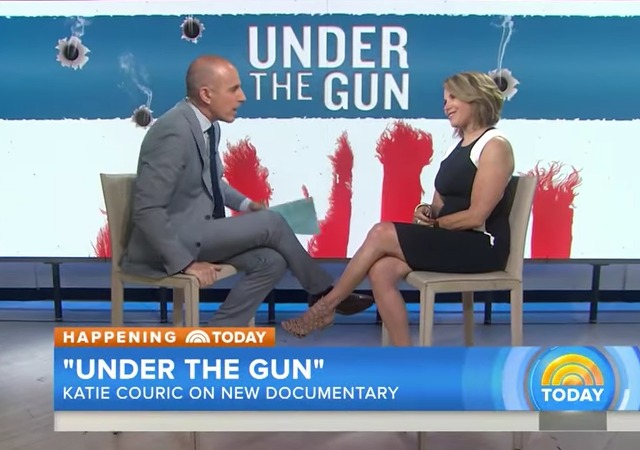 Members of the Virginia Citizens Defense League (VCDL) have sued producer Katie Couric and director Stephanie Soechtig for $12 million after an edit in their movie Under the Gun showed members could not answer a question.

“Katie Couric has publicly admitted that the film, which was presented to VCDL as a ‘documentary,’ was misleading and misrepresented VCDL,” Phillip Van Cleave, President of the VCDL, tod FOXNews.com. “However, Couric and the other filmmakers have refused to fix the film or to even stop promoting and distributing it. The only way to hold Couric accountable was to file a lawsuit.”

Here is the clip:

The group gave the full clip to Stephen Gutowski at Washington Free Beacon:

Couric eventually accepted blame for the deceptive edit. Soechtig apologized for her behavior and admitted she made the edit.

Good.
Hit them where it hurts.

Yes, right in their reputation (such as it is).

Maybe Catie can hire that lawyer that defended Gawker.

It’d be a nice fund for the VDL to continue to press against the anti’s. Hopefully they win every bit of the lawsuit.

She suddenly has a problem with wanting to “spread the wealth around?”

The leading cause of human mortality is a scalpel casually applied to dismember a captive human life in the privacy of abortion chambers. She must have an ulterior motive to oppose armed self-defense. It is not for the children (a.k.a. Posterity).

While the VDL is not a public figure, the ability and probability of winning is close to nil.

Neither collected a dime

anytime you get interviewed, have your own camera crew

I have always despised that left wing POS. Tear them to shreds.

But it keeps the case in the public eye, and it forces Couric and Soechtig to defend their unethical behavior (including all associated legal costs). The Left is not the only entity capable of waging “lawfare”.

Another happy side-effect: the more people are aware of Couric/Soechtig’s unethical actions, the fewer will be willing to interview with them (especially without back-up independent recordings). They’ll have a MUCH harder time repeating their antics in the future.

The last time Couric had anything worthwhile to say, she had a camera rammed up her arse.

For those who aren’t old enough, Couric had a colonoscopy of hers broadcast live. During the course a colonoscopy, a rubber tube with a camera is inserted up the “back passage” to take a good look at the inside of the colon all the way around to the appendix end.

I understand the proper moral outrage at the typically duplicitous and lying behavior and actions of Couric and her crew, but I really can’t see the basis for the lawsuit.

Isn’t the Virginia Citizens Defense League, and its members, in the public debate arena with respect to 2d amendment issues? Doesn’t that make them public figures and not private citizens for purposes of libel law? Does a 9 second gap “making us look dumb” amount to a presentation of false facts that is either done with malice or done with such reckless disregard of the truth as to amount to malice?

I think Virginia Citizens Defense League will be “poured out” early and will be lucky if it doesn’t have to pay Couric and etc.’s legal bills.