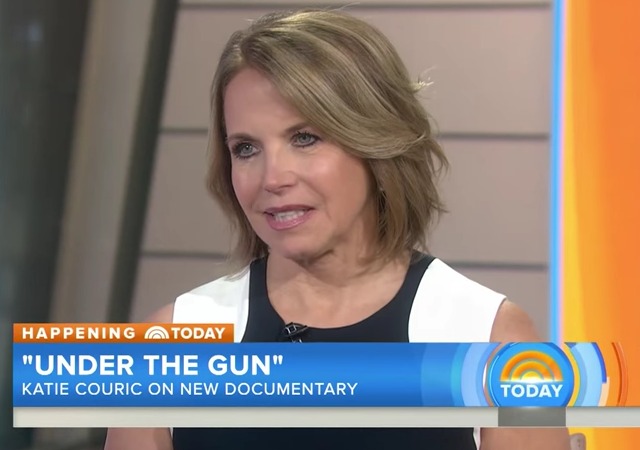 Katie Couric’s documentary Under the Gun edited out remarks by a guns rights group to make them look unprepared for a simple question.

Couric sat down with the Virginia Citizens Defense League and asked them, “If there are no background checks for gun purchasers, how do you prevent felons or terrorists from purchasing a gun?”

The clip shows the members sitting silently for around nine seconds, but audio provided to the Washington Free Beacon‘s Stephen Gutowski shows the group provided an answer.

Here is the clip from the documentary:

The group gave Gutowski this audio:

Philip Van Cleave, the president of the organization, said “[V]iewers are left with the misunderstanding that the members had no answer to her question” due to the deception.

“If you’re a felon and you’ve done your time, you should have your rights,” one of the Virginians responded.

“Well the fact is, you do have statutes both at the federal and state level that prohibit classes of people from being in possession of firearms…” another man responds. “What we’re really asking about is a question of prior restraint, how can we prevent future crime by identifying bad guys before they do anything bad. And the simple answer is, you can’t.”

Epix, the channel that aired the documentary, told the Free Beacon:

“Under the Gun is a critically-acclaimed documentary that looks at the polarizing and politicized issue of gun violence, a subject that elicits strong reactions from people on both sides. EPIX stands behind Katie Couric, director Stephanie Soechtig, and their creative and editorial judgment. We encourage people to watch the film and decide for themselves.”

Gun rights advocates have criticized the documentary since it aired on May 15. The producers filed the show with gun control advocates, but lacked experts from the right:

And even when the film gets its facts right, it often makes little attempt to explore both sides of an issue. While everyday gun owners and activists make numerous appearances—some flattering and some definitely not—pro-gun experts are sorely lacking. Gun-control advocates are well-represented by folks like Daniel Webster of the Johns Hopkins Bloomberg School of Public Health, Robyn Thomas of the Law Center to Prevent Gun Violence, and Mark Follman of Mother Jones. Viewers are left believing that there are no similarly well-informed researchers and journalists on the right.

John Lott—the most well-known researcher on this issue who takes a pro-gun view—mentioned on Twitter last week that he was interviewed for about four hours for Under the Gun. He suspected his comments would be shortened to a few minutes; in fact he doesn’t appear at all. Another strong possibility could have been Florida State University criminologist Gary Kleck, who supports background checks but is highly dubious of many anti-gun claims, or Eugene Volokh, a prominent constitutional lawyer who often writes about gun issues.

Gee Katie, I do believe your actions constitute an admission. If you oppose guns then you have to lie about them.

Even the WaPo is having none of their BS. Good!

Ever since Katie’s high point of investigative journalism (her on the air colonoscopy with Matt Wower giving the play by play from the studio), it’s been all down hill.

BTW, the colonoscopy was deemed 100% truthful, showing her to be the total ass we’ve all come to know and loathe.

I guess Dan Rather taught her a few things on the way out the door.

6% of the population trusts her accuracy, and that number is dropping.

I’m going to take your word for it. The clip is almost 5 minutes long which is 6 minutes longer than I will listen to or watch any liberal crap.

Katie Couric has a history of falsely editing an interview for political purposes. She got away with it, before.

This will get her a merit badge from the feds.

The last appearance by Katie that was informative was the video with the ass cam up her butt.

And remember to NOT watch this so called documentary (critically acclaimed by Who?) so that they don’t get the ratings.

Remember it’s all about the ratings. If some people are misinformed or purposely misled, that’s just a bonus.

So don’t watch it and deny them their payoff.

The fact that these people choose to be interviewed by Katie Couric really surprises me. What did they think would happen? And such an interview will always be one sided when anti-gun liberals control the editing. This is what makes them look dumb, not the editing.

Katie Couric should have been adjudicated “insane.”

The same thing happened with the open carry guys who interviewed with Jon Stewart. They knew it was going to be rough, but the chance to make the Brady Center look like a bunch of homophobic bigots was worth it.

When you have the superior argument, there is no need to lie. The mere act of lying with their creative editing clearly demonstrated how corrupt their viewpoint is.

At any interview bring your own cameras and recording equipment.

The inevitable result of acceding to the fiction that happy-face morning show talking heads are in any way journalists.

This is from the Free Beacon story about this incident:

>> ‘Under the Gun’ bills itself as a documentary that “examines the events and people who have kept the gun debate fierce and the progress slow, even as gun deaths and mass shootings continue to increase.”<<

The last clause is blatantly false, at lease when measured over the past two decades. Gun deaths have declined 49% during that period.

More lying propaganda. We're in a post-truth world where feelz is all that matters.

P.S. There is some evidence gun violence has been increasing in the past year or two. Obama has taken the side against the police – the wrong side – in most of the high profile incidents the Left and media gin up: Professor Gates (beer summit fame); Ferguson; Trayvon Martin; Freddy Gray. Obama has delegitimized and stigmatized effective policing. Rising murderous violence is the result. But prior to Obama adopting a policy of delegitimizing police, the murder rate trend had been going down dramatically.

Time to show Katie the door.

If anyone is surprised that Couric lies, all you have to do is look at other prominent liberals. hillary, obama, holder, koskinin, reid, schumer, gore, slick willie, pelosi and right on down the list. They have all been caught in big lies that had consequences but were not held accountable for their lies. I didn’t even get into the msm and their lies or omissions, that are the same as lying, because there are so many. When the people who should be judging them lie, then their are no judges.

Reason.com did some “creative editing” of Katie Couric, and it’s epic:
https://www.youtube.com/watch?v=4QSlSYeNBkI