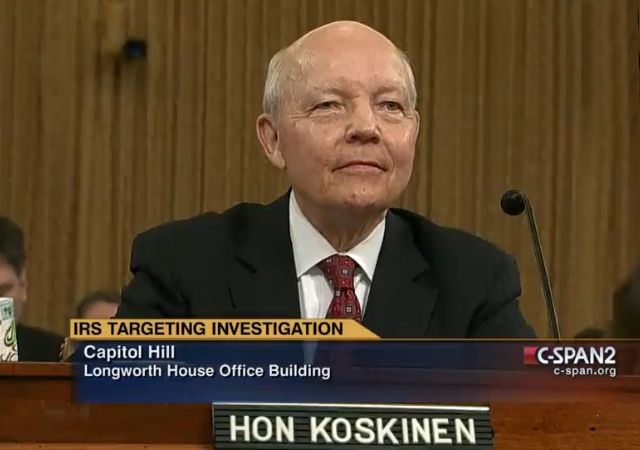 I recently noted that President Obama’s climate change edict for our national security strategists shows that he does not take warfare against American opponents seriously.

However, the President takes citizen opposition very seriously. For example, he is unleashing one of his most potent tools against Americans opting out of purchasing Obamacare.

Over 20 million Americans opted to pay a penalty rather that purchase health insurance. So, the Internal Revenue Service (IRS) has just sent them a formal letter suggesting they make a different choice.

…Getting a letter from the IRS can be a threatening and nerve-racking experience; it seldom is seen as a suggestion and more of a threat. But at President Obama’s direction, the IRS is “reaching out” to people who paid the tax penalty for not buying mandatory health insurance or who claimed an exemption in hopes of “attracting” more people to sign up for ObamaCare insurance. The government is particularly interested in compliance from healthy young people.

Congress is not happy. “We strongly object to any action by the Administration to improperly use sensitive taxpayer information to identify and harass individuals who have rejected the Patient Protection and Affordable Care Act (ACA) by choosing to pay a tax rather than be forced into a health care plan they don’t need and don’t want,” House Majority Leader Kevin McCarthy, Majority Whip Steve Scalise, and Ways & Means Chairman Kevin Brady said in a letter today to IRS Commissioner John Koskinen.

They warned the IRS about the use of “protected taxpayer information” and sent Koskinen a list of sharp questions demanding more details about how the IRS plans to “reach out directly to individuals” and how the Department of Health and Human Services will be involved in encouraging “their compliance with the individual mandate.”

Perhaps the IRS might be more inclined to be less bold in these matters if its regulators face actual penalties. However, we are at Day 1234 of the scandal involving that agency targeting Tea Party groups for denial of nonprofit status and Congress has delayed bringing an impeachment vote against Koskinen.

The last-minute deal struck Wednesday night may merely postpone the unprecedented step of formally accusing John A. Koskinen, 77, the head of the I.R.S., of “high crimes and misdemeanors.” Never before has an executive branch official below the cabinet rank been impeached, and not even a cabinet member has faced such proceedings in 140 years.

Lois Lerner, the IRS bureaucrat who gleefully targeted citizen activist groups, is currently enjoying a full pension and a $129,000 bonus.

For these reasons, a diverse group of organizations have banded together to form the First Amendment Alliance, a nonpartisan groups focused on protecting the free-speech rights of nonprofits.

…[T]he First Amendment Alliance (1AA) has swelled in size, now totaling over 50 groups that represent every segment of the political spectrum and civil society. The 1AA’s mission is to prevent the IRS from implementing Regulation 134417-13, otherwise known as the IRS muzzle rule….

…The muzzle rule — initially introduced by the IRS in 2013 — aims to redefine the meaning of “electioneering” to include constitutionally protected speech, such as news reporting and issue advocacy. As TRI has previously noted, the agency’s proposed definition of electioneering is so broad that any discussion of politicians, their voting records, or even the mere mention of a political candidate’s name, is enough to have an organization stripped of its tax-exempt status.

The “muzzle rule” is slated to be effective on Oct. 1 of this year.

The SoCal Tax Revolt Coalition, of which I remain an active member, is one of the 50 groups that has joined. The organization’s President, Dawn Wildman, explained the motivation behind this new organization.

“Between the election, terrorism, and other issues, the IRS and other bureaucracies have become even more entrenched and powerful”. Our freedom of speech goes to the very essence of our liberty and guaranteed rights in this country. The IRS continues to abuse its power against those perceived to be enemies of this administration”.

Just imagine how different the news would be if the Obama Administration targeted our real opponents so vigorously, cleverly, and passionately!

Cut the IRS budget until they have to sell magazines door to door to keep the lights on.

That’s a good idea, but the Republican congress will instead opt to hold televised hearings.

The problem here isn’t keeping these orgs away from nonprofit status, the problem is the unequal playing field of all the liberal political groups enjoying non-profit status while conservatives were targeted.

For me, I don’t need a tax benefit to put my money where my beliefs are.

Like my health care, I don’t think government has any place in my giving. In fact, I prefer the government remain in the dark about it. Period. Put it in the “nunya” file.

It’s worse than that.

Liberal groups are massively funded by the taxpayers.

Fix that, and everything we think we know about politics in the U.S. will be radically transformed.

The problem is when the IRS is used like a weapon against common ordinary Americans.

What does the lack of action by a GOP controlled congress on this reality tell you about the GOP?

It’s all about control — and in this case especially, control of information. We’ve seen before how ostensibly “confidential” information about a group’s donors and staff can (and has) resulted in unremitting harassment not only by the IRS, but by fellow federal agencies like the FBI, etc.

No. This has to stop. The current bureaucracy learned that they could do it once, and so it is easy to manipulate the loopholes to do it again. The rules, such as they are, are not being — and have not been — applied equally across the board, and it has become painfully obvious that the entire process of becoming a tax-exempt organization has become one of gamesmanship more than anything else.

Sorry, no way to separate the politics from the sausage, folks.

“We hold these truths to be self-evident, that all men are created equal, that they are endowed by their Creator with certain unalienable Rights, that among these are Life, Liberty and the pursuit of Happiness.

That to secure these rights, Governments are instituted among Men, deriving their just powers from the consent of the governed, That whenever any Form of Government becomes destructive of these ends, it is the Right of the People to alter or to abolish it, and to institute new Government, laying its foundation on such principles and organizing its powers in such form, as to them shall seem most likely to effect their Safety and Happiness. Prudence, indeed, will dictate that Governments long established should not be changed for light and transient causes; and accordingly all experience hath shewn, that mankind are more disposed to suffer, while evils are sufferable, than to right themselves by abolishing the forms to which they are accustomed. But when a long train of abuses and usurpations, pursuing invariably the same Object evinces a design to reduce them under absolute Despotism, it is their right, it is their duty, to throw off such Government, and to provide new Guards for their future security.”

If Hillary or her surrogate Lester Holt pushes him on the release of tax returns he should say “why would I do that after Obama weaponized the IRS?” See Koskinen and Lois Lerner – and telll America that she will be worse in using the IRS against her enemies.

You have that right. Nixon had an enemies list, hateful hitlery has a NYC telephone sized book of payback to her enemies.

The muzzle rule — initially introduced by the IRS in 2013 — aims to redefine the meaning of “electioneering” to include constitutionally protected speech, such as news reporting and issue advocacy.

While I think I understand what they mean, this is very poorly worded. Even outright electioneering — openly telling people to vote for or against a specific candidate — is constitutionally protected. So is lobbying Congress. And yet just about everyone agrees that tax-exempt organizations should not be allowed to engage in these two constitutionally protected activities; if an organization wishes to do so, let it pay taxes like everyone else, and let its donors pay taxes too.

So constitutional protection is not the appropriate criterion here. The point here is that they should not lose their exemption for educating the public about important issues, merely because that education is likely to influence people’s voting decisions, or Congress’s spending decisions. Not because such education has greater constitutional protection than outright electioneering, but because it’s important and ought to be encouraged.

Over 20 million Americans opted to pay a penalty rather that purchase health insurance. So, the Internal Revenue Service (IRS) has just sent them a formal letter suggesting they make a different choice.

He needs to be careful here. The Supreme Court said that it’s a constitutional tax rather than an unconstitutional penalty precisely people are free to pay the money rather than buy the insurance, and it’s low enough that many people will find this a reasonable choice.

If the government gently encourages people to make one choice rather than the other, that’s fine. But if people get the impression that they don’t have a choice, that they must buy the insurance, or if the rate goes so high that paying it is not a reasonable choice, then it will be a penalty, and thus unconstitutional.

The GOPe’s cowardice or corruption is another potent weapon of Obama’s – and probably his best, given it is the only force that can stop his insanity.

“So, the Internal Revenue Service (IRS) has just sent them a formal letter suggesting they make a different choice.”

I’d say this is akin to a Mafia wiseguy “suggesting” that a business owner pay him protection money.

The “Honorable” Koskinen. What is honorable about feces? I want to see more citizen journalist hound these sumbitches right into the nut house.