On Birth Records, Cuomo Also Surprisingly Mentions That Obama ‘Wouldn’t Put Them Out’ 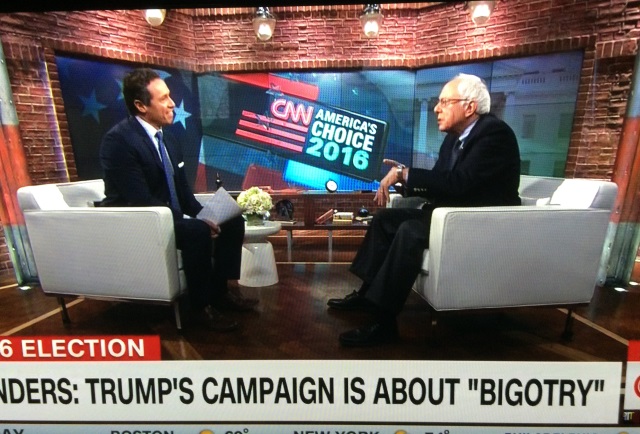 Surprising candor from Chris Cuomo . . . CNN host Cuomo was discussing the Obama birther issue with Bernie Sanders this morning [it’s expected that Trump will make a statement on the matter today.] Sanders mentioned that no one ever asks whether he was born in America despite the fact that his father was born abroad [in Poland.] Ever on the alert for racism, Sanders suggested the reason has to do with the color of his skin [see screencap of Sanders pointing to his skin.]

That’s when Cuomo said something surprising: “you don’t think it was about the fact that the records seemed a little sketchy, that he wouldn’t put them out?” Shocking to see Cuomo say something not aligned with the MSM bandwagon, which of course continues to excoriate Trump for ever having raised the issue.

Note: apologies to our readers for the less-than-stellar video quality. I wasn’t set up to record it normally.

CHRIS CUOMO: Were you born in America?

SANDERS: I’m going to announce to you, yes, I was born in America. And maybe it had something to do with the color of my skin. That’s what that whole business was about.

CUOMO: You don’t think it was about the fact that the records seemed a little sketchy, that he wouldn’t put them out? You never bought into any of that?

I’m going to make a wild guess. The Pole who came to the US in 1917 and later sired Bernie stayed in the United States and became an American. I know, it sounds odd, but it is what people who came to this country used to do. That might be a contributing factor more than anything else.

2. The documents published by the Obama Campaign were sketchy.

3. This is exactly the same reaction that a white guy, Dan Rather, drew when he raised an issue about President Bush’s service, and published a sketchy document as proof.

In my opinion, pretending there is a race issue under these circumstances suggests questionable ethics on the part of Mr. Sanders.

Was Obama’s publisher racist for saying he was born in Kenya?

That bio was on the publisher’s web site for about 10 years before it was fixed. This was during the heady “dot com” days when everything web-related got everybody breathless. I refuse to believe that Obama and his acolytes didn’t view that bio hundreds or thousands of times over that decade. Why didn’t they ever correct it? At minimum he’s guilty of riding the affirmative action gravy train.

Mark– Thanks for watching MSNBC so we don’t have to.

You’re very welcome, though in this case I strayed from my normal MSNBC beat and checked out CNN!

I haven’t been following how the birther thing came up again. I assume the Democrat Media Complex must be terrified by polling showing Trump is doing better than expected with blacks. So they revived the birther issue as pseudo “evidence” of Trump’s racism to scare blacks away from him.

Hillary now has as surrogates: almost the entire Democrat Media Complex; Bill Clinton; Bernie – who quit the Democrat Party again after they rigged the primaries against him; and reportedly they are trying to talk Al Gore into flying around spewing CO2 to frighten everyone about climate change on Hillary’s behalf.

Since I have this lovely tin hat, Hillary’s little speech trip to NC yesterday wasn’t very impressive and the whole conversation stayed on how great of a week Trump had. I’m going to guess that Hillary’s camp trotted out this little game to get Trump to say something stupid that would suck all the air out of the weekend talk shows.

Most likely it was something they had ready for the debates and decided to pull the pin earlier.

I have to agree with the camp that says Trump trolled the heck out of the media this morning…. 90 minutes of attention that was pretty much all positive. “Look at the hotel that my company built, that opened on time, under budget, and has employed lots of people” – “Look at all these nice military folks that like me”…. That was a darned masterful play. The PR Guru in my absolutely appreciates it.

I saw an interview on CNN of Kellyanne Conway, where the interviewer says that Trump lied. Conway then comes back with “Are you calling Trump a liar? Whenhe’s running against the Clinton’s the biggest liars in Washington.”

Let me remind everyone of something. The birther movement was originally started by Hillary. She did it during the 2008 primaries.

Here are the problems for Sen. Sanders in attempting to always find a SJW narrative.

1. The father of Mr. Sander immigrated to the USA and later became a citizen unlike the father of Sen. Obama who was here in the US only on a student visa.

2. In 1991, Sen. Obama’s literary agency Acton & Dystel wrote in his bio that he was “born in Kenya and raised in Indonesia and Hawaii.” Without question Mr. Obama saw this publication and sent it proudly to his family. Yet even according to the agency not a single person ever told them the information was wrong.

3. The genesis of the “birther stories” as even Politico and Factheck concede is from supporters of Mrs. Clinton during the 2008 primary. Sure the stories were recycled for years and why when Pres. Obama could have ended the speculation in 2008 by simply releasing his birth record yet he chose to play coy and allow it to fester. I get it, it made a great diversion as now you can say that anyone that questions your birth is of course, “racist”.

4. Folks seem to forget that before Sen. Obama’s citizenship became a question for any single Republican in February 2008 Sen. McCain had his “citizenship” questioned by political pundits including NBC News. Fact is before the GOP began questioning Sen. Obama (as he had not become the nominee yet) the Senate passed a non-binding agreement that stated Sen. McCain was “eligible” to be president in May 2008.

IMO, Pres. Obama liked being the “international guy” and played that role. His father was from Kenya his mother an American who married an Indonesian and his Grandmother the first VP of a Bank in HI. His “upbringing” was one of moderate privilege (private school in HI) and he had lived abroad for several years with his mother and step-father. Mom was working on a doctorate degree in anthropology and beyond the mentions of a “Frank” in his book “dreams of my father” there is evidence that his grandparents were friends with Frank Marshall Davis. Hell, Mr. Obama (then State Senator) gave a speech praising how as a young man “Frank” helped me learn about dealing with “white people” which is odd considering the young Barry Obama lived with his white grandparents in a white community and attended a largely white school. But I guess “chum” does make you paranoid. I digress, Sen. Obama, IMO, embraced and cultivated the roll of “internationally born and raised abroad with roots deep in Kenya”, even if he had only spoken with his father once when he was ten and even if he knew it was a lie. It gave him cache and made him look more “worldly”.

Didn’t know bernie was relevant anymore. Thought he took his loot and decided to stay at his third house. The one on the lake.
Greed, it isn’t just for capitalists anymore.

For me, Obama started the birther issue when he put up a birth certificate that was a PDF. There are 9 pictures in that PDF, but it should only have one. I could take each picture and show it separately and show what they covered. It would make an interesting video, but I supposed it would immediately get banned. So what is the point of making it?

I think Frank Marshall Davis is his daddy. Have you seen their pictures compared and Davis’s children’s photos compared to Obama?