BDS “solidarity” and “intersectionality” are excuses for exploitation of other Peoples and causes. 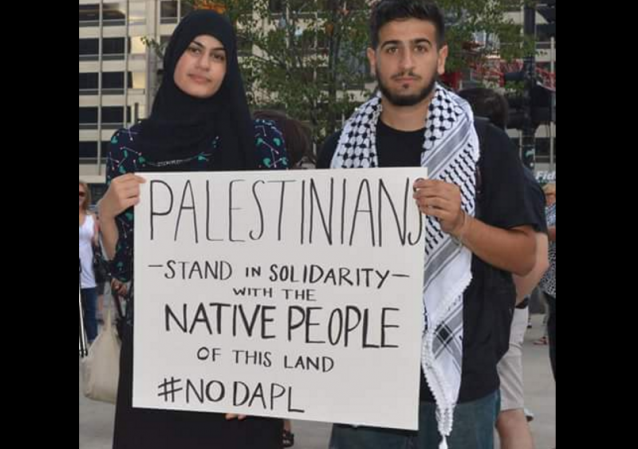 An informative approach to the anti-Israel Boycott Divestment and Sanctions movement is to understand the nature of the BDS movement, and how it infiltrates, exploits and ultimately subjugates other Peoples and causes to the anti-Israel purpose.

I have explored the numerous examples of such subjugation in my post, BDS is a Settler Colonial Ideology:

One of the foundational claims of the anti-Israel Boycott, Divestment and Sanctions (BDS) movement is that Israel is a settler colonial project without legitimacy.

But as with the Black Lives Matters, LGBT, environmental and other movements, BDS proved damaging [to American Indian Studies]. BDS was capable of taking over the intellectual territory of other peoples, but it was not for the benefit of any movement other than BDS.

Viewing BDS as Settler Colonial Ideology helps us understand and explain not only the BDS intellectual approach under the guise of solidarity and intersectionality, but also how BDS operates its ground game.

Solidarity isn’t solidarity when BDS is involved, it’s a ruse to take over and repurpose other causes, and that recognition is beginning to catch on, Viewing BDS as a Settler Colonial Ideology is gaining traction.

Another example has showed itself in recent weeks during protests over a pipeline to run through Standing Rock Sioux territory and burial grounds. The protests gained national attention, and at least for the moment have been resolved when the Obama administration agreed to temporarily halt construction and reevaluate approvals for the project.

As these protest grew, the usual BDS suspect groups latched onto the Standing Rock Sioux’s cause for the specific purpose of tying it to the Israeli-Palestinian dispute.

The official BDS Movement website issued a call to action, From Standing Rock to Occupied Jerusalem: We Resist Desecration of our Burial Sites and Colonizing our Indigenous Lands. The poster, which has been shared widely, incorporates the #nodapl hashtag used for the protests over the pipeline:

The Palestinian BDS National Committee (BNC), the largest coalition in Palestinian civil society that leads the global BDS movement, sends a message of solidarity to the sovereign Standing Rock Sioux Tribe. The people of Palestine supports you and all those standing with you right now in North Dakota to protect your tribal lands and resist the desecration and destruction of your sacred burial sites at the hands of the Energy Transfer Partners corporation and the Dakota Access Pipeline they are building….

Palestinians understand all too well how settler-colonial authorities use resource extraction and other economic and bureaucratic pretences as a way to solidify control over indigenous land and dispossess indigenous people….

The BNC is committed to building stronger ties of solidarity between our peoples and movements, and we will work with our partners in North America to make this a reality. From Palestine to Standing Rock, we shall stand united against colonialism, corporate criminality and for our inalienable right to freedom, justice and equality. 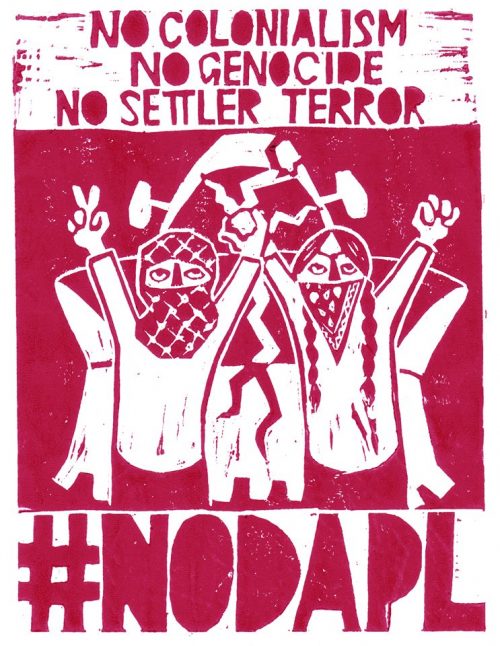 Of course, it is the Arabs who launched a wholesale desecration of Jewish graves in and around Jerusalem, particularly on the Mount of Olives, after its capture by Jordan in Israel’s War of Independence. To this day the cemetery is not safe from local Arab terrorists and Jewish graves are desecrated. But I’ve yet to see a pro-Israel group try to exploit the Standing Rock Sioux cause to use against the Arabs.

The Palestine Youth Movement (PYM) also put out a statement exploiting the issue:

We, the Palestinian Youth Movement – United States Branch, stand in solidarity with Standing Rock Sioux, the Great Sioux Nation, and our other Native sisters, brothers, and siblings in the fight against the Dakota Access Pipeline (DAPL), which will span across four states, North Dakota, South Dakota, Iowa, and Illinois, and cross over the Missouri River….

As Native communities face an ongoing genocide and continue to resist the imperialist settler-colonial regime of the United States, Palestinians are too experiencing a genocide and ethnocide within our homelands from the settler-colonial state of Israel. Native communities have been displaced and relocated, just as Palestinians face mass internal displacement, home demolitions and life in exile from our homeland. Native communities continue to face the destruction and degradation of their land and water with restricted access to resources and delegitimization of sovereign authority and of treaties. Palestinians live under a structure of apartheid, militarized occupation, and settler-colonialism, which too has lead to the pollution of and lack of access to drinkable and potable water within the West Bank, Gaza, and refugee camps. This imposed structure by Zionist(4) forces has denied the Right of Return to Palestinians who wish to visit or live on their ancestral lands, has resulted in the disintegration of farmland to build settlements, uprooted native plants to replace them with plants that are foreign to native soil and invasive species, and built state-sponsored institutions on top of historic cemeteries and homes.

As Palestinians in the United States, we are exiled from our homeland while living as settlers upon Turtle Island. It is imperative that we demand recognition of the rights of Native nations and their people while building movements together with one another so that we can strengthen our collective call for justice. 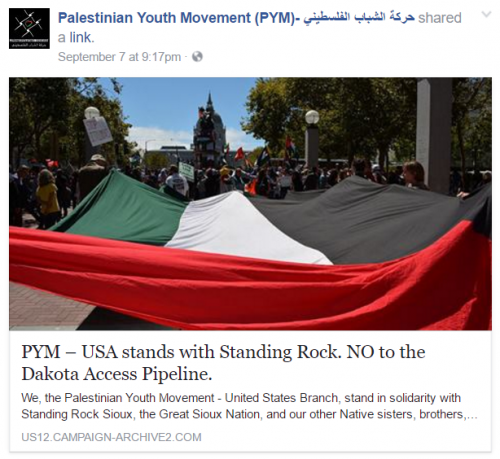 PYM also set us a GoFundMe page to raise money for PYM members to travel to the pipeline protests:

Family and friends – Please donate to support a group of Palestine activists and allies heading to North Dakota to collectively protest and say #NoDAPL.

A minimal donation will help cover travel and sustenance for caravaners. This includes gas, van rental, food for our journey and camp supplies during our stay. A majority of donations will contribute to our collective offering to camp tribal leaders. All donations collected after September 19th will go directly to our Native comrades and siblings at the Camp of the Sacred Stones and the Red Warrior Camp.

Any amount of money helps. Let the Native community know that we stand with them in their fight against DAPL and all attempts to erase and destroy their history and tribal lands.

The discredited U.S. Campaign to End the Israeli Occupation, which was denied meeting space recently on Capitol Hill because of its toxic and fanatical anti-Israelism, also moved to exploit the Standing Rock Sioux. In a mass email, the U.S. Campaign attempted to inject itself into the pipeline controversy:

While working to end all US support for Israeli settler colonialism that continues to steal the land and resources of the indigenous Palestinian population, it is essential for Palestinian rights activists here to recognize the settler colonial nature of the United States and challenge the continuing denial of the rights of Native nations and their people. 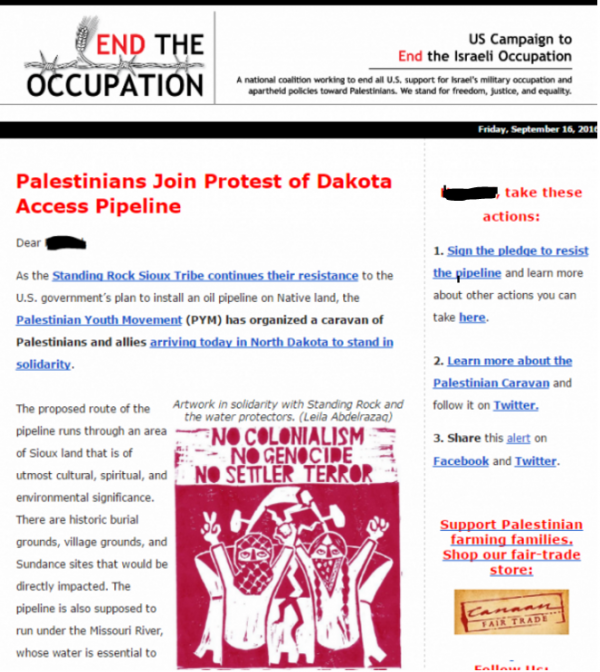 And last, but certainly not least, a group of self-described Palestinians issued a statement of support on the notoriously anti-Zionist Electronic Intifada website. The signatories were a who’s who of Israeli haters and supporters of the BDS movement. The Statement reads in part:

We the undersigned Palestinians – artists, academics, activists, elders, laborers, musicians, authors, businesspersons, attorneys, students – hereby declare our unqualified and heartfelt solidarity with the Standing Rock Sioux Tribe in their epic struggle to protect what remains of their ancestral lands, waters and sacred sites.

As an indigenous people whose lands have been robbed and pillaged, and who face existential settler-colonial expansion in Palestine, we recognize that Native American and First Nation peoples have endured centuries of violent settler colonialism that has dismantled and robbed them of home, heritage, dignity, security, narrative, land, language, identity, family, trees, cemeteries, animals, livelihoods and life.

We recognize the multitude of ways that Native American and First Nation struggles to protect indigenous territories have ultimately been struggles on behalf of all of humanity to save the Earth we share from toxic globalization of neoliberal and capitalist ethos that threaten our collective survival.

Considering that Jews were the first peoples of the Land of Israel, and the mostly Muslim Arabs of the region conquered it by force and immigration, it is hardly accurate to refer to Palestinian Arabs as the original and indigenous people. In fact, the struggle of Jews to regain their ancestral homeland has much more in common with the struggle of American Indians, but I have yet to see a pro-Israel group seeking to exploit the pipeline issue.

As took place in Ferguson and so many other places in the U.S., the Palestinian flag was raised to complete the visual takeover of another cause:

Palestine's flag joins those of hundreds of other indigenous nations at Standing Rock.#NoDAPL © Jordan Flaherty pic.twitter.com/0VWAcfT0DI

In sum, there they go again.

BDS activists acting like settler colonialists, trying to infiltrate and exploit another People and another cause as an instrument to use against Israel.

Repeat after me:  BDS is a Settler Colonial Ideology.

UPDATE 9-18-2016: Just saw this shameless image of a Native American with a Palestinian flag on his arm and Keffiyeh around his neck. Talk about cultural appropriation.

The people of Palestine stand in solidarity with the native tribes of America against corporate greed. #NoDAPL pic.twitter.com/OaYO1KsOBC

And they have always (well, since Abraham) had tribes!

BDS activists acting like settler colonialists, trying to infiltrate and exploit another People and another cause as an instrument to use against Israel.

So, will they eventually get around to the Tea Party?

Great Scott! The virus is spreading!