During his radio show Thursday, Hannity said he was “sick and tired” of certain Republicans like Paul Ryan, who ironically, is one of the few Republicans in leadership to have endorsed Trump.

“If in 96 days Trump loses this election, I am pointing the finger directly at people like Paul Ryan and Mitch McConnell and Lindsey Graham and John McCain,” said Hannity. Hannity also claimed Paul Ryan is up against, “the fight of his life,” in his upcoming primary election, even though Ryan is polling sixty-six points ahead of his primary opponent.

Hannity responded to Stephens calling him an, “asshole,” saying it would be the fault of Trump detractors if Trump loses the upcoming general election to Hillary.

If Hillary wins I will hold assholes like you accountable. You will be responsible for her Supreme ct selections..,, https://t.co/oaH1b92PFS

Wsj genius. Where were u when Boehner punted on the power of the purse a added nearly 5 trillion in new debt? https://t.co/oaH1b92PFS

Where were you dumbass when in 2014 R’s said the would stop Obama’s illegal and unconstitutional exec amnesty? https://t.co/oaH1b92PFS

It’s arrogant, elitist, enablers like you that never hold R’s accountable that created the opening for Trump!! https://t.co/oaH1b92PFS

Hannity’s overt preference for The Donald throughout the Republican primary earned the bromance a prominent spot in media mockery with memes aplenty. 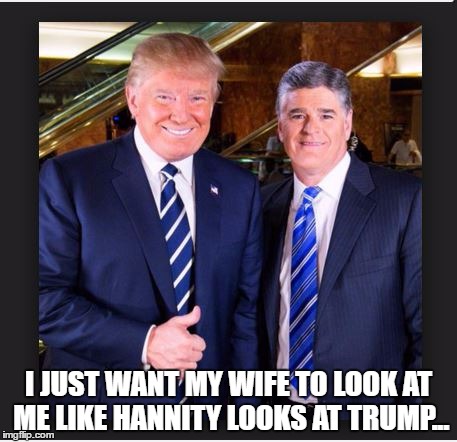 Why does @seanhannity remind me of Otto from “A Fish Called Wanda”? https://t.co/2hTspHoaPM

You can blame voters for not supporting a candidate all you like, but as I’ve said many times — no one is ever entitled to any other’s vote; votes must be earned. The failure to garner voter support is not the fault of the electorate; it’s the fault of the candidate and their campaign to find a message that resonates with voters, grow support, and ensure that support translates into votes at the ballot box.

[Featured image a screenshot from this video]

Seaneene and Rush are already starting the damage control for when T-rump loses.

I’ve caught Rush in at least 1 BS comment this AM, too!

Name several. Or ONE, lying SOS.

Then again, stunted development does what it has to.

I stopped listening to Hannity’s radio show the day Cruz dropped out. It’s cheerleaders like him why we’re stuck with Trump instead of real Conservatives who had the ground game and polling to beat Clinton.

Sixteen other Republicans fell before Trump. The primary voters gave Trump adequate number of votes to win the primaries.

If you want to blame the voters for being superficial (or naive) and taking at face value everything a candidate says in a 30 second sound bite as being true, sure, go for it. Enough of them did the deed, and it is their fault.

We have a choice of 4 candidates (Clinton, Johnson, Stein, Trump):

So, who do you vote for? or do you come to the point of view that the Republican purge of the conservatives is nearly complete?

In this less than ideal election, the crony capitalist liberal democrat it is. At least he pretends to support the 2nd Amendment, limits on abortion, national defense and lowering taxes.

The key word here being “pretend”.

Hannity has adopted the progressive, post-modern tactic of making Trump the victim of a conspiracy!

Sean, I hardly knew ya!

Why does the phrase “whiny little bitch” come to mind?

H’mmm… (stroking and tugging beard in thought) Wait! I have it! Because Sean Hannity is a whiney bitch?

If you “caught Rush in two major bullshit statements this morning”, do you think it is a new phenomenon? Do you think he just started slinging BS?

Personally, I think he has been averaging 1 piece of BS per minute for his whole career.

Hannity was the class clown before he ended his education in the 10th grade. Of all of the front line right-wing pundits, he is the only one who has never had an original thought.

I think the blame is placed incorrectly. Having open primaries did a lot of damage as well.

Hannity is a joke. After Cruz dropped out the Trump supporters quickly got to work and set their sights on Hillary in preparation for the general.

OOPS. My bad. What really happened is that they continued their asinine attacks on Cruz supporters and any potential GOP voter that wasn’t a dried in the wool Trump supporter. It was a two faced attack, claiming they didn’t need their votes while simultaneously saying it would be their fault if Trump loses. Unable to comprehend that they’d lose if they continued attacking the people they needed in November.

Instead of focusing on actually running a campaign they continued to attack much needed voters, went all lib on planned parenthood and equal work for equal pay, fell into the most obvious of traps with the Khan’s, (laid by George Stephanopolis of all people, remember the war on women much?), and simply can’t do better then a 5th grade name calling campaign against crooked-Hillary. This is a joke.

Yes, the GOP is it’s own worse enemy. It doesn’t help with gutless wonders like McCain and friends falling all over themselves to apologize for Trump. But this implosions falls square on Trump and his tone deaf supporters. This should be a layup but we have one of the most inarticulate and ridiculously unprepared candidates in the history of elections.

There are two horrendous candidates up on stage. One is corrupt, the other is an incompetent narcissist. People that hate Clinton will vote Trump, people that loathe Trump will vote Hillary. The race will come down to the middle undecideds.

Exactly the point I’ve been making to my friends who are aghast at my suspicions of Trump and the difficulty I’m having in going to drink the kool-aid they did. If you don’t need my vote, then why are you upset you’re not getting it!?

Watching anything about this election is kind of like licking your own asshole. Not only is it hard to do, it isn’t all that rewarding when you succeed.

My, my. It’s like a mini-JournoList around here. The same mystical kabbalistic words keep appearing, like cut-and-paste jobs. Repeat them endlessly, and they’ll magically become reality. Or something almost as good.

“Narcissist”. A nice big word, particularly useful because—like “fascist” or “hypocrite”—almost nobody knows exactly what it means, but it sure sounds bad.

So … which American Presidents weren’t narcissists?

James Madison, probably. And Calvin Coolidge, maybe. Eisenhower, I’d have to think about. Truman? A toss-up. Almost everybody else might just as well have been called the Narcissist-in-Chief. Even the heavyweight intellectuals like Garfield or Hoover, who should have known better.

I have no problem with narcissists, either living on my street or in the White House. What I think we can’t afford are oligarchs. A burgeoning American oligarchy was destroyed by the Civil War. But others have developed since.

What is an “oligarch”? A practical modern definition might be someone who flies to Martha’s Vinyard … to play golf.

Not all oligarchies are one. The crisis of this election is that we’ve discovered a big one, the one of which the poobahs of both parties are parts. Is this a problem? The success of the New World Order lies in merging all the important oligarchies … so that One Ring can rule them all. Yes, that’s a problem.

Is Trump an oligarch? Either yes, or potentially yes. But, somewhat surprisingly, he doesn’t seem to be part of the same oligarchy as the others. And that could be important. If not, then Novus ordo seclorum, here we come.

And yes, it’s been a slow Friday.

Of course Trump is not “entitled” to anyone’s vote just because he is the GOP nominee – even thought that used to be the grounds for voters being told to “suck it up” because even a squish like Romney would consider conservative principles better than the Dem.

But now that we’ve abandoned that “rule” it is going to be a free for all in future elections. When angry Trump supporters consider the down ticket based on how much they bashed Trump we may see Hillary getting a friendlier Congress

Perhaps what Hannity is saying is that those who choose to not support Trump shouldn’t be surprised if Hillary wins and puts the screws to every conservative principle there is. If you didn’t try and prevent Hillary getting the keys to the WH you really can’t whine and think you played bo part in it when she follows thru on every concern you ever had about her..

None of which they did of course. Had they stopped much of obama’s bs they wouldn’t be in the position they find themselves.
Blame who you want, rnc self destructed by kowtowing to obama on every issue conservatives wanted blocked.

Apparently the flock of parrots on this site is greater than I realized.
And Kemberlee Kaye is one of the Chief Assistants to the Parrotmaster. But then it’s a position with a lot of candidates here. That’s not surprising.
I’ll leave it at that.
Trump 2016. Reelect Trump 2020.
The alternative is fools, be they democrats or their allied #never T-rump, “Principled Conservatives.”

I can’t wait to tell my parents about my new job as a Chief Assistant to the Parrotmaster. They are going to be so proud.

Sean did not blame the voter, he was talking about those who run the GOP, and some Republican elected officials, creating a void that Donald J. Trump is now filling.
For that, at least, we have something for which we can thank those powers that be. Go TRUMP/PENCE 2016!

Republicans ARE to blame for Trump.

They’ve ignored their voting base for decades. The Tea Party was the last civil reaction to Establishment Republicans sticking their middle fingers in their voter’s faces and screaming “Fuck you”.

So while the Tea Party did great gains in local and state elections the Republican Elite doubled down and instead of fighting for their beliefs and against democrats they unleashed their fury on Tea Party favorites.

Well congratulations. When you insult, denigrate, and scream fuck you in the face of your base sooner or later the base is going stand up, put their middle finger in YOUR face, and say “No. Fuck You”.

Trump is the voting base’s middle finger to the Establishment. And regardless of whether or not Trump wins the Republican party, as it has been for the past several decades, is done. Maybe not next year, or in 4 years, but it will never recover. Watch how the party elites continue to grasp onto any sliver of power.

Enjoy the show. It’s going to be entertaining (And ugly) for years to come.

Man, with friends like the majority of commenters here today, who needs enemies.