Fired from his job with the Palestinian Authority after he and his wife helped save children of Rabbi Miki Mark, who was killed. 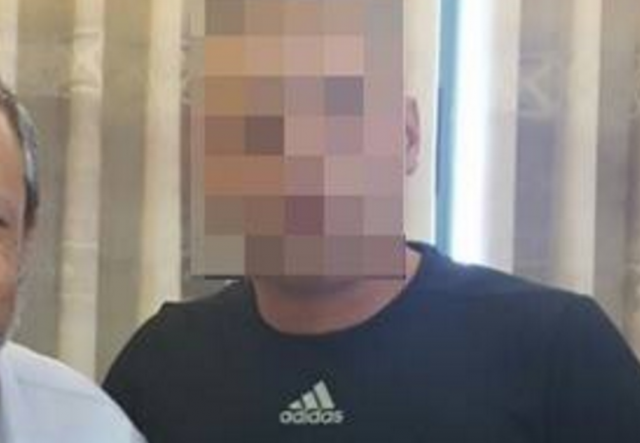 We previously wrote about the terrorist shooting attack that killed father of 10 Rabbi Miki Mark, and injured his wife and several of his children who were in the vehicle, Palestinian War of Terror – Israeli father of 10 murdered in front of his family. 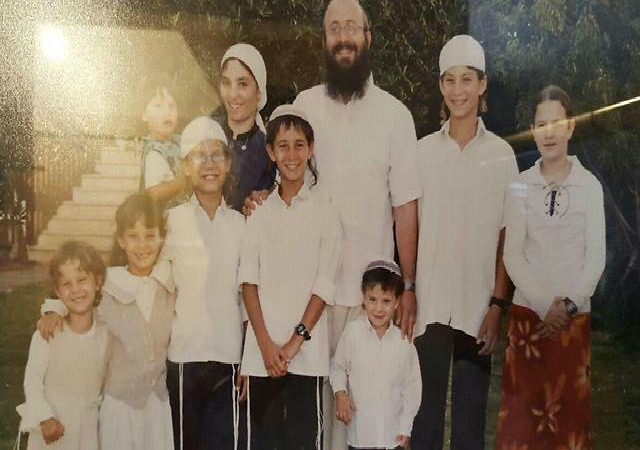 We followed up when the Hamas cell responsible for the attack was captured, and its leader killed when he engaged in a firefight, IDF brings the roof down on Hamas murderer of Rabbi Miki Mark – literally.

When the shooting took place the vehicle turned over in the road, and the occupants were left bloody and wounded. 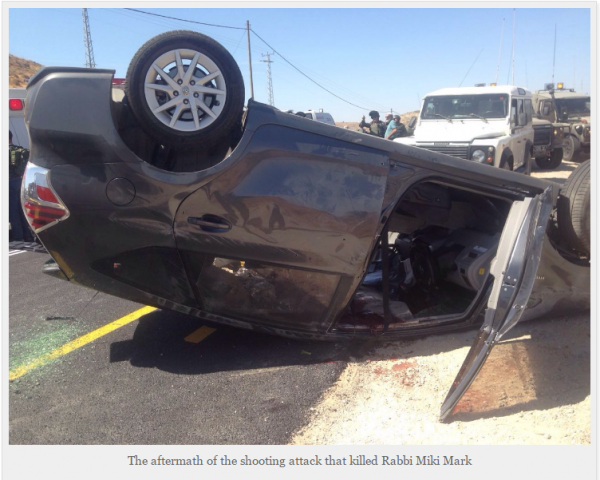 Before organized rescue help could arrive, a passing Palestinian rendered medical assistance, as reported in The Times of Israel:

In the moments after the Friday drive-by shooting attack that killed Rabbi Miki Mark outside the West Bank city of Hebron, a local Palestinian couple helped the surviving members of his family escape the overturned vehicle and administered first aid until first responders arrived at the scene.

“At first I thought it was an accident. I opened the door, which was difficult because the car was overturned,” the Palestinian man, a resident of Hebron, told Channel 2. “The girl was inside the car screaming, ‘They’re killing us,’ so I just kept telling her not to be afraid and that everything would be fine.”

After he managed to pry one of the doors open, the man, who wasn’t named in the report, said he pulled 14-year-old Tehila from the wrecked car.

He said his wife, who is a medical doctor, worked to stanch the bleeding from the teen’s abdominal wound while he called an ambulance to the scene.

“She was telling them in English, ‘Do not be afraid, we are here to help you,’” he recalled.

“I took the boy and I hugged him, I gave him some water and applied iodine, and just kept telling him that everything was going to be fine,” he said. “It doesn’t matter to me if it was an accident or a terror attack, it’s irrelevant. These are people, children, who need help, and if I can help, I will help them.The man said he then pulled 15-year-old Pedaya out of the car, and attempted to calm him.

A Palestinian man who saved the children of a West Bank rabbi after a deadly terror attack that killed him has been fired from his job, according to the head of Har Hevron Regional Council.

In a Facebook post on Sunday, Yochai Damari said that the man is now unemployed due to Palestinian opposition to his actions and should be assisted by Israel.

“I met with him and he asked me to help remove any obstacle preventing him from receiving a work permit,” Damari wrote. Such a permit would allow the man to obtain employment inside Israel. 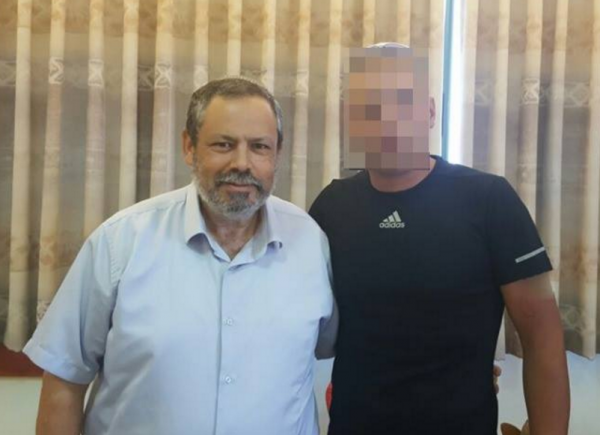 The Israel Hayom newspaper further reported that the firing was by the Palestinian Authority:

A Palestinian man who was first to offer assistance at the scene of the Route 60 terrorist attack that killed Rabbi Michael Mark and injured his wife and daughter last month has been dismissed from his public service job in the Palestinian Authority.

J., whose full name has not been made public, was the first of two Palestinians who provided assistance to the Mark family immediately following the attack. Dr. Ali Abu Sherech, a doctor from the Hebron area, also stopped at the scene within minutes of the attack and provided medical care to the family.

A relative of J.’s told Israel Hayom that “since it became clear that he was the first to arrive at the scene of the attack and that he helped the victims, he and his family have been subjected to a smear campaign and received threats.

“He is not scared, but it bothers him that he and his family have become outcasts since the event. More than anything, it hurts him that he was fired from his job in the public sector of the Palestinian Authority. They told him that he was let go because of budget cuts, but he was the only one who was fired a few days after the incident.”

The relative stressed that J. does not regret his decision to help the Mark family.

“Even in a war, you don’t hurt a wounded enemy and you provide assistance, and that is what he did,” he said. “If he could go back, he would do the exact same thing.”

If this is the way savages want to behave, tell the. We will persecute anybody that dares give aid to them:

See how the concentration camps work without any handouts.

There are good people in every population. Every one.

First thing that came to mind after reading this was the parable of the Good Samaritan.

Ragspierre is right, there are good people even where you don’t expect them and God knows who they are.

Of course he does. “Palestinians” are filled with hate for non-Muslims.

So, muslim indoctrination didn’t work on this one.

One slipped through the cracks. Like the shopkeeper killed in England.

Not many slip through.

Also, the U.S. government gives aid to the palestinian authority, and a penalty should be imposed for their action in firing the man.

Obviously. But this is old school American thinking, and not the thinking of our global elitists that wish to use us to fund the burning of the world.

query –
is he Christian or Muslim ?