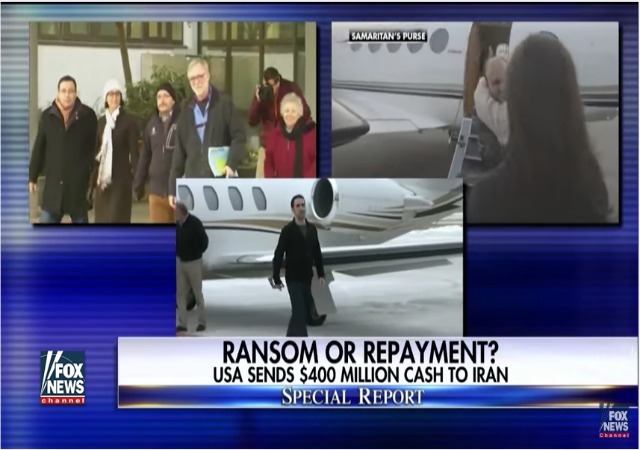 The Department of Justice did not want the Obama administration to send $400 million as Iran released four Americans due to the image it may portray. The administration struck down the request:

The timing and manner of the payment raised alarms at the Justice Department, according to those familiar with the discussions. “People knew what it was going to look like, and there was concern the Iranians probably did consider it a ransom payment,’’ said one of the people.

When The Wall Street Journal reported the payment, eyebrows indeed raised because it looked like a ransom payment. President Barack Obama said the payment “represented the first installment of a $1.7 billion settlement the Obama administration reached with Iran to resolve a decades-old dispute over a failed arms deal signed just before the 1979 fall of Iran’s last monarch, Shah Mohammad Reza Pahlavi.”

The DOJ said they did not object to the settlement, but just wanted the administration to think and schedule it for another time:

Justice Department officials didn’t object to the $1.7 billion settlement, which they viewed as a bargain given decades of inflation and the circumstances of the original deal, these people said.

But their concerns show that even within the Obama administration there were worries that the pallets of cash could send the wrong signal to Iran—and potentially to others—about U.S. policy when it came to hostages.

The U.S. has a longstanding policy of not paying ransom to hostage-takers. The issue has long been a difficult one for the Justice Department and the FBI, which was criticized last year for providing intelligence assistance to a U.S. family as it tried to buy the freedom of an American aid worker in Pakistan.

The payment also came when Iran and the West agreed on a nuclear deal. Obama celebrated the deal and the release by saying “the time was right to resolve this dispute as well.” However, Obama never mentioned that they just sent $400 million “in an unmarked cargo plane.”

The DOJ was correct. Senators do not buy the administration’s explanation.

No.
I don’t buy it.
Obama’s justice department did not oppose to anything or worried about anything.

This is only a cheap damage control operation.

I bet the DOJ just wanted to send them a boat load of Fast-and-Furious weapons instead.

They knew it would look like a ransom payment, because that’s what it was.

ran·som ˈransəm/
noun
1.a sum of money or other payment demanded or paid for the release of a prisoner.
synonyms:payoff, payment, sum, price
“they demanded a huge ransom”

resolve a decades-old dispute over a failed arms deal

As I recall … the Shah, always a firm believer in the principle of Buy American, paid for a large shipment of US items, primarily parts needed to keep American-made Iranian military jets in good repair. Then he fled the country, the Embassy was overrun and the staff handcuffed to radiators, and the Carter Admin never shipped the parts.

I caught part of Obama’s press conference where he stood there and talked down to us explaining how the timing was so critical, that in the year since the ‘agreement’ Iran has not only abided by the terms of the agreement (which the US of A public have never seen) and how even the Israeli intelligence community was glad at the outcome. I was expecting the proverbial lightning bolt to hit him at any time. He calmly berated us as he asserted that they had indeed told us about the $400 million when it happened and the fact that we only now find out it was in cash was inconsequential as because of our sanctions, the only way we could pay it was in cash. Ugh!

Question: If Israel had caught wind of this four hundred million dollar bribe going to the terrorist country of Iran and had intercepted the cargo aircraft, guided it to a neutral or friendly airport, and confiscated it, would that be a legitimate use of military force? After all, there were all kinds of suspicious illegal circumstances to the transfer, such as slipping it out from under existing court decisions against Iran.

What if Saudi Arabia had intercepted the shipment? Or worse, treated it as a drug cash shipment and shot it down?

This is going to go down as Obama’s attempt to screw up worse than Fast and Furious. I’ll bet the serial numbers on the bills were intentionally not recorded, so when they show up the wallet of some terrorist attacker, nobody can point fingers back at the source.

“Honest, officer, I paid her for picking up my dry cleaning. The fact that we just had sex was purely coincidental.”

You know, if the US was really on the ball, they would have sent the 400 million dollars in the same counterfeit notes that Iran has been trying to pass off on the world for the last thirty years.

“Here’s your trash back.”

The video Trump says he saw was real. http://www.realtruenews.org/single-post/2016/08/04/MEDIA-COVER-UP-Iranian-Cash-Video-Suppressed

If this was nothing more than a legitimate debt settlement, then why did Obama not inform Congress as he was required to do, why was the payment made in the dead of night, and why was the plane carrying the payment virtually unmarked? If this isn’t the epitome of a ransom payment made by a barefoot boy carrying a brown paper bag in the dead of night, then I don’t know what it can be other than yet another lie told by Obama and happily lapped up by his sycophants in his party and the MSM who are routinely blind to even the most heinous crimes that a Democrat (especially Obama) could ever commit.

The more important questions: From what account was the money taken from? Was the money kept off the books? If so, where?

Here are the videos of the money laden aircraft that Trump spoke about and the Washington Post and CNN denied existed.
The video was produced by Iran.

The Obama administration….and this definitely includes Hillary Clinton…..are domestic terrorists…!!! The people in the USA who support these abusers have become numb to the mistreatment by our government just like a person of domestic abuse becomes numb to their abusers.

The only way we can make America better…MAKE AMERICA GREAT AGAIN…..is to elect Donald Trump. He is our last best hope to stop the train wreak that is Barack INSANE Obama’s evil regime and his plan to haul us all to H E L L on his antiAmerican train …..!!!

The American people cannot endure four…possibly eight….more years of the Obama/Clinton antiAmerican global agenda..!! We won’t survive it….Our country will not longer be a sovereign nation..!!!

Let’s see if I got this right: the DoJ cared about the image it portrayed, but not whether the payment violated US law or whether it was stupid to give Iran money to fund its nuclear bomb program?