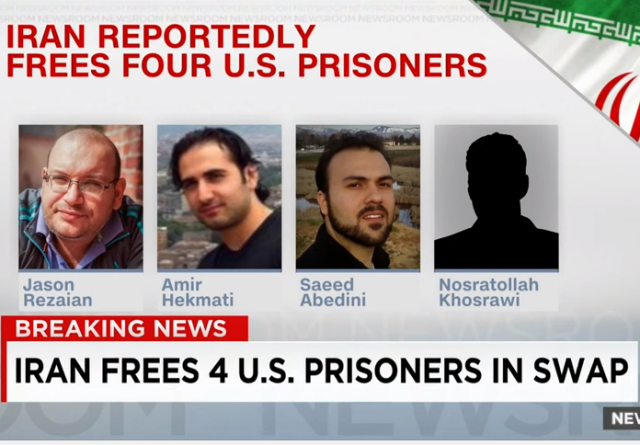 The U.S. sent $400 million to Iran in January just as the country decided to release four Americans. The administration claims they did not pay a ransom, but many have raised their eyebrows.

President Barack Obama said the payment “represented the first installment of a $1.7 billion settlement the Obama administration reached with Iran to resolve a decades-old dispute over a failed arms deal signed just before the 1979 fall of Iran’s last monarch, Shah Mohammad Reza Pahlavi.”

The payment also came when Iran and the West agreed on a nuclear deal. Obama celebrated the deal and the release by saying “the time was right to resolve this dispute as well.” However, Obama never mentioned that they just sent $400 million “in an unmarked cargo plane.”

They had to give Iran the money in foreign currency because laws forbid transactions with Iran using American money. The Wall Street Journal explained how the deal happened:

The Iranians were demanding the return of $400 million the Shah’s regime deposited into a Pentagon trust fund in 1979 to purchase U.S. fighter jets, U.S. officials said. They also wanted billions of dollars as interest accrued since then.

President Obama approved the shipment of the $400 million. But accumulating so much cash presented a logistical and security challenge, said U.S. and European officials. One person briefed on the operation joked: “You can’t just withdraw that much money from ATMs.”

Mr. Kerry and the State and Treasury departments sought the cooperation of the Swiss and Dutch governments. Ultimately, the Obama administration transferred the equivalent of $400 million to their central banks. It was then converted into other currencies, stacked onto the wooden pallets and sent to Iran on board a cargo plane.

On the morning of Jan. 17, Iran released the four Americans: Three of them boarded a Swiss Air Force jet and flew off to Geneva, with the fourth returning to the U.S. on his own. In return, the U.S. freed seven Iranian citizens and dropped extradition requests for 14 others.

Of course, officials said the timing was a coincidence:

“As we’ve made clear, the negotiations over the settlement of an outstanding claim…were completely separate from the discussions about returning our American citizens home,” State Department spokesman John Kirby said. “Not only were the two negotiations separate, they were conducted by different teams on each side, including, in the case of The Hague claims, by technical experts involved in these negotiations for many years.”

Senator Tom Cotton (R-AR) does not buy the explanation:

“This break with longstanding U.S. policy put a price on the head of Americans, and has led Iran to continue its illegal seizures” of Americans, he said.

To make matters worse, the Iranian government “arrested two more Iranian-Americans” since then. This is why Senator Mark Kirk (R-IL) is against paying ransoms:

This is one of those “appearance of evil” things, where anybody with an iota of sense would make sure that no payment could POSSIBLY be seen as a quid pro quo.

In this case, I think we’re beyond an appearance of evil, into firm “evil” territory.

Maybe Iran did not trust Obama? Maybe they insisted they wanted cash in hand before they implemented the agreement?

If the Iranians demanded cash up front before implementing the agreement then by definition the demand for cash was a ransom.

The first step in “implementing the agreement was releasing the prisoners. According to your scenario, which fits even the US version of the events, he Iranians refused to do that without getting paid first.

A demand for payment before releasing hostages is a ransom. You can either meet the ransom demand or refuse to do so. Doesn’t matter; the mere fact that Iranians would not have released the prisoners without the payment makes the demand a ransom demand.

But the ransom wasn’t only demanded, Obama paid it.

This was a ransom and it will cause more kidnappings.

Does anybody else think THAT makes the whole deal fishier ?

I am of course assuming that this >$10,000 withdrawal was reported to The Proper Authorities, like when those of us in the peasantry do the same?

I’m quite sure all the banks involved did report the transactions to the proper authorities, exactly as the laws of their various countries require. What exactly is your point here?

Would you take a check from this administration?

So Obama wants to aid and abet the Iranian dictatorship. He is really trying to turn us into an extension of the ‘caliphate’ isn’t he. I wonder if he has some kind of secret deal with Iran over Israel?

Stupidity on/ At least we can rest assured that all that cash will inure benefit the rightful owners, the Iranian people. /stupidity off.

1) US law prevented paying in US Dollars… so in foreign currency….so? Just one degree of separation. 2) Also… I bet unmarked currency which will filter into jihad VERY nicely. 3) Paying it in gold would have been interesting…. if we have any gold left… ask the British and Germans.

Iran wins with ransom money, military technology, and visual propaganda. What difference, at this point, does it make?

I’m sorry but if go to one these hellholes that you damn well know you shouldn’t be going to then I think your on your own. North Korea, Iran, Detroit should all be off limits, “enter at your own risk”

it’s a ransom all right.

I wonder how the lawyers for the terror victims who have a lien on Iran’s assets will react to this. I’ve forwarded the story to one of these lawyers and await his response.

Here is the problem with this whole deal, both now and back in January.

The Us received $400 million dollars from the government of the Shah of Iran, in 1979. That government was overthrown and the new government held our diplomatic personnel for 444 days. This was an overt act of war. Since then, the US and Iran have had no diplomatic relations and US law precludes transferring any funds to Iran. So, the $400,000,000 sits in a DOD account. Since then, there have been numerous judgements entered against the assets of the current government of Iran.

Fast forward to January, 2016. The President of the United States, as part of some esoteric deal concerning Iran’s nuclear weapons program, decides to return the $400,000,000 to the Iranian government, with which we have no diplomatic relations and to which we can not legally transfer funds. The Iranians demand interest. However, Iran is not entitled to interest, as the funds were never the property of the current Iranian government and the actions of the current government are what caused the funds to be held for the last 37 years. So, the most that the Iranians should have received was $400,000,000. And, as there have been numerous judgements entered against assets of the current government of Iran, in US courts, these judgements should have been satisfied before Iran say a single penny.

The release of the detainees, should never have been tied to the transfer of currency. If it was tied to the receipt of the funds, this is essentially state sponsored, international blackmail. It can not be viewed otherwise. And, the payment of $13,000,000,000 in “interest” is simply stupid.

And in view of such actions, does anybody have any doubt whatsoever, that Barack Hussein Obama is a traitor ?

I really don’t understand why this is bringing outrage all of a sudden. The settlement of this claim, including that the US would pay back the $400 Million in principle plus $1.3 Billion in interest, was announced by the Department of State back in January, I think it was actually on the day that the hostages were returned to the US. What, exactly, made people suddenly interested in settlements at the IUSCT?

What’s new is that this payment was made, in secret, presumably to avoid the liens on Iran’s assets.

Did he in this case? Or did he just shovel the cash over to the Iranians and thumb his nose at the law?

I have my suspicions.

Plus, under Sharia law, payment of interest is forbidden, so what (I wonder) did the Iranians call the rest of the money?