Julian Castro is unqualified for national office, despite extensive grooming by Democrats.

He is the former Mayor of San Antonio, but as I noted in May 2014, Mayor Julian Castro of San Antonio had less responsibility than Mayor Sarah Palin of Wasilla: 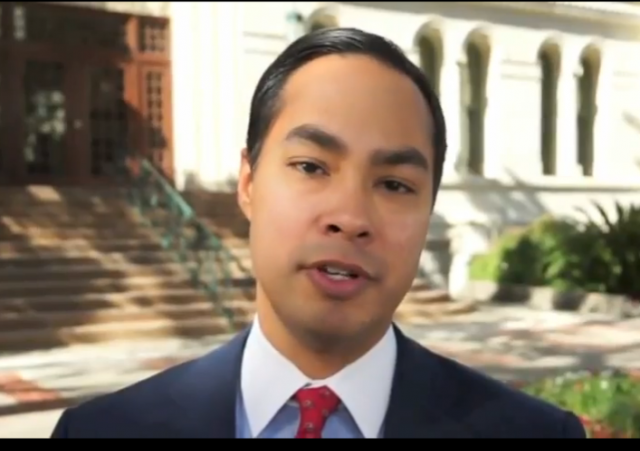 That Mayoral job was part time and mostly ceremonial, as Byron York reported:

San Antonio, the second-largest city in Texas and seventh-largest in the nation, has a council-manager-weak mayor form of government. The manager runs the city. “The office of the city manager serves as the focal point for the executive leadership and direction of the city organization,” says the website of San Antonio City Manager Sheryl Sculley. The site says Sculley, in office seven years, has “appointed executive leadership, reorganized city departments, streamlined city business systems, improved customer service and elevated the professionalism of city management.” Sculley makes $355,000 a year, one of the highest salaries for a local office in Texas.

The office of mayor carries with it no executive authority. Castro’s website says he has “focused on attracting well-paying jobs in 21st century industries, positioning San Antonio to be a leader in the New Energy Economy.” Castro’s site says he has also “brought a sense of urgency” to urban revitalization, and has created something called SA2020, “a community-wide visioning effort turned nonprofit that has galvanized thousands of San Antonians around a simple, but powerful vision for San Antonio — to create a brainpower community that is the liveliest city in the nation.”

Castro, however, had all it took to be a Democrat rising star – identity politics and good looks, as I noted in my May 2014 post:

A rising Democratic star with almost no actual managerial or policy experience, who looks good on camera, gives good speeches, has a compelling “life story,” and will energize the Democratic base through identity politics. Nah, that couldn’t work.

So what did the Democrats do to help groom the potential future leader of the party? Obama gave Castro a job as Secretary of Housing and Urban Development, so the wonder-kid could actually claim to have done something with his life other than smile for the cameras.

And Castro didn’t exactly take his role as rising star lightly and rest on his HUD laurels. No, he studied Spanish to burnish his identity political usefulness, as Politico reported in January 2016:

At home, Julián Castro’s been spending more time reading and watching television in Spanish, trying to get his speaking skills up to speed.

On the job as Housing and Urban Development secretary, he’s been carefully working the levers in Washington, with coaching from Bill Clinton and a twin brother who’s a popular and up-and-coming congressman himself.

Starting Saturday, he’ll be out on the trail for Hillary Clinton in in Nevada, Iowa and Maine.

He’s plotted his rise carefully, studying and strategizing with a clear goal in sight. But if Clinton picks him to be her running mate, it’ll be more about perfectly fitting his party’s moment and the nearly non-existent Democratic bench than about his 18 months as a HUD secretary who hasn’t left a deep mark at his agency, the White House or the housing world.

How pathetic is that?

Pathetic enough that this empty suit hitched his wagon to Hillary, campaigned with her, and now is on the presumed short list of Veep nominees along with Liz Warren and that guy from Virginia who is not Mark Warner whose name I can never remember because he’s so generic.

A report from the Office of Special Counsel delivered a mild rebuke to Castro for his handling of the April interview with Yahoo News. The seal of the Housing and Urban Development department was visible behind Castro as he answered questions from host Katie Couric about his support for Clinton, including his chances as running mate. (He said he did not think he would be chosen.) ….

The report found that Castro did not separate his role as HUD secretary well enough from his role as a Clinton supporter and referred the findings to President Obama. There was no immediate word on whether Obama planned to act on the findings.

You know where I’m going with this.

Obama took a break from the golf course to jump all over the violation of federal law by deciding to take no action against Castro. Because next week Hillary has to nominate a Veep.

The White House confirmed on Tuesday that Castro, who has been mentioned as a possible running mate for presumptive Democratic presidential nominee Hillary Clinton, won’t face any punishment after he apologized for breaching the Hatch Act during an April interview with Yahoo News’s Katie Couric.

“I think, to his credit, Secretary Castro acknowledged the mistake that he made,” said White House press secretary Josh Earnest.

This is a great time to be alive and a Democrat lawbreaker.

Just ask that other law breaker who got away with is and now sits at the top of the ticket.

As I’ve been saying for the last year: learn to spell Hickenlooper. Quiet, under the table divorce. Very public wedding in the state Capitol just in time. 3 to 1 odds is what I have it at.

too bad they can’t share adjoining cells in Leavenworth.

It gets even better professor. When Castro was appointed HUD Secretary, he was cited by the HUD IG for misusing HUD funds while he was mayor of San Antonio.

Lord I need a drink.

Castro was mayor of San Antonio? Who knew?

/Resident of San Antonio since June 1987…

He is just a perfect match for Crooked Hillary. Just another democratic criminal given a Get out of Jail card FREE

According to Jack Welch and Trammell Crow, great partnerships start with shared values.

What does HUD do?

It forces the lending industry to dole out trillions in housing loans that they borrowers can’t afford to repay, thus cratering the world economy (see US Housing Crisis, circa 2007).

It also serves as a slush fund to funnel millions to prog cronies, much of which gets funneled back to prog pols (see Bawney Fwank and his gay whore lover).

It was an audition

Did the Special Counsel make a finding that Castro had no intent to violate the Hatch Act and no reasonable federal prosecutor would bring charges?

Julian is more than just an empty suit (pants suit?), he’s also part of the “Clone” twins. If Julian was VP, would it really be him or his brother as he did while San Antonio Mayor?