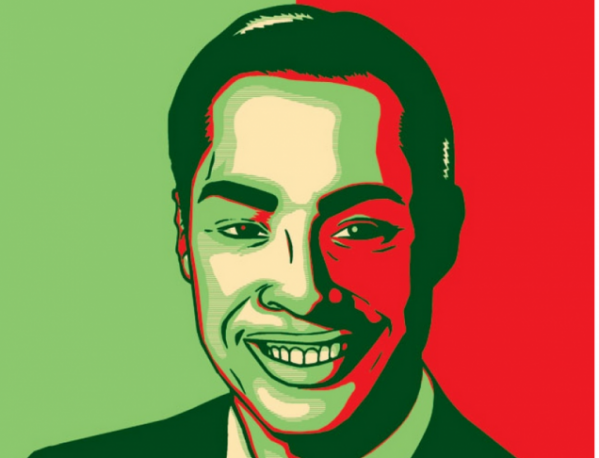 Byron York reports, in a column focused mostly on Castro’s big payday from a politically connected trial law firm, that being Mayor of San Antonio is nothing more than a superficial public relations position which pays even less than much-abused adjunct professors get paid:

San Antonio Mayor Julian Castro is widely referred to as a “rising star” in Democratic politics. There’s even talk the Mexican-American Castro could earn the vice-presidential spot on the 2016 Democratic ticket in an effort to further strengthen the party’s bonds with Hispanic voters. And now, it appears Castro’s national profile is about to rise with word that President Obama plans to nominate him to be Secretary of Housing and Urban Development.

If Castro is tapped for the job, his Senate confirmation hearings will likely shine a spotlight both on his role in San Antonio’s government and his way of making a living.

San Antonio, the second-largest city in Texas and seventh-largest in the nation, has a council-manager-weak mayor form of government. The manager runs the city. “The office of the city manager serves as the focal point for the executive leadership and direction of the city organization,” says the website of San Antonio City Manager Sheryl Sculley. The site says Sculley, in office seven years, has “appointed executive leadership, reorganized city departments, streamlined city business systems, improved customer service and elevated the professionalism of city management.” Sculley makes $355,000 a year, one of the highest salaries for a local office in Texas.

The office of mayor carries with it no executive authority. Castro’s website says he has “focused on attracting well-paying jobs in 21st century industries, positioning San Antonio to be a leader in the New Energy Economy.” Castro’s site says he has also “brought a sense of urgency” to urban revitalization, and has created something called SA2020, “a community-wide visioning effort turned nonprofit that has galvanized thousands of San Antonians around a simple, but powerful vision for San Antonio — to create a brainpower community that is the liveliest city in the nation.”

In August 2012, Jim Geraghty examined Castro’s weak credentials of accomplishment, Loud Praise for a Mayor of Quiet Record.  Geraghty linked to a San Antonio Current “BUILD YOUR OWN CASTRO CAMPAIGN POSTER” article, in which various political titles could be inserted into an Obama-like campaign poster (see featured image).  Vice President wasn’t one of them, but President, Senator and Governor were among the choices.

A rising Democratic star with almost no actual managerial or policy experience, who looks good on camera, gives good speeches, has a compelling “life story,” and will energize the Democratic base through identity politics.  Nah, that couldn’t work.

San Antonio Mayor Julian Castro is so serious about being the new Hispanic Star that he hired a tutor to teach him Spanish.

IMO that may be the best thing said about him. His mother did the right thing – spoke English in the home so her son would be an American – not a Mexican American.

Green and Red? That’s not the Ameri…ohhhh. I see what you did there. D.GOOCH

Pretty much every Texas city except the really small ones are run that way. The main difference between a mayor and a City Councilmember is that the Mayor is usually elected at large, and runs the meetings, while the members are elected to individual gerrymandered to the voting rights act districts. He has certain other minor legal duties, but that’s about it. The council hires/fires the city manager who is supposed to be a non-partisan (snicker) professional.

True. This extends to the governor’s office, also. The power in Texas rests with the lege.

We’ve seen clearly how media will help a campaign overcome issues about experience. If he is in fact being groomed for the next VP slot in a campaign, expect to see the media start to send out trial baloons with pieces to embellish and spin. They may even look for ways to downplay or simply paint over his lack of surviving significant electoral battles. Of course, that’s important for some VP candidates, but not all…

He was supposed to be a rising star.

All the Hispanics I work with who live in L.A. voted for him when he first ran.

The identity-politics novelty had worn off and they just wanted competence, no matter what color or gender.

He encouraged and supported the Occupy crowd who proceeded to occupy the grounds of city hall across the street from LAPD’s headquarters, where I work.

I’ll never forget the night when LAPD put an end to their occupation. Chief Beck was outside with his officers who were dispersing and arresting them, potentially putting himself in danger, while the mayor, who had encouraged these nuts, waited in the nice, warm, comfy safety of our lobby. What a coward and a fraud.

His moment of glory on the national stage:

This is what you get when you vote for “Hope & Change” and “somebody who looks like me,” instead of a track record of competence and success running things like states and businesses.

Thanks for that video of democracy in action at the Dem convention.

Thanks for posting that information about the L.A. mayor. Here in NYC we had the same situation in 1989 with David Dinkins who was a gentlemanly Black guy with no real experience outside of being Manhattan Borough President (largely a ceremonial role) who used to wax poetic about NYC being “a gorgeous mosaic” and his incompetency (as well as his pandering to Black militants) for four years resulted (thankfully) in the election of Rudy Giuliani. People voted for Dinkins for the same reasons they voted for Obama – they wanted to show how not racist they were although in reality by voting for him strictly because he was Black they proved that they were racist (in my opinion).

It’s all about DNA, phenotypes and ideology. Work ethic, integrity, skills, and experience are not part of the requirements. It also helps to be rotten to the core.

To follow in Obama’s golf shoes all one must be able to do is smile to the press corpse.

Reminds one of a state legislator who votes “present” on all the controversial bills.

Jesus, Palin is Franklin Delano Roosevelt compared to this guy

yeah…this guy and the guy at 1600 Pennsylvania Ave.

According to Wikipedia, Julian Castro

“…was born in San Antonio, Texas, on September 16, 1974,to Maria ‘Rosie’ Castro and Jessie Guzman. He is the identical twin brother of current United States Representative Joaquín Castro. His mother was a Chicana political activist who helped establish the Chicano political party La Raza Unida.”

So, his mother was a very active supporter of “La Raza Unida”, a group that sought to politically empower Mexican-Americans, and that was formed in the 1960s. Coincidentally, “La Raza”, a similarly-motivated group, formed around the same time: http://www.discoverthenetworks.org/printgroupProfile.asp?grpid=153 . This latter group seems fairly clearly to be rather racially biased towards Hispanics (actively promoting the idea of their superiority, it would seem). Also, this group has apparently supported the idea, or has ties to groups that support the idea, of Mexico “reconquering” portions of the United States that are claimed to have formerly formed “Aztlan”, or the area ruled by Aztecs.

Also (according to Wikipedia), Julian Castro:

So, because of “affirmative action”, Julian Castro enjoyed privileges that were denied to non-Hispanic students who had far better academic records than he. I imagine Julian Castro’s experience in this greatly parallels Obama’s own.

Very revealing. He supports “affirmative action” because it gave him an advantage over others who were at least equally qualified and capable. He supports it because it helped him at someone else’s expense.

Let’s remember, too, that the median SAT for students entering Stanford with him was undoubtedly already lowered from past averages by many other “affirmative action” beneficiaries.

As Mayor of Wasilla, Sarah Palin turned a little sleepy town into a bustling town. Under her management, Wasilla expanded via construction and jobs. To claim that she had little responsibility indicates a lack of knowledge about her accomplishments as mayor of Wasilla, Wm. Her responsibility as mayor was akin to that of the city manager of San Antonio and not to that of this do nothing Castro.

“Shallow”. The one word description of the Deemocrat bench.

Well, along with those who make it up.

Noted. But is this any different than what being Vice President of the United States has become within the last five years? Or President for that matter.

I wonder what the prog press would say if the RNC was floating trial balloons about a veep candidate whose father was a wizard in the KKK?

Mama Castro was very active in The Race, and both boys were heavily exposed to that way of thinkinb.

Being mayor in a Texas city manager form of government simply means that as mayor, you get to kiss babies and cut ribbons on new businesses. Oh, and you get the perk of being able to fly around the country, on the taxpayer’s dime, of course, to pimp for your city.

The Castro Brothers of San Antonio are not far, politically, from the Cuban brothers of the same name. Some of the most loony rules have been coming out of San Antonio since Castro was elected mayor. Like requiring children to wear tracking bracelets even when they have left the school building. And the council’s rules for city contracts that would prevent anyone who holds Biblical beliefs on marriage to not qualify.

Rosie Castro, who never married their father (he was already married with 5 kids but moved in with Rosie until the boys were 8) is a hard core Marxist. The twin apples didn’t fall far from that tree.

But we have seen this play before. Henry Cisneros was a brilliant mayor of San Antonio (and well liked, unlike Castro) and was also appoint head of HUD. He left D.C. in disgrace and never recovered politically. I suspect Ted Cruz will have a few words about this Cisneros wanna-be.