Rabbi Eitam and Naama Henkin shot in car point blank as children watched from back seat. 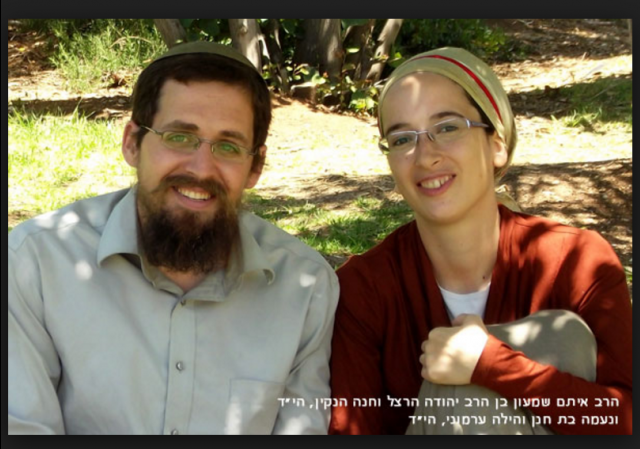 I originally set out to write this post two weeks ago. June 25, to be precise, as part of my ongoing chronicling of the lives and deaths of Israeli victims of Palestinian terror.

But then there were two high profile terror attacks, the stabbing death of 13-year old Hallel Yaffa Ariel as she slept in her bed; and the shooting attack on a family car, killing father-of-ten children Michael “Miki” Mark in front of his wife and some of his children.

Writing about those attacks and others, and the fall out — including how the mother of the murderer of the 13-year old said she was proud of her son — kept me from finishing this post, the first draft of which was June 23.

It’s a sad sign of the times. I can’t keep up with the number and pace of deadly Palestinian attacks, one more horrible than the next.

This post is about victims of Palestinian terror Rabbi Eitam and Naama Henkin, who were shot to death in front of their children on October 1, 2015:

Five Hamas operatives were arrested last month for their part in the murder of Naama and Eitam Henkin in the West Bank. Three of them carried out the attack: Karam Razaq (known by his nickname “Al Matzar”), Samir Kusa (known as “Abu Zuhair”) and Yahya Haj Hamed….

The chilling descriptions they gave during the investigation, revealed here for the first time, touch on the planning of the attack and Eitam Henkin’s attempts, while he was bleeding, to fight off one of the attackers. Henkin managed to take the attacker’s weapon before being murdered at point-blank range.

Then, as the smell of gunpowder faded in the air, they describe the stares of the small children who witnessed their parents being murdered from the back seat of the car. 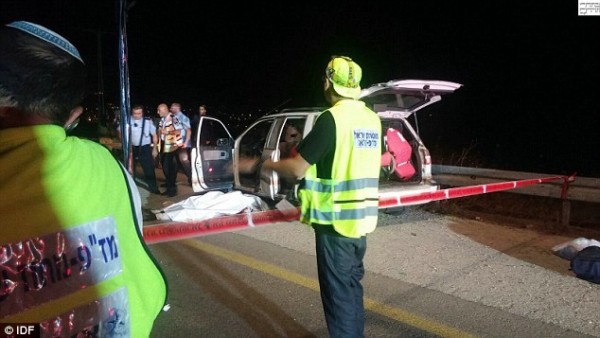 Friends of the Henkins remembered them:

Rabbi Eitam and Naama Henkin met at the tender ages of 16 and 17, and instantly became an indivisible force of love, wisdom,Torah, humility, tzniut, and talent. Rabbi Eitam, who served as a sergeant in the Israel Defense Forces, studied at Nir Yeshiva in Kiriyat Arba. He was a revered teacher at Nishmat and the Talmid Muvhak (closest disciple) of his father, Rav Yehuda Herzl Henkin, Nishmat’s halachic authority. Described by his doctoral advisor, as a ‘child prodigy’, Rabbi Eitam’s first scholarly volume and his first historical book were published in his early 20’s, and over 40 of his writings on Torah and Jewish law have appeared in publications. He was at work on his second and third book, and his doctorate when the young couple’s lives were tragically cut short. Rav Eitam was on course to be one of the great rabbinic authorities of the next generation.

Naama, a talented artist and poet, did national service in Sherut Leumi and studied at Michlelet Emuna. She was an exceptionally talented graphic artist who designed Nishmat’s websites, newsletter, and much more in the last several years. In addition to running her own studio, she created a typography course to enable hareidi men and women to enter the workforce, and was a regular contributor to various forums across the religious spectrum. The couple were live-in dorm parents at Nishmat in Jerusalem before moving to Neriya to raise their four sons, Matan, Nitzan, Neta, and Itamar, who survive them.

Rabbi Eitam and Naama Henkin were truly unique citizens of the Jewish nation, cherished by family, disciples, and all who knew them. They lived lives of idealism and kedusha, deeply committed to family, Torah, Israel and the Jewish people. 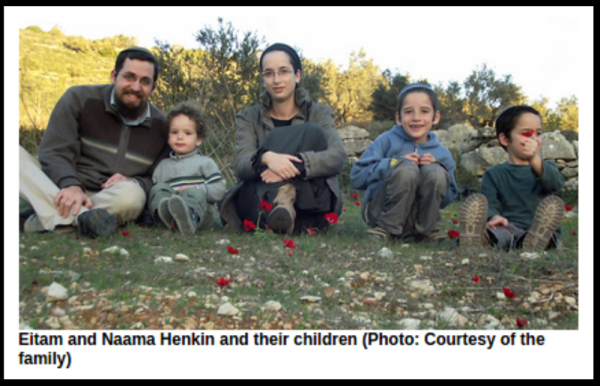 Hamas took both credit and pride:

Hamas welcomed on Monday the Israeli announcement that five members of its organization were arrested for murdering Naama and Eitam Henkin in the West Bank on Thursday — and again praised the terror attack, vowing there would be more.

In a statement issued Monday night after the Shin Bet security service revealed the arrest of a five-member Hamas cell in Nablus, the terror group did not explicitly take responsibility for the attack that left the couple dead in front of their young children, but promised that “this cell is not the first and will not be the last.”

“The occupation’s announcement of the arrest of the Nablus cell is an honorable announcement for our people and their resistance,” Hamas spokesman Sami Abu Zuhri said.

Some Palestinians, both in official channels and on social media celebrated and passed around photos of the dead bodies:

Palestinians have been celebrating the murder of Israelis by distributing the pictures of dead bodies of Israelis and the terror scenes on Twitter and Facebook, according to the official PA daily. The “most significant” picture is that of the dead bodies of the young Israeli couple Naama and Eitam Henkin who were murdered in front of their four children last week. According to the PA daily, the killing of the couple brings “joy” to Palestinians who see the killing as “heroic”.

On June 22, 2016, four of the killers were given life sentences, as The Times of Israel reported, revealing more details of the attack:

The military court in Samaria handed two life sentences and another 30 years to each of the four members of the Hamas cell that carried out the attack in which Eitam and Naama Henkin were murdered in front of their children,” the IDF said in a statement…..

More than a month before the Henkin killings, Kusah and Hajj Hamad shot at an Israeli car near the settlement of Enav. Hajj Hamad fired 20 rounds at the car but only caused light injuries to the driver, Ronen Edri.

Frustrated by their lack of success, the group decided to kidnap Israelis instead, the indictment said.

On the night of the attack, the group identified the Henkins’ car as a suitable target and began following it, the prosecution said. When they caught up with the vehicle, Hajj Hamad fired dozens of rounds at the Henkins, who were driving with their four children, aged 4 months, 4, 7 and 9, in the back. Eitam Henkin was hit and the car came to a halt at the side of the road.

Hajj Hamad and Razek then approached the vehicle with the intention of kidnapping the occupants, but the gravely wounded Eitam tried to fight them off, even attempting to take the gun away from Razek. Alarmed at his show of resistance, Hajja Hamad shot him at short range, killing him, and then turned his gun on Naama. The children were not hit by the gunfire, and the attackers later claimed they had decided not to harm them.

Hamas is promising to try to free the killers in a future hostage exchange deal:

Hamas: The 4 Palestinians sentenced to life for murdering the Henkins will be freed in an honorable prisoner exchange deal.

I’m glad that I finally got to tell the Henkins’ story, before the next act of terror.

1. The subhead needs correction — the male victim’s name was Eitam, not Eitan (which is a completely different name, usually rendered into English as Ethan). The body of the post has it correctly as Eitam.

2. Let’s hope that doesn’t happen. I hope so too, but only in the same sense that I hope to win the lottery; it would be nice, but there’s no basis for any realistic expectation that it’ll be fulfilled. Hamas is correct; sooner or later there will be another disastrous exchange, one more in the series of such exchanges, or else there will be another “goodwill gesture” in order to get negotiations going, and these murderers will come home to heroes’ welcomes and lifetime pensions, and will hit the lecture circuit encouraging the young to emulate them. It’s happened so many times, why wouldn’t it happen again? Especially if there’s a hostage or two whose parents weep on television and get a million signatures on a petition to the “hard hearted” government and demonstrate in front of the prime minister’s office for “abandoning” their children. And so the cycle will continue.

I favor the death penalty, and this is why…among other reasons.

People have a natural right to commit abortion for any cause. Civilized society has a moral obligation to hold them responsible.