Mother of Palestinian who murdered 13-year-old girl: “My son is a hero. He made me proud.”

Mother of Palestinian who murdered 13-year-old girl: “My son is a hero. He made me proud.” 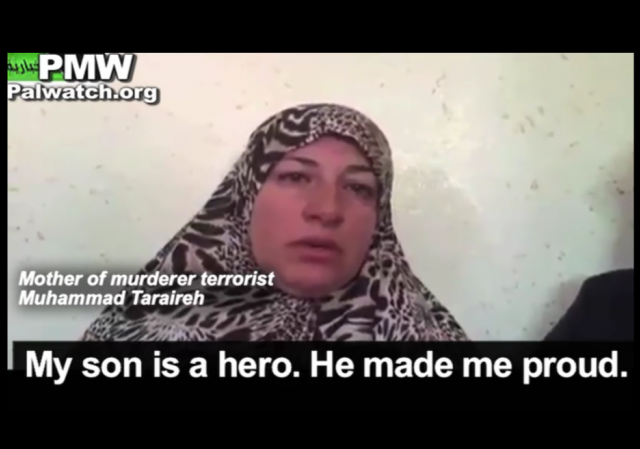 We reported recently on the murder of 13-year old Hallel Yaffa Ariel while she slept in her bed, 13-year old Israeli girl stabbed to death in bed by 17-year old Arab terrorist. 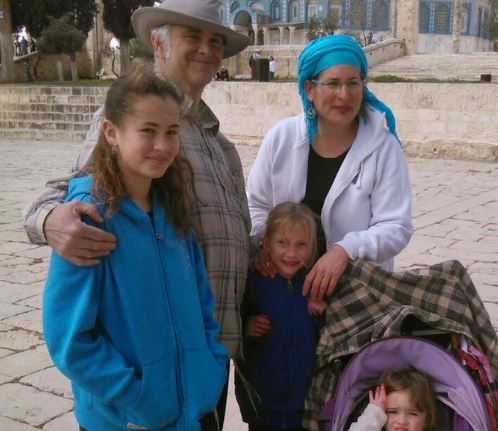 The funeral was heartbreaking. You don’t need a translation as Hallel’s mother spoke at her funeral:

Sobbing, Rena Ariel caressed the blue shroud-covered body of her daughter Hallel Yaffa, 13, before uttering her final parting words to the girl who had been a brilliant student and who loved to dance.

“I am giving you one last hug,” Ariel said on Thursday evening as she eulogized Hallel in front of the hundreds of mourners who filled the small park a short walk from their home in Kiryat Arba near Hebron.

Just the night before, Hallel had performed in Jerusalem with the Harikud dance troop.

In the morning she slept late. According to Kiryat Arba Regional Council, she had planned to spend time with her stepfather Amichai when she awoke helping him in his boutique vineyard.

She was alone in the house and still sleeping when 17-year-old Muhammad Tarayrah sneaked into her bedroom and stabbed her to death.

At the funeral, Ariel called out to Tarayrah’s mother.

“I am standing here with a heart filled with pain and I am turning to you, the Arab mother, the Muslim who sent your son out to stab,” Ariel said as she raised her arm and pointed her finger in the air. raised my daughter with love, but you and the Arab Muslim educators, you taught him to hate. Go, put your house in order,” she said as she shook with anger.

It was one of the few moments in the brief eulogy in which she was not crying as she spoke.

Hallel’s mother spoke about the pain:

Hallel’s young friends stayed at her grave into the night, and sang and wept:

The murderer was shot and killed at the scene, but not before he stabbed one of the responders in the eye (causing him to lose the eye):

The young terrotist had bragged on Facebook about wanting to die a martyer: 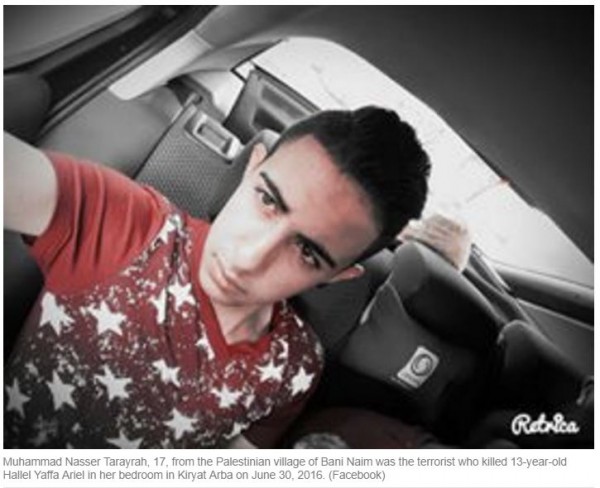 The mothers of terrorists killed in the act, along with other family members, frequently react with joy that their children have died killing or attempting to kill other children or adults:

We have another example of the sickness.

The mother of the terrorist who stabbed Hallel to death in her bed as she slept is proud of her son, and announced it on TV.

PalMedia Watch reports on the broadcast on Hebron television:

Mother of terrorist Muhammad Taraireh: “My son is a hero. He made me proud. My son died as a Martyr defending Jerusalem and the Al-Aqsa [Mosque]. Praise be to Allah, Lord of the Worlds, he [my son] has joined the Martyrs before him, and he is not better than them. Allah willing, all of them will follow this path, all the youth of Palestine. Allah be praised.”

Muhammad Taraireh – 17-year-old Palestinian terrorist, who stabbed and murdered 13-year-old American Israeli Hallel Yaffa Ariel, as she slept in her bed. The terrorist, who infiltrated her home in Kiryat Arba near Hebron on June 30, 2016, also injured one of the Israeli security personnel who arrived at the scene before they shot and killed him.

There can be no peace with those demented people.

A good place to start would be to impose peace on the whole family out to second cousins with fuel air bombs. Take the gloves off.

It’s war. And it’s a war that won’t be over until the enemy is destroyed. What the Palestinians (& all the rest of the Muslims) must decide, is whether to join, or oppose that enemy.

How can you EVER make peace with those who consider cold-blooded child murderers as heroes?

Didn’t Golda Meir foresee this? “Peace will come when the Arabs will love their children more than they hate us.” Not yet, it seems.

And yest every American President, regardless of party or ideology, pushes this on Israel.

So many generations of brain washing. Can they be de-programed or is genocide the only realistic option?

Realistically, those who have been programmed throughout their childhood are like rabid animals and must be put down.

Well, who programmed them? Did not the West force these murderers on the Israelis, and get them to give control of the Arab population to a group of socialist-communist (not Islamic) terrorists, who have spent the last two generations indocrinating them with hate? If not for the Left, they would have accepted the situation. Moslems will give in to superior force.

This evil prospers because it is supported by the left including the Democrats. You would think the left wants to destroy civilized societies.

It certainly is something to be proud of – having your son murder a sleeping child. Not. How is it that anyone can condone or make excuses for this? We are dealing with a culture that teaches their children to hate, but all the Left can do is call Christians (who are called upon to love) haters.

And they are soon to be trading their knives for nuclear weapons. Irrational hate and uranium do not mix well.

We need to turn all these muslim countries into nuclear glass.

I don’t think all is necessary, I would hope that a handful would be enough to convince the rest to change their ways.

If necessary, neutron bombs would be preferable because they would leave the real estate habitable.

Lock and Load!
That’s the only thing that the murderous monsters understand!

Yet Demorats welcome them into our nation! WTF is wrong with these people? Can they not see the hatred in their souls? This is not retrainable with a few good citizen classes. This is in their DNA.The idiots in Sweden are now handing out anti-groping armbands to the muslim monsters! Does anyone in their right mind expect this to stop a cultural trait? These people have been this way for thousands of years and they will not change. Guess who will? Our stupid leaders and they will ask us to change or be called islamophobic.

The left CAN see the hatred. After Brexit, the EU mentioned their plan for a European Army. You get there by destroying the individual cultures (French, Italian, etc.) and replacing them with a universal primitive culture. Then the borders are meaningless. The left loves this violence as it is destroying the existing civilizations. Israel, the 2nd Amendment, and now Brexit are stopping the world rulers. Brexit will not be allowed. Israel and the 2nd Amendment must be destroyed so the rulers can move forward. Look where the attacks are.

Her son was defending Jerusalem? By stabbing to death a little girl, asleep in her bed?

And Jerusalem, the city that muslims claim is so holy to them, is mentioned over 800 times in the Jewish holy texts, but Jerusalem is never mentioned once in the qu’ran.

The ideology that is islam is so twisted and perverse and evil that it almost defies belief.

A religious girl was murdered, and your response was “imagine no religion”? Your religion, atheism, did more dammage to the Jews of Russia than centuries of vicious persecution under the Russian Orthodox Church. And shall we mention the Darwinian secularists of the Third Reich? Compared to your ilk, Islam IS a peaceful religion.

Absence any information to the contrary, like a long association with a terrorist group, I would assume that the mother said this in order to get the money awarded to the families of terrorists. Oterwise she and he family might be destitute since Israel will destroy her home. If she says things like this, money will come to rebuild it.

Time to bomb the dome of the rock