Where is the Palestinian soul searching over the murders of Shelly Dadon, Gil-ad Shaar, Eyal Yifrach and Naftali Fraenkel? 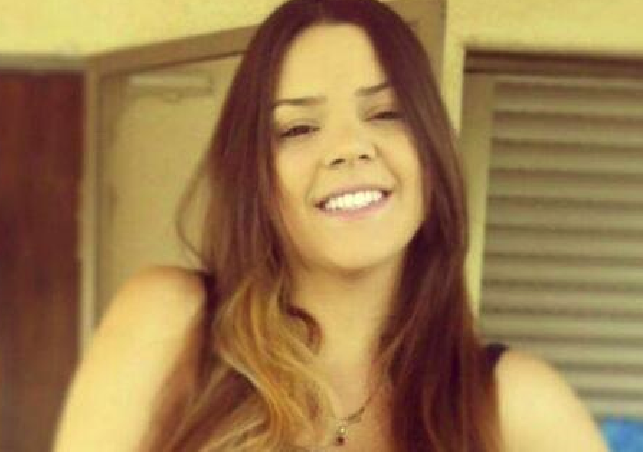 President Shimon Peres says Israel is in a deep crisis of morality following the arrest of six people in the killing of Palestinian teen Muhammed Abu Khdeir last week.

“We did not believe that such a heinous crime could take place among our people. We mustn’t be such a people,” Peres says.

“Today ‘out of Zion shall go forth the shame,’” he says, paraphrasing a famous Bible quote.

“There is no justification for death and no crime is more acceptable than another,” the president adds. “My heart aches with the grieving Abu Khdeir family and with the grieving Shaar, Yifrach and Fraenkel families.”

Dadon, an Israeli Jew, was stabbed to death on May 1 on her way to a job interview in northern Israel. Yesterday the police announced the arrest of an Israeli Arab taxi driver in the crime, which the police believe was driven by “nationalistic” motives, i.e., terrorism.

Yet there is almost no press coverage. As of this writing, a Google News search does not reveal any major non-Israeli newspaper coverage of the arrest in Dadon’s murder. 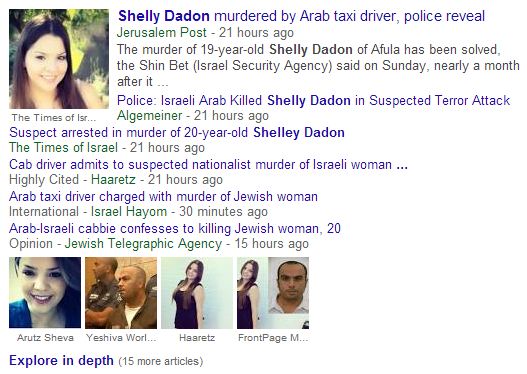 The murder victims are morally equivalent. None of the five were engaged in criminal conduct, and each was murdered out of religious hate. Their families grieve equally.

But just because the murder victims are morally equivalent, does not mean that the societies are equivalent in how they treat their murderers.

When the most brutal Palestinian butchers are released from Israeli prison in swaps, the butchers are greeted as heroes at huge rallies attended by leading politicians, and offered large financial compensation.

Eugene Kontorovich notes the contrast at Commentary, Will the Jewish Terrorists Be Released for Peace?:

Several points should be borne in mind in considering Israel’s treatment of the accursed murders. To be clear, the accused deserve, and are receiving, broad and unconditional condemnation–not because they do not help Israel, but because they are evil.

1) Prisoner swaps. We know Israel will never ask for these Jewish killers to be released as part of a peace deal. This is because Israel recoils with revulsion from their act. They are no one’s heroes….

2) Pensions. Israel will never pay pensions to the killers. The prime minister will not take photos with them, or do anything other than condemn them….

Prime Minister Benjamin Netanyahu made these and other points yesterday in condemning, without reservation, the murder of the Palestinian teenager:

I pledge the perpetrators of this horrific crime,which must be condemned in the most forceful language, will face the full weight of the law

We do not differentiate between the terrorists and we will respond to all of them, wherever they come from, with a firm hand.

While we put these murderers on trial, in the PA there is continuous incitement for the destruction of the State of Israel.

In our society there is no place for such murderers. That's the difference between us and our neighbors who regard murderers as heroes.

That is the reality of the Middle East. It’s a reality Israel haters in the U.S. cannot accept because it exposes the moral bankruptcy of their demonization of Israel:

.@AliAbunimah thinks a society that condemns murderers of children isn't any better than one that celebrates it. And that's why he fails.

In 2013, when Israel released Palestinian murderers under pressure from John Kerry, Netanyahu stated:

The best answer we can give to those same base murderers that sought to defeat us through terrorism is that in the decades that they sat in prison, we built a glorious country and turned it into one of the most prosperous, advanced and strongest countries in the world.

That building must and will continue.

Every society has its murderers. How the societies react is the true test of morality.

Recent events prove that Israel is capable of meeting that test. When Palestinian society shows a similar strength, peace will be possible.

Has there even been one casual but official statement from any one of the Palestinian groups or officials condemning the murder of the 3 Israelis/Americans? Typically some low key, almost sotto voce sentence is uttered and the media runs with it to represent the whole. I haven’t even seen that in this case yet.

But rest assured the media will use the killing of the one Palestinian as broad evidence of Israeli aggression, too.

No. In fact, they threatened more kidnappings.

In the death cult called Islam, the murder of a Jew is no crime. In fact, it is an act to be celebrated. The Western media is fully aware of this, yet is too timid to call it what it is.

I have complete confidence that the Israeli government will punish the kidnappers of the Israeli Arab teen. Also that if the Israeli police reacted with more than needed violence in the arrest of the Florida teen they will be punished severely.

Unlike the Hamas run Gaza strip Israel is not a medieval death cult.

An open condemnation of the murder of Mohammed Abu Khdeir
http://elderofziyon.blogspot.com/2014/07/an-open-condemnation-of-murder-of.html#disqus_thread

Murdering Jews is justified under the doctrines of collective and inherited sin. They are the basis of a degenerate religion which is exploited to create leverage. Unfortunately, this secular religion is all too common in the modern era.

Are you saying you see Judaism as degenerate and secular?

Islam sees Judaism as degenerate and wicked. Could have something to do with Arab Jews, who were populous and powerful before they were all slaughtered by Muhammad’s command, rejecting Muhammad’s claim that he was a prophet.

A poll conducted after the murder of eight teenagers who were studying in a Jerusalem high school in 2008, found that 84% of Palestinians supported the murder [NY Times, March 19, 2008, citing the Palestinian Center for Policy and Survey Research].

… The terrorists honored most highly amongst Palestinian society are those who have killed the greatest number. Abd Al-Baset Udeh, killer of 30 at the Passover Seder massacre, had a soccer tournament for 14-year-olds named for him. His brother was honored with distributing the trophies. Dalal Mughrabi, terrorist bus hijacker (led the most lethal terror attack in Israel’s history in 1978, when she and other terrorists killed 37 civilians, 12 of them children) has had summer camps, schools, graduation ceremonies and sporting events named for her, as well as many TV documentaries honoring her. Palestinian newspapers also frequently glorify Mughrabi, as in the Al-Ayyam article which described Mughrabi as writing “the most glorious page of heroism in the history of the Palestinian struggle. [Aug. 2, 2009].

How is this different than what ETzeL and LeHI did during the Arab violence in ’36 and the mid-’40s, when they bombed Arab markets in retaliation for Arab bombs in Jewish markets? Why is the son of an ETzeL fighter promoting the discredited policy of havlagah, which his father and his colleagues dissented from back then?

The real reason why this is not the correct response is not that the Arab kid was innocent, let alone that his parents were — they very probably were not. The real reason is that death doesn’t deter the Arabs; they welcome it and celebrate it, when it comes in the course of a war such as they are conducting. They see this kid as a shahada, and praise him rather than mourn him. They will never stop killing Jews just because some of them will also be killed.

The correct response to Arab murder is to make them pay a price that they actually mind paying, and that is the permanent loss of more territory. In retaliation for these murders, Israel should annex the whole Gush Etzion. And a new policy should be announced, that for each Jewish victim of terrorism, Israel will permanently annex more land, which will thus not be negotiable in any future talks.

How did they catch these six murderers so quickly? It’s because they weren’t “settler extremists”, they were known soccer hooligans.