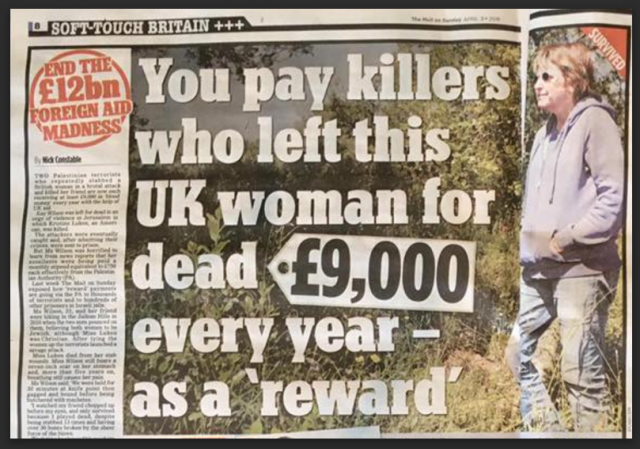 She frequently makes reference to how she was carved up and butchered by Palestinians, but harbors no hatred of Palestinians. Israelly Cool has extensive archives on Kay Wilson.

I never really knew her story, though. But that story is in the news in Britain as part of the British coming to terms with their role in supporting terrorism against Jews in Israel through financial aid to charities and the Palestinian Authority.

Several of our recent posts have addressed this British soul-searching:

Kay Wilson is in the news because The Daily Mail has an extenstive write-up on her story, and how the terrorists who butchered her are being paid by the Palestinian Authority while in prison, a common benefit bestowed on those who murder or maim Jews.

The Daily Mail story is titled You pay two Palestinian terrorists who left this British woman for dead and killed her friend £9,000 each every year – as a ‘REWARD’ :

Two Palestinian terrorists who repeatedly stabbed a British woman in a brutal attack and killed her friend are now each receiving at least £9,000 in ‘blood money’ every year with the help of UK aid.

The attackers were eventually caught and, after admitting their crimes, were sent to prison.

But Ms Wilson was horrified to learn from news reports that her assailants were being paid a monthly stipend equivalent to £750 each effectively from the Palestinian Authority (PA).

Last week The Mail on Sunday exposed how ‘reward’ payments are going via the PA to thousands of terrorists and to hundreds of other prisoners in Israeli jails.

Ms Wilson, 51, and her friend were hiking in the Judean Hills in 2010 when the two men pounced on them, believing both women to be Jewish, although Miss Luken was Christian. After tying the women up the terrorists launched a savage attack.

Miss Luken died from her stab wounds. Miss Wilson still bears a seven-inch scar on her stomach and, more than five years on, breathing still causes her pain.

Ms Wilson said: ‘We were held for 30 minutes at knife point then gagged and bound before being butchered with machetes.

‘I watched my friend chopped up before my eyes, and only survived because I played dead, despite being stabbed 13 times and having over 30 bones broken by the sheer force of the blows.

‘Each time he plunged his machete into me I could hear my bones crunch, and also my flesh ripping from the serrated blade.

Three is a petition that has garnered almost 200,000 signatures (as of this writing) calling for a cut in foreign aid.

Wilson was interviewed two weeks after the attack, and the interview was run in The Jerusalem Post on January 27, 2011, in ‘What a waste, I’m 46 years old and I’m being murdered’

As Wilson recounts the attack minute by minute, her voice stays stoic and calm. She wants the world to know what happened to her in the forest; she wants to share what has happened so she can begin the process of healing.

The two women got out of the car with Wilson’s dog, Peanut, and walked a bit on the Israel Trail. They had wandered off the path to an overlook when suddenly two Arab men appeared and asked in Hebrew if they had any water.

The men gave her an uneasy feeling, so Wilson suggested they head back to the path. She walked in front of Luken and opened the blade of her pen knife.

“Suddenly, she screams, and as I turn around one of them pounces on me, the other one has already pounced on her,” Wilson recounted. “This is the moment I was so terrified.

This was the overwhelming moment of fear for me, this first part.”

She struggled with her attacker, who had pulled out a very long, serrated knife, and managing to stab him in the thigh with her pen knife.

It was this stab that later allowed forensics experts to collect DNA at the site and positively identify the attacker, the Shin Bet said….

Meanwhile, the attackers were on their cellphones, saying over and over in Arabic, “Where are you?!” coordinating with at least one other member of the terrorist cell who was in the getaway vehicle….

As one of the men used pieces of Luken’s jacket to gag the women, it dawned on Wilson that they were going to be kidnapped.

“I’m standing there and I have the most terrible thought: that if we’re going to go sit with Gilad Schalit [in captivity], it’s better to be dead. It’s the most horrendous decision,” she said.

Then the women were separated and Wilson was forced to get on her knees with her head bowed. Suddenly the fear of murder became real.

“I see he gets out his knife and he pushes my head forward and I’m just waiting to be beheaded. I think psychologically at that point I lost all sense of fear. I completely blacked out, all I could think about was that he’d make a clean cut that he wouldn’t be messy.

“I’m waiting for ‘Allahu akbar!’ but it doesn’t come.

Instead, I hear ‘Oh no, oh God,’ and I can hear them starting to stab [Kristine] a few times. The next thing I know…he’s just stabbing me.

“It was so terrifying that there wasn’t a capacity for fear.

I’m just thinking, ‘I’m being murdered, what a waste, I’m 46 years old and I’m actually being murdered.’ I say ‘Shema Yisrael’ and the next thing I know I can hear Kristine really, really crying. And I’m thinking, ‘Stop it Kristine, stop it, you’ll have a chance if you just stop it.’” The first five or six stabs were into her muscles, but when one punctured her diaphragm, Wilson thought it was the end….

Finally the two men left, though they returned a moment later when Luken let out a cry, stabbing her several more times until she stopped making noise altogether. One of the men came over to Wilson, flipped her on her back, and drove his knife into her sternum, where her Star of David had been. Wilson managed not to cry out, and continuing to play dead.

As I mentioned near the start, when I see Kay Wilson on social media, it’s not to spread hate, it’s to spread healing. With the release of The Daily Mail story, she made sure to point out that she was saved by an Arab Israeli surgeon:

Wilson recently told her story outside the United Nations, as hideous anti-Israel propaganda and resolutions were debated and passed by the ill-named U.N. Human Rights Council:

Wilson is the kind of Brit that beat the Axis in WWII. What a woman!

Israel should intercept the payments for the up-keep of these cowards.

The British electorate lost its collective mind a long time ago, stubbornly voting in leaders are warped as Obama, though not as dumb.

Lets see how ‘tolerant’ Europe is when they have to start paying the US for their defense.

The Brits need to get out more. This kind of thing has been going on for a while.

I dare say but there is a hint of stockholm syndrome with this woman. She doesn’t hate Palestinians (fair comment) but she comes across as someone who understands why she was attacked (ie. because of settlements and the oh so oppressive occupation).

Secondly, Britain doesn’t really care about this. The only thing that makes this interesting is it was a British citizen attacked. The fact she was attacked because the Palestinians thought she had committed the heinous crime of being a Jew is completely ignored.

Finally, the Foreign Office is part of the problem here. The FO is itself a rabidly anti-semitic organisation and actively feeds in to Palestinian hatred against the Jews.

Where did this new outrage come from. Anti Semitism is rampant in GB and the rest of Europe. Nothing new here…except their faux dismay.

Did she have a permit to carry that Pen Knife? Is that a micro aggression? /sarcasm off/

Glad that she is exposing these savages and is recovering. God Bless her and the friend that she lost.

But, of course, it was OK to pay for killing, and torturing Israelis and other Jews all of these years. This is why I have no sympathy for the victims in Belium, a country that indirectly supplies government funding for ISraeli Code Pinks. Nor, unfortunately, is thE united States innocent here, not to mention the so-called “Zionist Union”, Israel’s current main opposition party, one of whose top members considers the IDF evil.

Sorry, should have proofread.