Erdogan Reaches Out to Obama About Extraditing Gulen

Erdogan Reaches Out to Obama About Extraditing Gulen

The Turkish government blames the failed coup on Gulen, a one time Erdogan ally. 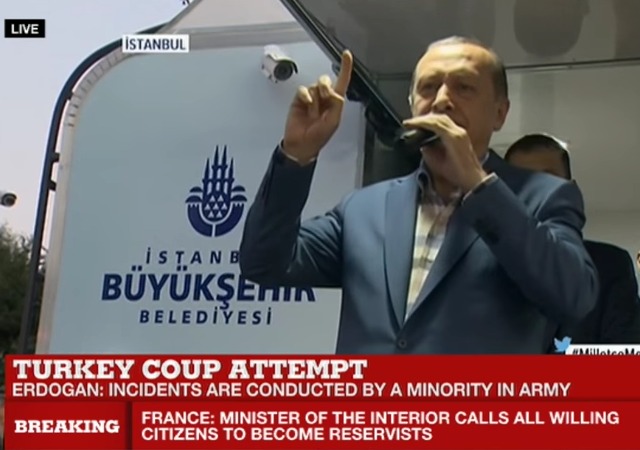 Turkish President Recep Tayyip Erdoğan has reached out to President Barack Obama about extraditing Fethullah Gülen, who he blames for the failed coup on Friday. The White House said:

“The president made clear to President Erdogan that the United States doesn’t support terrorists and doesn’t support individuals who conspired to overthrow a democratically elected government,” according to White House spokesman Josh Earnest.

He said Obama “reiterated once again the strong commitment of the United States to the democratically elected civilian government of Turkey” and commended the Turkish people’s effort in “defending the government and repelling the coup” last week.

The State Department received documents from Turkey, but did not say if they “amounted to an official extradition request.” It is not easy to extradite someone:

Lawyers at the State and Justice departments would review it to determine if the alleged offense is a crime in both countries and whether it falls within the scope of the countries’ extradition treaty. The request would then go before a judge, who would rule on whether probable cause existed that a crime was committed and that the accused person did it.

If the request survived those tests and is found lawful, it would still need to get the approval of U.S. Secretary of State John Kerry, who can consider non-legal factors, such as humanitarian arguments.

The U.S.-Turkey extradition treaty went into force in 1981 and covers any offense punishable in both countries by more than a year in prison. It does not cover offenses “of a political character,” although it does cover “any offense committed or attempted against a head of state or a head of government,” according to the treaty.

Gülen resides in Pennsylvania due to a self-imposed exile in 1999 to escape possible charges against the then-Turkish government. He remained an ally of Erdoğan until 2013 when the courts launched a corruption investigation against the then-prime minister. Erdoğan quickly squashed the investigation, but blamed his old ally “for orchestrating the scandal.”

In the same phone call, Obama urged Erdoğan to show restraint and respect human rights during the crackdown. Since Friday, the government has purged almost 53,000 people.

The president insists Gülen and his followers did the coup even though he has not presented any evidence to show his conclusions:

“We have more than enough evidence, more than you could ask for, on Gulen,” Justice Minister Bekir Bozdag told reporters outside parliament. “There is no need to prove the coup attempt, all evidence shows that the coup attempt was organized on his will and orders.

Prime Minister Binali Yıldırım said the government will do everything they can to eliminate the Gülen movement from Turkey:

“I’m sorry but this parallel terrorist organisation will no longer be an effective pawn for any country,” Mr Yildirim said, according to Reuters news agency.

“We will dig them up by their roots so that no clandestine terrorist organisation will have the nerve to betray our blessed people again.”

An astounding lack of self awareness. Obama claim he does not support violently overthrowing democratically elected governments. He has been trying to get Assad for years.

It’s just the “We have evidence” rants followed by not actually sending any of it, plus the “Filing paperwork” on him that may not actually be a request for extradition has my feelers up.

I think Gulen is an advocate of sharia and Islamic supremacy, so he’s tainted goods, but I wouldn’t send him to Erdogan. Unfortunately I think Obama is so gung-ho on helping Islam conquer the world that he’s very likely to do just that.

It is a fun quandary for Obama in an election year.

Didn’t Hillary have something to do with overthrowing Gaddafi?

No neither one of them had anything to do with that, they would have had to have gotten the OK from congress to do something of that magnitude. I mean put American troops and pilots under foreign control to help over throw a government with out congressional approval??? no, never ever….. I see you guys moved the sarcasm button again damn it!

Time to watch Erdogan really closely aft this coup. If he starts sucking up to Obama and Merkel to reestablosh relations, then business as usual.

If Erdogan starts sucking up to Islamists, then WW3 has just started. Obama and Merkel will not do anything, it will be up to Clinton/Trump to clean the mess.

The American military base where the Nukes are kept still doesn’t have power.

If Clinton can’t bribe her way around something, she can’t ‘clean it up.’

The most dangerous despots over the centuries have shown they cannot be bribed: wealth does not mean as much to them as power.

A foreign leader reaches to President Trump to extradite Clinton and Obama.

I’m not as versed on this subject, yet, but I suspect Obama will bend over and take it like a …..