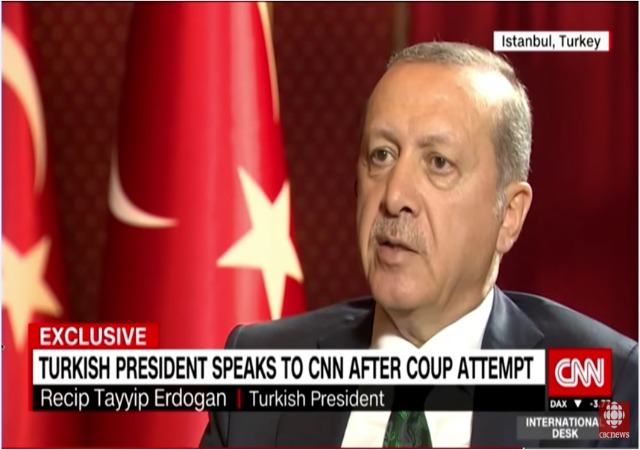 “Our ministry is carrying out extensive efforts aimed at public personnel in central and rural districts who have connections to FETÖ. As of today, 15,200 public officials have been suspended and investigations were launched into them,” the statement released from the ministry’s Twitter account read.

Here are the rest of the numbers:

The Higher Education Board (YÖK) also demanded that deans at the private and state universities resign:

52,958 people purged due to alleged cooperation in the failed coup or alleged tied to the Fethullahist Terrorist Organization (FETÖ), run by Fethullah Gülen, an enemy of Erdoğan. The president insists Gülen and his followers did the coup even though he has not presented any evidence to show his conclusions:

“We have more than enough evidence, more than you could ask for, on Gulen,” Justice Minister Bekir Bozdag told reporters outside parliament. “There is no need to prove the coup attempt, all evidence shows that the coup attempt was organized on his will and orders.

Prime Minister Binali Yıldırım said the government will do everything they can to eliminate the Gülen movement from Turkey:

“I’m sorry but this parallel terrorist organisation will no longer be an effective pawn for any country,” Mr Yildirim said, according to Reuters news agency.

“We will dig them up by their roots so that no clandestine terrorist organisation will have the nerve to betray our blessed people again.”

The government will not allow the prisoners to meet with lawyers or family.

“A lot of people have been arrested and arrested very quickly,” Kerry told journalists. “The level of vigilance and scrutiny is going to be very significant in the days ahead.”

He noted that NATO, which Turkey has been a member of since 1952, “has a requirement with respect to democracy, and NATO will indeed measure very carefully what is happening.”

“We will certainly support bringing the perpetrators of the coup to justice but we also caution against a reach that goes beyond that and stress the importance of the democratic rule being upheld,” Kerry said.

Turkish Foreign Minister Mevlüt Çavuşoğlu has reassured Kerry and the West that they will “respect the democratic process.”

However, NATO would have a difficult time removing Turkey since the U.S. uses an air base from there to conduct airstrikes against the Islamic State in Syria. Turkey also holds “fifty US B-61 hydrogen bombs, placed there in the Cold War for the hour’s flight time to the Soviet Union.” NATO said, though, NATO Secretary General Jens Stoltenberg will keep an eye on Turkey:

Mr Stoltenberg said: “Being part of a unique community of values, it is essential for Turkey, like all other allies, to ensure full respect for democracy and its institutions, the constitutional order, the rule of law and fundamental freedoms.”

Looks like Turkey is well on it’s way to becoming an Islamic State. Perhaps it will merge with ISIS to reform the Ottoman Empire.

I don’t think that is far from the truth. And wouldn’t a nice supply of Hydrogen bombs be a bonus to a budding Islamic empire? I truly hope that those bombs are being loaded onto transport aircraft right now before Turkey decides to reclaim Incirlik. Because we know that our troops would be told to stand down.

Just who told who to stand down? Aren’t you getting tired of that particular canard? Even a partisan Republican controlled Congressional Committee admitted that neither Clinton nor Obama told anyone to stand down. I am not going to re-litigate the facts of Benghazi. There are plenty of places to get non-partisan examinations of what transpired.

Even the guy who wrote a book that was supposed to blow the lid off of it had to admit that he was there to protect a CIA annex and was needed there.

If you are that upset regarding the 4 people killed and a gutted consult, you must be beside yourself over the Iraq War. My god, somebody, I don’t know who made some really, really bad decisions in that one.

“Just who told who to stand down?”

Possibly Clinton from her private email server. Then the emails got deleted, hence the months long gap around Benghazi.

Not like the State Department or Administration as a whole was exactly forthcoming around that entire episode.

I wonder if Obama is watching this, thinking, ‘Damn Constitution!’.

“Turkey also holds “fifty US B-61 hydrogen bombs, placed there in the Cold War for the hour’s flight time to the Soviet Union.” ”

No. These are held by the US military at our Air Base in Incirlik. Thank God for that. It would behoove the US to quietly move them out of Turkey, but I am sure that sensible heads at the Pentagon are planning such contingencies.

The noises NATO is making about democratic rule are hollow. Turkey has suffered multiple successful coups over the last sixty years without losing NATO membership during the Cold War. The problem arises as to whether Turkey and the rest of NATO are increasingly at cross purposes. Is a realignment in the works? Would Russia make a more useful ally than Turkey?

It’s my understanding that all nuclear weapons were removed from Turkey as a deal to remove nuclear missiles from Cuba during the Cuban missile crisis.

Are you saying that that deal only addressed land based missiles and not the bombs held under US Air Force control?

No not true. Only IRBM Jupiter missiles were removed. Warheads speaking about here are bombs carried by jets.

That’s what the Telegraph article says, to which the Legal Insurrection post refers:

My own intelligence sources tell me turkey is delicious with cranberries and gravy.

Yeah Kerry is full of crap once again. Does that guy know he talks like a fool? The Turkish military has been in power thru coup a few times after ascending to NATO membership and never once did NATO kick it out. Turkey invaded Cyprus, at that time a Greek island in the 1970’s, a fellow NATO member, and Turkey paid no price of being kicked out.

Beria would be proud

Obama is SO JEALOUS! I’ll bet if he had a list of NRA members, gun owners and conservatives, he’d have staged a “coup” like this one and purged the country of “opposition” like his mentor Hitler did. With all the closed down blast furnaces, cremation would no longer be a problem.

While there has been positive progress (e.g. abortion rites, Planned Parenthood, female chauvinist revolution, excessive immigration, refugee crises, Pro-Choice indoctrination) to replace and displace Americans in America, it is not an easy feat to overcome 200 years of American religious/moral, evolutionary (i.e. Posterity), and structural rule.

Have to respectfully disagree with that. Considering half the nation is either dumb, dumbed-down or part of a progressive cult, our borders open to hoardes of whomever, Obama has seeded the nation with Syrian ‘refugees,’ our media is completely corrupt, Obama is in high office, the likes of Ginsberg and Sotomayor sit on the Supreme Court and that the Republican leadership – the opposition party to all this – is populated by the likes of Ryan and McConnell, it will take shockingly little to overcome America’s 200 year history.

Our only hope is Trump purging the leadership of parasites like Ryan, McConnell and Prebus. Now that he is the head of the Republican Party, perhaps he just might begin the process.

Trump cannot purge the party of these people, only their constituents can do that.

That may be the single most pathetic declaration of blind faith in the face of facts I’ve ever seen.

T-rump is not your reformer. In fact, he’s BFF with the same people you name. Just as I told you Mr. Establishment would be.

How do you say “Night of the Long Knives” in Turkish?