Colion Noir: No, Obama, guns aren’t easier to get than books

Colion Noir: No, Obama, guns aren’t easier to get than books 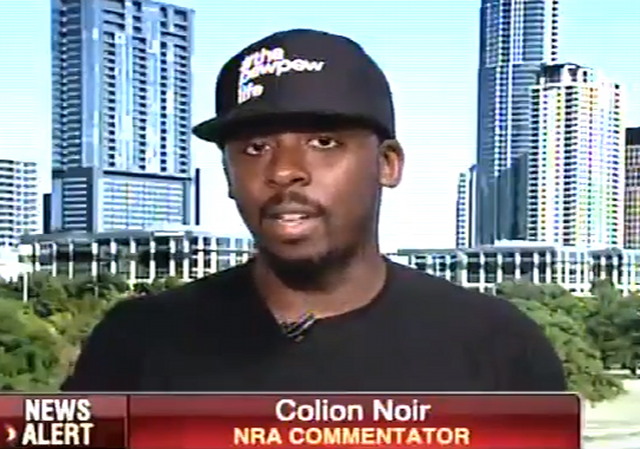 At the memorial service for the police officers slain in Dallas, President Obama made a stunning statement on the availability of guns and the ease with which they can be obtained.

President Obama repeated a claim Tuesday he has previously made that some teenagers can more easily purchase handguns than computers or books during his speech at a memorial service for five Dallas police officers murdered last week.

Obama blamed much of the tension between minorities and police on a number of different political issues, including access to guns.

“So much of the tensions between police departments and minority communities that they serve is because we ask the police to do too much and we ask too little of ourselves,” the president said. “As a society, we choose to underinvest in decent schools. We allow poverty to fester so that entire neighborhoods offer no prospect for gainful employment. We refuse to fund drug treatment and mental health programs.”

“We flood communities with so many guns that is easier for a teenager to buy a Glock than get his hands on a computer or even a book,” he added.

NRA commentator Colion Noir recently appeared on the FOX Business Network and refuted Obama’s claim as absolutely not true. Noir also points out that more education is needed on the issue of guns.

It is impossible to have a reasonable discussion with most people who are for gun control, Noir suggests, because they don’t know what they’re talking about. He says they hear Obama say things like this and believe him. Watch:

Meanwhile, the Democratic Party is doubling down. Roll Call reports:

Sen. Chris Murphy, D-Conn., who led a filibuster for stricter gun laws after the Orlando nightclub massacre, will fulfill a promise to push the issue on the campaign trail.

On Thursday, Murphy launched the “Fund to End Gun Violence,” which will back House and Senate candidates. Endorsements are expected in coming weeks and months, according to a news release.

“This will be a long fight, but it’s one we will win,” Murphy said in a statement. “We will not break the gun lobby’s decades-long hold on Congress overnight. I have faith that American democracy will not allow for its elected officials to be so out of step.”

That last part is especially ironic, isn’t it?

“On Thursday, Murphy launched the “Fund to End Gun Violence,” which will back House and Senate candidates.” Just another scam to take money so they can stay on the campaign gravy train.

I’m planning the four-hour drive to Dallas so I can buy a Glock for the price of a book, and with equal ease.

I may stop by Half-Price Books and Records there to pick up a book or two, as well.

The same guy selling guns to those “children” probably sells stolen laptops too. Books are at the library in case El Presidente doesn’t know.

What Obama meant to say – It is easier for inner city youth to get a Glock than find a copy of The Audacity of Hope.

And the FOX person, as usual, reflexively refers to Sharpton as “reverend”. And Noir doesn’t even remark on it, because it’s so common. He is not reverend, he is despicable, and should always be referred to that way. The Despicable Al Sharpton.

Even if “gun control” could seriously reduce crime, it would still be wrong. Look, there is one “simple” measure we could take that would cut violent crime by at least half — lock up every black male between the ages of 15 and 50 in America. Nobody can seriously deny that it would work. But we don’t want to do that, do we? Because that would be a crime greater than any of the ones it would prevent. So enough with the pretense that “if it saves just one life” it’s worth doing. A certain level of crime is a price we pay for liberty, and it’s well worth it.

Old Saying ( don’t know where it came from / paraphrased ) :

“It is better to be silent, and have people wonder if you are an idiot, than to open your mouth and prove it.”

Obama and Sharpton need to “shut-up”.

Two possibilities for this verbiage :

Or it could be both …

There is this one attributed to Abraham Lincoln: “Better to remain silent and be thought a fool than to speak out and remove all doubt.”

Europe has had very bad experiences with gun control. Why should we repeat their failed experiments?

Maybe Obama should try to buy a book.

Yeah. Something like the “Idiot’s Guide to the U.S. Constitution.”

Which is probably good for everyone around. I picked up a Highpoint awhile back, dirt cheap, and it inevitably jams within the first magazine. I have run maybe 5k rounds through a Glock 17 without any real problems. It just keeps working. Last round in a non-Glock magazine will, on rare occasion, not feed right. But that is because they are non-Glock, and have been used hard. At this point, if they were Glock mags, I would replace the springs. It is almost like day and night between these brands.

Actually it is more difficult for some to get books than it is to get guns. The reason for this is that so many have absolutely no interest in books, reading, or learning anything useful at all that they do not know where the library is, they do not know how to check out a book, they cannot read a book, and, therefore, they have an enormous wall created by themselves to keep them from ever trying to use the library which makes it so difficult.
>
Guns, on the other hand, are stolen or otherwise obtained (straw man purchases,and so forth) and simply handed to many these perps.
>
So in a perverse way, Obama is correct when you factor in how those who want guns to be cool and to kill others and who eschew any kind of learning. Unfortunately, none of these arguments hold water for those of us living in reality where we know that living by the gun leads to a short violent death while living through education leads to a far more enriching and long term life. It’s all a matter of perspective.

I received my library card within minutes. I showed my driver’s license.

The receipt of my concealed carry license took almost 80 days (120 days is allocated by the state of Illinois). One has the option to send in finger prints to expedite.

There’s some truth in that statement. The street gangs rent out guns. Most inner city kids don’t even know where the library is.

I had a Scout whose family moved to the burbs. He was interested in taking up hunting, and asked me what kind of gun to get. I told him to get a .22 rifle, every boy’s first gun.

And outlawing guns will do nothing to remedy this. It only takes a trivial number of guns to arm the criminal element. In the UK and Australia, when guns were essentially outlawed, gun crime rose dramatically.