The Kremlin will stop at nothing to silence all critics around the world. 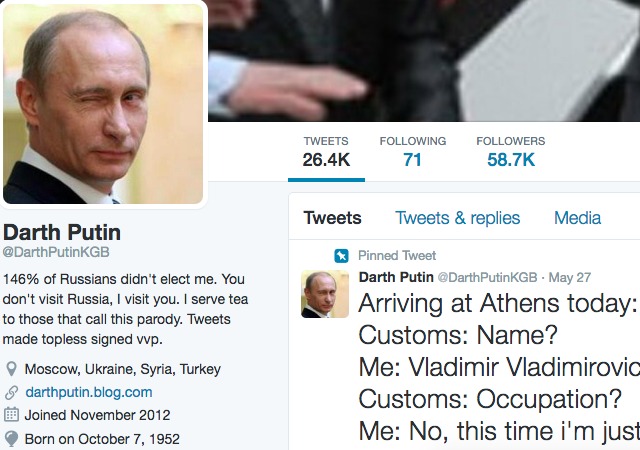 Twitter has lost one of the funniest accounts in a long time due to possible pressure from the thin-skinned officials in Russia.

The social media platform suspended five accounts that parodied Russian officials, including the popular @DarthPutinKGB, who regularly mocked Russian President Vladimir Putin. They have reinstated a few, but the Putin one remains suspended.

Good news: The famous @DarthPutinKGB has returned, but showed much displeasure: 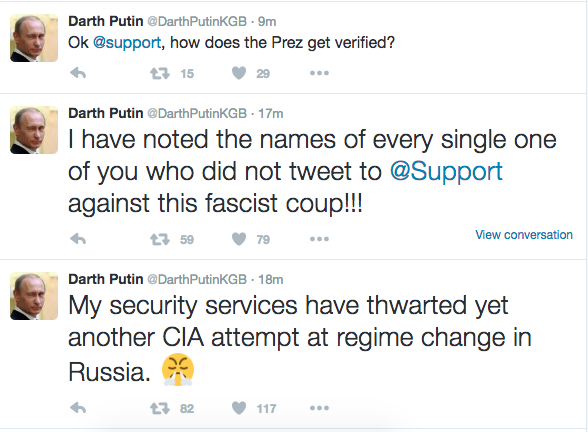 Unfortunately, this is only one of many cases over the past four years that have shown the Kremlin will unleash its power across the world to silence its critics.

Twitter did not release a statement, but told Radio Free Europe/Radio Liberty (RFE/RL) to look at Twitter’s rules for all parody accounts.

The company requires the bios of the parody accounts to say they are fake and not affiliated with the subject. The person running the account cannot make the Twitter handle the same name of the subject.

The suspended accounts all made it clear they were parody accounts, but Twitter would not confirm or deny they received pressure from the Kremlin or if bots kept reporting the accounts for alleged abuse.

Weirdly enough, on the same day, Twitter joined forces with Facebook, Google, and Microsoft to fight “hate speech” in Europe with a new Code of Conduct with the European Commission’s Committee for Justice, Consumers, and Gender Equality. There is no mention of the United States, but Facebook has already received enough criticism for suppressing conservative news.

Twitter has a history with Mother Russia. They recently cut off the CIA from Dataminr, “the only company Twitter allows to have full access to its full stream of hundreds of millions of daily tweets and sell the resulting intelligence to customers.” CEO Jack Dorsey decided to terminate the contract because he did not enjoy helping the agency.

However, Dorsey does not mind if Russia Today (RT), the Kremlin-funded propaganda machine, receives information from Dataminr. The agents at the Russia’s Federal Security Service, aka the KGB, have access to the information RT receives from the service. From The Wall Street Journal:

Twitter defended its decision by saying it doesn’t allow its data to be used for “surveillance purposes.” This is nonsense: Dataminr performs no surveillance, because there is nothing private about the tweets it mines for data. In any case, Dataminr uses the public information from Twitter to identify events, not to collect information about individual people.

Twitter’s argument raised eyebrows even among those usually sympathetic to arguments for privacy over security. “If Dataminr simply sorts public knowledge, then denying the intelligence community that information makes little sense,” explained Wired magazine. “If, on the other hand, Dataminr provides a level of insight that should only be accessible with a warrant, giving that same information to an unregulated hedge fund seems problematic.”

Twitter is a private company that can do what it wants, but why choose Russia over the United States? Russia’s invasion of Ukraine and annexation of Crimea has woken up the Cold War (don’t kid yourselves…it never truly ended, just took a nap) and raised tensions through the roof.

Oh, but the sensitivities of those in charge of Russia has shown its ugly face before. Shaun Walker at The Guardian tracked down Kremlin paid trolls at the Internet Research Agency, who work all day to flood the internet with praises towards Russian President Vladimir Putin while condemning the West. One source told Walker the bosses forced them to author “ordinary posts,” but then “throw in a political post about how the Kiev government is fascist.”

A few months later, Adrian Chen wrote about the agency for The New York Times. He met with a woman from the English-only speaking department, but only with her brother, who had Nazi tattoos all over his body, for protection. They had him sit in a specific spot and in a specific way at the spot where they met. Chen and the woman enjoyed a polite conversation and went their separate ways.

Chen then discovered the Internet Research Agency changed to the Federal News Agency (FAN), which published an article that associate him with Nazis. The article, “What Does a New York Times Journalist Have in Common With a Nazi From St. Petersburg?” connected him to the woman’s brother:

The story detailed a mysterious meeting in St. Petersburg between a New York Times journalist — me — and a neo-Nazi. Its lead image was a photo of a skinhead giving an enthusiastic Nazi salute. But it was not just any skinhead. It was the skinhead whom Katarina Aistova brought to our meeting and introduced to me as her brother. As I learned from reading the article, Aistova’s “brother” was in fact a notorious neo-Nazi named Alexei Maximov.

The article explained that Maximov, who goes by the nickname Fly, is a member of Totenkopf, a prominent skinhead group in St. Petersburg. He reportedly served nine years in prison for stabbing a man to death. Just a month before I met him, Maximov again made headlines when, during an investigation into beatings of immigrants around St. Petersburg, the police found weaponry and Nazi paraphernalia in his apartment.

The article claimed Chen met with the neo-Nazis to create a “provocation against Russia.” Pro-Kremlin blogs caught onto the article and made its way around the internet. Next thing Chen knew, other stories claimed he worked for the CIA and NSA.

In May 2014, The Guardian addressed the fact that pro-Russian trolls flooded the comments sections of the publication’s Ukraine stories:

One complaint came to the readers’ editor’s office on 6 March. “In the past weeks [I] have become incredibly frustrated and disillusioned by your inability to effectively police the waves of Nashibot trolls who’ve been relentlessly posting pro-Putin propaganda in the comments on Ukraine v Russia coverage.

“… the quantity of pro-Kremlin trolling on this topic … which has been documented extensively since 2012 as a real and insidious threat to online communities of idea and debate, has rendered commenting on these articles all but meaningless, and a worthless exercise in futility and frustration for anyone not already being mind-controlled by the Kremlin.”

On 23 April the writer complained again: “One need only pick a Ukraine article at random, pick any point in the comments at random, and they will find themselves in a sea of incredibly aggressive and hostile users (the most obvious have accounts created since February 2014 … but there also exist those who registered with the Guardian before the high point of the crisis) who post the most biased, inciteful [sic] pro-Kremlin, anti-western propaganda that seems as if it’s taken from a template, so repetitive are the statements. Furthermore, these comments are consistently capturing inordinate numbers of ‘recommends’, sometimes on the order of 10 to 12 times what pro-Ukrainian comments receive.”

The Guardian could not say exactly who started the campaign, but do “believe there is an orchestrated campaign.”

“In Soviet Russia, the government takes hand outs from you.”

I wonder if he changed to the twilight fringe when Emperor Obama began construction of the Death Star on his border.

possibly related as to the legality of it all. course they will pick and choose how to handle this….

Russia does what Russia does. The real concern here, imho, is the behavior of the American companies.

I’m surprised Barack didn’t think of this. Or Valerie, whatever.