George Orwell called. He wants his story back. 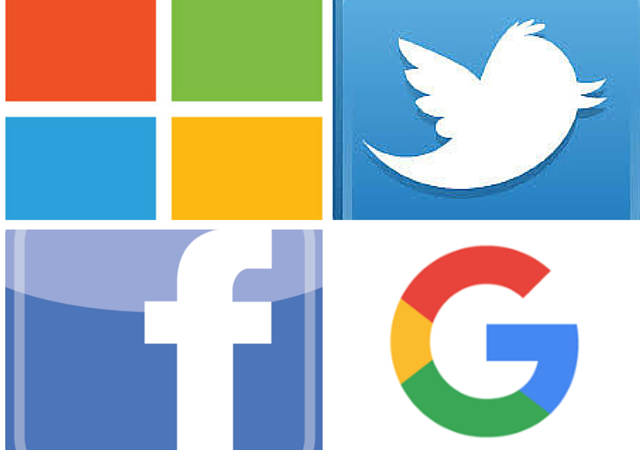 Gee. What could possibly go wrong?

The Internet is a place for free speech, not hate speech, IT companies commit
to review&remove online #HateSpeech pic.twitter.com/Tq7MfYqHNw

Before we get too deep into the weeds with the details of this new, brave, Code of Conduct, it’s worth remembering that all participating entities are public companies entitled to set user platform rules as they see fit, to either their benefit or detriment contingent upon the response of the free market. That said, they also control an inordinate amount of news consumption and dissemination so this is pretty damn concerning. Mind you, the following applies to “hate speech” in Europe, no mention of the U.S.

The IT Companies support the European Commission and EU Member States in the effort to respond to the challenge of ensuring that online platforms do not offer opportunities for illegal online hate speech to spread virally. They share, together with other platforms and social media companies, a collective responsibility and pride in promoting and facilitating freedom of expression throughout the online world. However, the Commission and the IT Companies recognise that the spread of illegal hate speech online not only negatively affects the groups or individuals that it targets, it also negatively impacts those who speak out for freedom, tolerance and non-discrimination in our open societies and has a chilling effect on the democratic discourse on online platforms.

In order to prevent the spread of illegal hate speech, it is essential to ensure that relevant national laws transposing the Council Framework Decision on combating racism and xenophobia are fully enforced by Member States in the online as well as the in the offline environment. While the effective application of provisions criminalising hate speech is dependent on a robust system of enforcement of criminal law sanctions against the individual perpetrators of hate speech, this work must be complemented with actions geared at ensuring that illegal hate speech online is expeditiously reviewed by online intermediaries and social media platforms, upon receipt of a valid notification, in an appropriate time-frame. To be considered valid in this respect, a notification should not be insufficiently precise or inadequately substantiated.

The Code of Conduct is as nannyish, bureaucratic, and ineffective as you’d imagine. Staff have to be trained, member states have to be involved, no one can wipe their own butt without getting permission to do so, the usual stuff.

The two biggest changes include a 24-hour requirement to check “flagged” content and here’s where it gets really fun — create counter-narratives if necessary. “Recognising the value of independent counter speech against hateful rhetoric and prejudice, aim to continue their work in identifying and promoting independent counter-narratives, new ideas and initiatives and supporting educational programs that encourage critical thinking,” the Code of Conduct mandates.

So not only will Twitter and Google and all the others be stamping out “hate speech” (though that’s not clearly defined), but they’ll be working as propaganda agents. That Twitter has cozied up with Russia is of no concern though, apparently. I’m sure they’ll be able to put that allegiance aside and work in the best interest of non-Russian interests because a piece of paper says so.

Facebook was recently busted in the U.S. for allegedly intentionally manipulating their trending news segment to omit right-leaning news stories and sources.

But I’m sure this new Code of Conduct, along with Europe’s current migrant crisis, terrorism troubles, and cultural collapse isn’t a recipe for disaster. Not in the least… 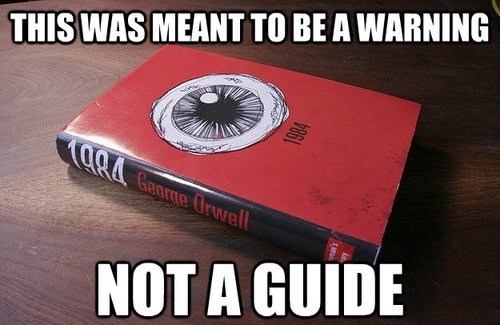 I read the book and it doesn’t end well….. well … OK… the Party keeps on going and Big Brother is as big as ever. They win… we lose…. and AirStrip One finally goes full Sharia (THAT wasn’t in the book but in the sequel).

My first reaction also. Turns out that the biggest threat to our freedoms and rights isn’t Big Government but Big Giga Corporations.

Mostly because they are monopolies of the means of communication and information that has been inextricably woven into our daily experience and our very lives. Our economy would stutter if any of these giants decided it needed to happen.

This needs to be addressed and not by giving them more power to decide what we can say or what we believe in.

Skynet was never a threat. It was the software programmers that are bleeding heart liberals that has become the problem.

Personal visits to remove us to a Re-Education camp? Or maybe by then they’ll just glue a VR headset on us and tie us to a chair an make us watch propaganda and force feed it into our brains.

And then there is RollerBall!

Big Biz can be a threat, but it’s not the biggest threat. Megacorporations can shut off your communications but they can’t toss you in the dungeon.

Nobody has come after me with a gun. All you have to do is say, “Nope”.

Try that with Big Brother.

One of the “hot” areas of “big data analytics” at the moment is “sentiment analytics” which is an offshoot of text analysis. These systems can analyze text and determine/predict not only what is being written about but the “sentiment” of the writing. Is it happy or sad? Positive or negative? Love or hate?

Yes, all is apparently proceeding according to plan.

Historic point of interest: Eric Arthur Blair (“George Orwell”) caught a bullet through the neck during the Spanish unpleasantness of 1936-39, but that didn’t stop him. What finally did was tuberculosis, finishing him off at age 46, not long after he finished the manuscript of 1984.

Tuberculosis, the disease Obama is currently importing; it is carried by a hefty percentage of “refugees”, mainly The Faithful from Somalia.

It will only get worse.

In 1900, one in four deaths in US related to TB. Still out there in the world. Got flamed recently for suggesting TB on rise in US… was told only from legal world wide travels…. ah… no….the Obama-Volk.

If only we had an President willing to stand up to Political Correctness, willing to say what was on their mind, without kowtowing to the rigid demands of the liberal media and brainwashed academicians enforcing a speech code of what is acceptably “Presidential”. What a breath of fresh air that would be for our country and the world!

Instead, what this election cycle has given us is two main candidates with a proven record of suppressing any speech that is critical of them, often using the most despicable tactics available. One in particular has promised MORE repressive reforms to keep his critics in fear.

If only we had a presidential candidate willing to stand up for the Constitution.
Seriously, where am I?

And speaking of the Instruction Manual, the portrait of Big Brother on the cover of the 1959 Signet edition looks like … Bernie the Red. (The 1954 cover, not so much.)

“The Internet is a place for free speech, not hate speech…”

This is a stunning statement that could only emerge from a Big Brother “thinker.”

From Cafe Hayek at this link

… from page 181 of an excerpt from George Jacob Holyoake’s April 1872 Reasoner essay, “Free Thought – Its Conditions, Agreements, and Secular Results,” as it is reprinted in the 2015 reader, Individualism, edited by George H. Smith and Marilyn Moore:

“Without Fair Criticism, thought could never be tested or improved. Thought is often foolish, often mischievous, and sometimes wicked; but he alone who submits it to free criticism gives guarantee to society that he means well, though he may be in error, since Criticism must bring down upon him exposure and punishment if he be in fault or foolish. He who perverts Free-thinking into loose thinking – he degrades free speech into a scream of passion, or makes it an echo of folly, is a traitor to both, and Criticism is the Court where the treason is tried and punished. Criticism is the corrector of erroneous thought or abuse of freedom.”
========
Progressives are actually regressive. They not only want the Stasi back, they want to return to the 19th century or earlier. They are inching back for a rerun of the French Revolution. ISIS is preparing to participate.

And most important question here is :

Who decides what is ‘hate’ speech and what is ‘free’ speech ?

And the second and third, of course :

Who will pay for this ‘hate speech’ policing ?
Who will get paid ?

The European Court of Human Rights has stated that…freedom of expression “is [also] applicable to [words] that offend, shock or disturb.” This was taken from ComputerWorld.

I always thought that main intent of a post was to offend, shock, or disturb.

I guess it won’t be long now that we will not be able to use that false, murdering, rapping prophet’s name in the same sentence as the words “is evil”.

It’s about time we put the truth down the memory hole.

This is not Big Brother because these are private corporations. They can choose to stop you from saying “hi” if they want, but they have to answer to their users.

Big corporations in bed with Big Government -the worst of both worlds. Maybe technically not “Big Brother,” but that’s a distinction without a difference as long as the Nanny State calls the shots for private corps.

Good. I know the invisible hand to be a fickle devil.

For the past 800 years Europe has always been so obliging to oppression.

When you have Gov. & Corps. working together to restrict speech, We had better listen up & watch what they are trying to do to us.

Yes, “Illegal hate speech.” It has already been made a crime across the EU ever say anything true about Islam, IF you are not a Muslim and a supporter of Islam. Preachers of violent jihad can scream the truth about Islam at the top of their lungs, how it demands the systematic murder of non-Muslims “until all religion is for Allah alone” (Koran verse 8.39). This speech allowed because it does not disparage Muslims, but only disparages and threatens everyone else. Advocating mass murder is fine, as long as you are advocating mass murder of non-Muslims.

One key is that the EU hate speech laws offer no protection for truth. It isn’t just that they reject the American understanding that free speech is necessary for arriving at truth. They are not thinking about truth at all, but simply want to be able to enforce the government line.

In the U.S. our limited exceptions to free speech in the cases of libel and slander have explicit allowances for the truth, which is a complete defense. EU hate speech laws are all about suppressing inconvenient truth.

Point out that orthodox Islam is a very explicit conspiracy to commit mass murder, fully prosecutable under existing laws against conspiracy to commit murder, and European police departments WILL knock on your door and haul you away to jail. It has already happened in England in response to more modest truths about Islam. This is quite obviously, ALL ABOUT ISLAM.