Remind the world of the basic truths of Jewish heritage 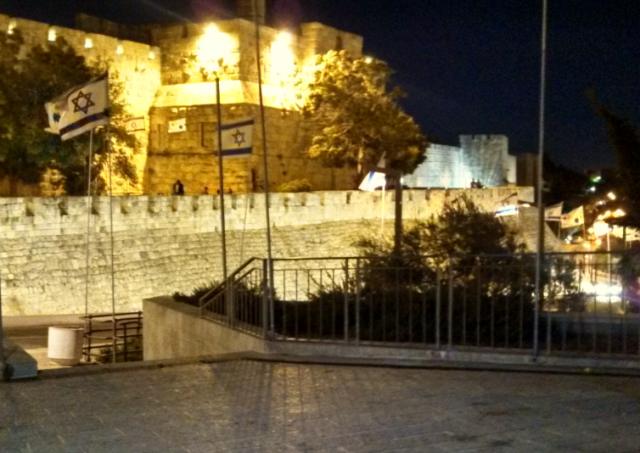 The newest addition to the Jewish calendar, it’s held on the 28th day of the Hebrew month of Iyar—six weeks after the Passover seder and one week before the eve of the holiday of Shavuot.

In Israel the holiday is marked with pilgrimages to Jerusalem with thousands of Israelis heading to the city for the annual Flag Parade.

But in many Jewish communities Yom Yerushalayim typically passes without a lot of fanfare.

Many Jews haven’t even heard of it.

Partly, this is because of the holiday’s young age. Outside of Israel, there aren’t many customs and traditions associated with it (at my synagogue, we’ll be reciting Hallel—psalms of praise—and sharing a festive meal).

But MyJewishLearning notes another reason it isn’t observed extensively:

Yom Yerushalayim can make some politically liberal Jews outside of Israel uncomfortable, due to the continuing conflicts over the future of the city. Even some Jews who believe that the city should remain undivided and under Israel’s control choose not to emphasize Yom Yerushalayim as a day of joy because of the deeply emotional, violent, and controversial state of affairs surrounding the Arab portions of Jerusalem”.

Because Jerusalem Day deserves to be celebrated with pride and joy—openly and without reservation.

In 1949 Jordan ethnically cleansed every last Jew from the ancient Jewish Quarter of the Old City.

Then, in a shameless violation of the April 1949 truce agreement, for nearly two decades it denied Jews the right to worship at the Western Wall—(a ban that also prevented Arab Israelis from visiting their mosques on the Haram al-Sharif).

The restrictions against the Jews were so severe that tourists who wanted to cross over from west Jerusalem into the Jordanian-controlled part of the city had to produce a baptismal certificate. 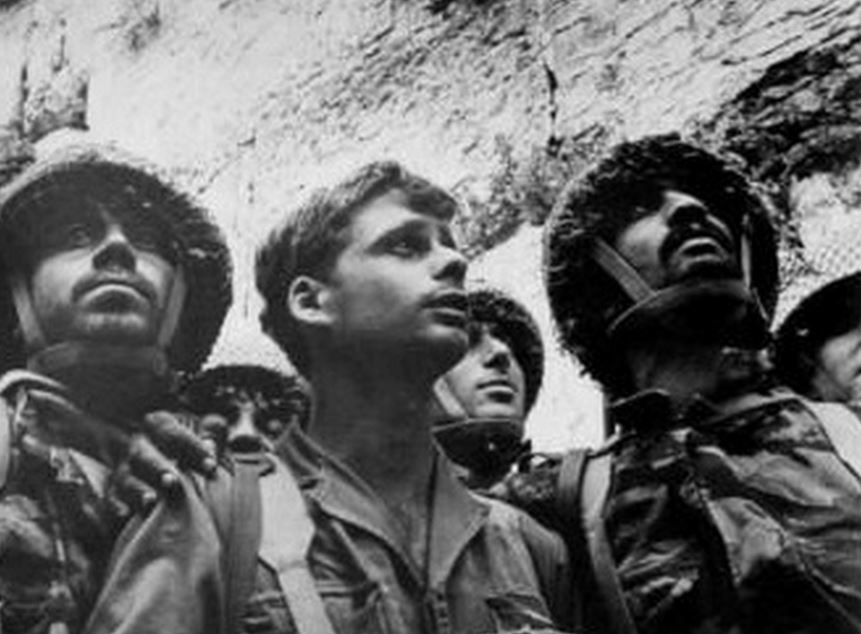 REASON #2: The whole city of Jerusalem is reclaimed and reunited under Israeli sovereignty.

On June 7, 1967, the third day of the Six Day War, the 55th Paratroopers Brigade received the order to take the Old City. Recounted by Sara Yoheved Rigler in aish.com:

The paratroopers entered through Lions’ Gate. Much to their surprise, other than the occasional sniper fire, there was no resistance. The Jordanian forces had evacuated the night before. The Israeli troops, like a magnet, headed directly to the Temple Mount. The words of [Lt. Gen. Mordechai] Motta Gur, heard on radio in bunkers and bomb shelters and bases throughout Israel, would echo throughout modern Jewish history as the rallying cry of a vanquished-now-victorious people: ‘Har Habayit B’yadenu, the Temple Mount is in our hands!”.

As Marshall J. Breger of the Columbus School of Law, Catholic University of America and co-author of a seminal study on the city describes:

Twenty-seven synagogues and some thirty schools were damaged or destroyed. The Porath Yosef, Hurva, and Tiferet Israel synagogues were destroyed. The famous Yohanan ben Zakkai Synagogue was devastated from within and survived only as a shell. The synagogue founded by the great biblical scholar Nachmanides in 1267 was also devastated…the hallowed Jewish cemetery on the Mount of Olives suffered a similar fate…Graves ripped open, and bones scattered; thousands of tombstones smashed or removed by the Jordanian army to build fortifications, footpaths, army camps, and latrines…The Jewish Quarter was so thoroughly destroyed, according to news reporters, that it had the look of Stalingrad or Berlin in World War II”.

Israel’s been restoring these Jewish heritage sites since 1967.

REASON #4: Jewish faithful have the legal right to pray on the Temple Mount.

It’s something that a number of rabbinic authorities see as the Jewish people’s “spiritual awakening, and reconnecting—not only to their most holy site, but to their own destiny”.

REASON #5: Reaffirming a Jewish attachment to the holy city and to the land.

For nearly a century, and contrary to the writings of their own religious tradition, Arab Muslims have belittled, denied and denigrated Jerusalem’s Jewish past.

As noted by scholar Yitzhak Reiter, who has extensively researched the contemporary Muslim “denial of the Jewish Temple and Western Wall”:

Islamic nationalists, be they clerics, academics or politicians, seek to refute claims regarding Jerusalem’s centrality to Judaism; they deny the Jewish Temple’s existence in Jerusalem and assert that the Western Wall is not an authentic remnant of the Temple’s external supporting wall, but rather al-Aqsa compound’s western wall—the place identified today with al-Buraq, the amazing steed upon which Muhammad was borne to Jerusalem and which the Prophet is said to have tethered to the wall in question…the Arab-Muslim meta-narrative tries to deny any serious or long-lasting connection of Jews and Judaism to Jerusalem and the land.”

Yom Yerushalayim is an occasion to remind the world of the basic truths of Jewish heritage, and the historical sovereign legitimacy of the Jewish State.

Miriam F. Elman is an associate professor of political science at the Maxwell School of Citizenship & Public Affairs, Syracuse University. She is the co-editor of Jerusalem: Conflict and Cooperation in a Contested City, published last year by Syracuse University Press.

(The real God. Not Allah, not Obama.)

Reason 6: Jerusalem is now open to people of all faiths.

Reason 7: The roots of the Temple Of Herod have been excavated, greatly expanding the “sacred ground” available to Jews beyond the Western Wall.

Thank you, Ragspierre! There are even more reasons, to be sure. My next post will cover restrictions to the Jewish right to pray on the Temple Mount, and ongoing efforts to ensure that a legal right granted by the courts can be exercised in practice.

And yet, despite what you penned, the current official posture is that Muslims have some claim to it and should be trusted to be fair to all while being in control of it. My question regarding the stupidity of annexing territory without exercising sovereignty over it is this: how many ‘palestinians’ have been arrested and prosecuted by the Muslim authorities for crimes against Israelis?

Israel has been playing nice guy for so long that the fool in the Vatican now thinks that there is a sovereign called Palestine. While I support Israel, I won’t be surprised or seriously troubled in my heart if the government falls. The Tanakh prohibited Hebrews from selling or giving away the land covenanted to their forefathers. One of the stories in the Tanakh describes a king who coveted a vineyard, killed its owner, and took it. Adonai was not pleased then, and I doubt He is any less displeased now with the current State of Israel.

Pray that His Grace extends to the current population of the State of Israel because they sure need it.

“Be favorable, Lord… May our eyes behold Your return in mercy to Zion. Blessed are You, oh Lord, who restores Your divine presence to Zion.”
R’tzay
https://www.youtube.com/watch?v=GHQGpIJiRaU

And one big reason not to celebrate it: as platypus pointed out above, contrary to Motta Gur’s famous pronouncement, the Temple Mount is not in our hands. It was, for a glorious few moments, and we gave it away. No matter what any law says, Israel is not sovereign on the mount; the waqf does whatever it likes, and successive Israeli governments sit on their hands. Nor is the rest of Jerusalem truly in our hands, when successive governments impose, at their whim, unofficial but very real barriers to Jews building or buying houses in many areas. When the Israeli police force refuses to allow today’s parade to pass through the Lion’s Gate, for fear of offending the Arabs. When the same police have for decades openly defied the law by prevent Jews from praying on the Mount. When at every election there is a real danger of a new government giving the eastern part of the city away, and going on his past record one can’t even trust the current PM not to do so. The 28th of Iyyar could have been a true holiday, but the victory seems more illusory every year.

OK, Milhouse, fair enough. Stay tuned for my next post on restrictions on the non-Muslim right to pray on the Temple Mount and the travails of advocate for religious equality, Yehuda Glick.

It’s not only Jerusalem that should be celebrated. The liberation of Judea and Samaria and the return of the Jews to their rightful homes in the Jewish heartland must be celebrated too. In fact all the yishuvim in these areas hold celebrations of their own as well.