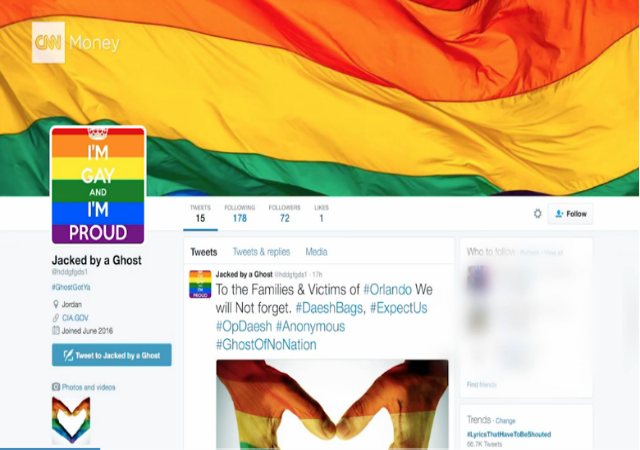 WauchulaGhost started the campaign a month ago with only pornography, but added gay pride after Omar Mateen killed 49 people at Pulse, a gay club in Orlando, FL. He said:

“There was a few of us… that discovered a vulnerability,” he told CNNMoney. “We thought, ‘Hey let’s go start taking their accounts … and humiliating them.'”

“You had all those innocent lives lost,” he told CNNMoney. “I just felt there’s something I could do against the Islamic State to defend those people.”

WauchulaGhost changes the “ISIS flags with rainbows and gay couples embracing” on the Twitter profile. He has changed the Twitter name to “Jacked by a Ghost.” He will then go through the member’s followers list and DM them:

“I’ll talk to them for a few minutes, either in Arabic or English, and I’ll just have a normal conversation,” he told CNNMoney. “Then I’ll let them know it’s the ghost and not who they thought it was.”

(He added that he doesn’t speak Arabic but has “contacts all over the world who translate for me.”)

He once belonged to the hacker group called Ghost Security Group, “made up of counterintelligence officials and computer specialists.” Some members used to belong to Anonymous, but this Ghost’s leader said this group “is small and more focused.”

But WauchulaGhost left Ghost in November. He identifies as a member of Anonymous, but works alone.

ISIS has developed a huge presence on social media, especially Twitter, where they spread their hate and recruit Westerners.

The militants sentence homosexuals to death in their caliphate. They have posted pictures of them throwing gays off rooftops.

ISIS used Mateen’s image in their latest recruitment ad, praising his actions for bringing destruction to America and murdering those who “sin” against Allah. Mateen called 911 and pledged allegiance to ISIS right before he open fired inside the club.

The terrorist group took credit for the attack after they heard Mateen mentioned them.

They released another statement on Monday:

“One of the Caliphate’s soldiers in America carried out a security invasion where he was able to enter a crusader gathering at a nightclub for homosexuals in Orlando, Florida … where he killed and injured more than a hundred of them before he was killed,” the group said in its broadcast.

We can’t have this LGBT crowd gettin any more confused than the ones supporting Trump now, can we?

I don’t think the practice is limited to Afghanistan either.
I really want to make a joke about Target’s bathroom policy here but I’ll refrain.

The Taliban are using child sex slaves to mount crippling insider attacks on police in southern Afghanistan, exploiting the pervasive practice of “bacha bazi” — paedophilic boy play — to infiltrate security ranks, multiple officials and survivors of such assaults told AFP.
————–
The ancient custom is prevalent across Afghanistan, but nowhere does it seem as entrenched as in the province of Uruzgan, where “bacha bereesh” — or boys without beards — widely become objects of lustful attraction for powerful police commanders.

Colion Noir rants on obama and the gun grabbers over their response to the attack on Pulse.

Hackers should NOT be honored in any way shape or form. They have done horrendous harm to many lives just as ISIS has. Stealing personal financial information and government intel are only some of the ways they create havoc.

Hackers are usually disturbed loners, just like ISIS attackers, who prey on innocent people they alone deem guilty (and w/o due process).

Hacking should never be given any credibility. See the following book for background.

“We Are Anonymous: Inside the World of LulzSec, Anonymous, and the Global Cyber Insurgency by Parmy Olson, a contributor to Forbes.

I am not disagreeing. But I would like to consider another perspective:

1) Mark Twain stated that principles are for the well fed.
2) The battle against ISIS is more of a street fight. In that arena, self imposed rules will get you killed.

If we can’t win honorably, should we make sure that we at least win? Are we fighting for only ourselves or for the future that we are setting up for our children and grandchildren?

I would suggest that when you become like what you are fighting, you haven’t “won” anything.

“Mark Twain stated that principles are for the well fed.”

It has been said that Mark Twain was a Mason. As a Christian I don’t count him as a reliable source for moral values, ethics and “principles.” Twain was an excellent story teller and satirist, to be sure.

I am not well fed but I do try to feed well my principles.

Some people use their skills and intelligence for unlawful or evil purposes. Some of these “bad” people call themselves “hackers” and maybe they are so.
But there is also, worldwide, a big and very active community of intelligent, skilled cyber-security experts that call themselves “hackers” too. Every year there are conventions, social gatherings and conferences. Many, or most, of these experts are active contributors to open source projects and non-profit technology groups.
There’s a lot of “good” coming from “hackers” that you use everyday, probably without even knowing it.
For example, more than 50% of internet servers use Apache, a free HTTP Server developed and maintained by the Apache Foundation. Guess who are the people behind this project?

OK. I am not talking about “White Hat hackers” who go after “Black Hat” hackers and resolve Federal crimes against individuals and organizations.

What is a Valium ?

Never mind, my “hacker” friend helped me look up “Valium” in google.

Apparently you did take one, ’cause this comment seems to backtrack your disparaging comments like
“Hackers are usually disturbed loners”
or
“Hacking should never be given any credibility”

Go easy on it, though. Don’t get hooked.

I personally would be very grateful if someone “counter-hacked” the human filth who write trojan horse programs and get rich off the hijacking of people’s computers.

If they just published where I could find them, I would cheerfully beat them to death with a cheater pipe.

Yessir, I’m sure The Faithful will be quaking in their sandals when they realize they’re dealing with twelve-year-olds.

The correct term is “crackers“, not “hackers”. A hacker is an expert in some field of knowledge, who “delights in having an intimate understanding of [its] internal workings”, and “enjoys the intellectual challenge of creatively overcoming or circumventing limitations”.

As historically correct as you are, the popular definition of one who secretly/illegally accesses information systems for unauthorized purposes has been included in leading dictionaries for years. Language evolves. Being historically correct is not necessarily the same as being linguistically correct. But I’m sure you know that.

The word we are searching for is: schadenfreude 🙂