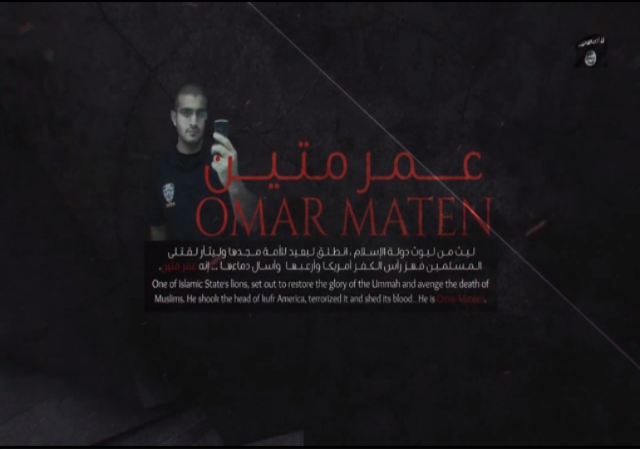 The Islamic State (ISIS/ISIL) has released a video called “Orlando Attack” that celebrates Omar Mateen and the murder of 49 people at Pulse in Orlando, FL.

Mateen called 911 and pledged allegiance to the terrorist group before he opened fire at the popular gay club. ISIS praised the terrorist:

“One of Islamic State’s lions, set out to restore the glory of the Ummah and avenge the death of Muslims. He shook the head of kufr America, terrorized it and shed its blood. He is Omar Mateen.”

As it shows scenes from the area, ISIS promises they are here stay and expanding in the Middle East. The group also promised more attacks on America, “the evil, crusade, infidel among the worst of the unbelievers,” if the military doesn’t stop airstrikes against them in Iraq and Syria.

The video also tells the viewer that the terrorist group “has alerted the Muslims to march forth and strike the Kuffar in the lands of Kufr.”

Over a photo of Pulse, ISIS encourages people to “kill them wherever you find them.” They also remind terrorists they can “kill any unbeliever who he is able to kill among the Kuffar Muharibin (combatant Kuffar).” 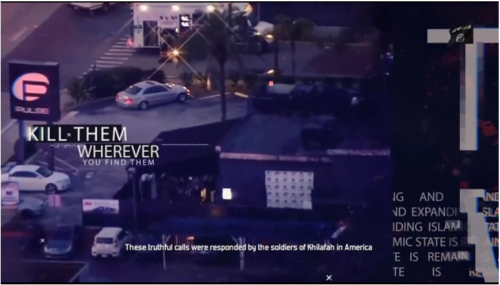 The video says that “New York, Washington, Orlando, and other cities will not feel safety and comfort” if the war against ISIS continues. 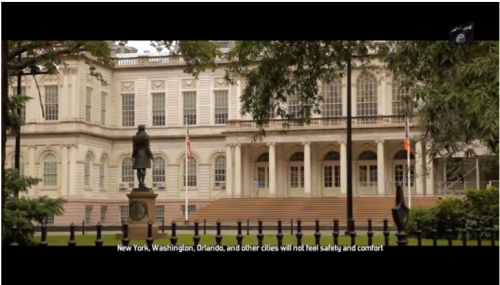 ISIS claimed responsibility for the attack through their Amaq Agency.

They released another statement on Monday:

“One of the Caliphate’s soldiers in America carried out a security invasion where he was able to enter a crusader gathering at a nightclub for homosexuals in Orlando, Florida … where he killed and injured more than a hundred of them before he was killed,” the group said in its broadcast.

However, law enforcement has confirmed that Mateen visited online gay chats and published profiles on gay dating apps. They do not know if he was gay or looking for targets. No one has confirmed sexual relations with him.

His father Seddique said their Islam religion had nothing to do with the terrorist attack. He claimed his son “got angry” when he saw two men kissing Miami. Mateen expressed disgust with the action, especially since he had his son with him.

High school classmate Samuel King never saw homophobic behavior from Mateen. He insisted Mateen knew he was gay and would even drink at the bar at Ruby Tuesday even though he knew the bartenders were lesbians. King showed Mateen pictures of him as a drag queen and brought him to one show.

Story today about how a terrorist wannabe was caught in N.M. with plans for the local gas pipeline on her.

You know it’s pretty damn bad when even the Mexican officials are expressing their shock at how non-existent U.S. border security is.

As I said many weeks ago, we can plan on various kinds of attacks here because they are so cheap and so effective.

And we haven’t seen anything like what we could see. Nothing really sophisticated or involving much planning or an attempt to use our own “stuff” against us.

I won’t go into details here for obvious reasons, but I’ve hauled thousands of gallons of Phosgene over interstates and into densely populated areas.

Nobody who drives much interstate can NOT be impressed by the loneliness and vulnerability of electrical transmission lines.

I’ve hauled super-heavy transformers which take years to build, but which can be made to fail by a simple loss of cooling oil, and for which there are no replacements.

We can, of course, resist and successfully fight these threats.

Why aren’t they also celebrating Obama? – At least publicly.

They will probably wait until he is out of office so that they can give him a great big “Thank you!”.

Americans do not have to wait for the government to defend them.

There are still a few lessons we can draw from the 9/11 attacks, because
1. The death toll in the Twin Towers was far lower than it might have been. The security planners did exactly as they should.

2. The attacks on the Towers did not take out our financial markets, as planned. Again, in part because of the bombing ten years before, the markets had been dispersed across many computers, and despite the death and carnage, the transactions were all recovered, and the market reopened within days. We lost about a million jobs, but we did not have chaos.

3. The fourth plane did not reach its target, believed to be either the White House or the Capitol Building, because our own citizens took it down, at a cost of their own lives.

Since that time, there have been some attacks in this country, some of which were put to a rapid and definitive end, such as the attack on the Draw Mohammed conference.

There is not one strategy that will defeat these murderers, but we are fully up to the task, if we decide to take it on. Since our Federal government is in no position to act as quickly as we’d like, it’s up to the individual in some cases. We need to recognize this reality, and prepare for it.

Never have seen such a vile group.

The main issue is Islam, it is in compatible with everything it disagrees with. When will the government wake up and realize that mosque are nothing more than terrorist cells spreading this vile “religion.” The so-called “moderate Muslims” who stand by and watch as others do what their “holy” book says completely agree with the actions. They are not afraid to help or stop what is happening because they to agree with those like ISIS. The Left supports Islam because it can be used to subjugate people easily and kill who ever resists. The Left can only fully implement its plans by first disarming the citizens, killing all those who oppose them, then finally “re-educating” whom ever is left. Both Islam and the Left have one thing in common To destroy the very foundation of this nation. Everyday Americans should not stand by and let this happen! We should fight! #AmericanDomesticCrusade

Dear ISIS:
While your cheers for our homegrown extremist are well intended, we have no doubts, please know that Mister Mateen was a Homophobe with right wing leanings.

In conclusion, please know that your promise to bring more death to America has been noted and we will respond with our usual stern words and Vast Testicular Concavities.