The risks are too great for many athletes and their family. 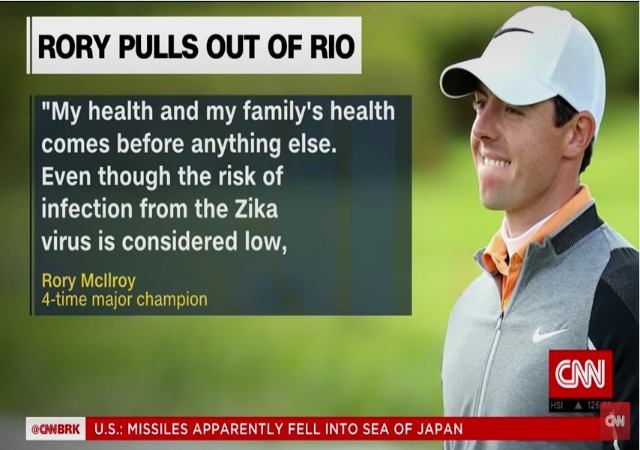 World #4 golfer Rory McIlroy has announced he will not play at the Rio Olympics due to the Zika outbreak.

He released this statement:

“After much thought and deliberation, I have decided to withdraw my name from consideration for this summer’s Olympic Games in Rio de Janeiro.

“After speaking with those closest to me, I’ve come to realise that my health and my family’s health comes before anything else.

“Even though the risk of infection from the Zika virus is considered low, it is a risk nonetheless and a risk I am unwilling to take.

“I trust the Irish people will understand my decision. The unwavering support I receive every time I compete in a golf tournament at home or abroad means the world to me.

“I will continue to endeavour to make my fans and fans of golf proud with my play on the course and my actions off it.”

Scientists have connected Zika to birth defects, including microcephaly and Guillain-Barré syndrome.

Numerous athletes have withdrawn from the Olympics because of Zika while some have expressed doubt they will play, but have not made up their mind yet.

McIlroy wants to start a family in a few years with his fiance Erica Stoll.

Australian golfer Marc Leishman pulled out because of Zika. His wife “nearly died last year from toxic shock syndrome” so he does not want to cause more health problems for his family. Adam Scott and Vijay Singh have also chosen not to attend Rio, but mainly for scheduling conflicts.

World No. 6 (and fellow Oklahoma State University graduate!) Rickie Fowler does not know yet if he will participate in the Olympics:

“I’d love to have the opportunity to go down there, but we don’t know for sure yet,” Fowler said.

U.S. cyclist Tejay van Garderen decided not to attend because his wife is pregnant and he does not want to risk transmitting Zika to her and their unborn child.

In February, the U.S. Olympic Committee (USOC) told athletes to skip the games if they have any concerns over the virus. Doctors and experts have linked Zika to microcephaly, which occurs when the brain does not form properly and results in a small head. This leads to serious mental disabilities and feeding problems.

U.S. goalkeeper Hope Solo has said she might not attend the Olympics because of the virus. Stadiums in Manaus, Salvador, Basília, Belo Horizonte, and Sáo Paulo will host the soccer games instead of ones in Rio. These places, though, “have higher rates than Rio of mosquito-borne viruses like Zika, dengue, chikungunya and malaria.” The Brazilian government has advised women to delay pregnancy for up to two years due to the possible connection to microcephaly, a rare birth defect that occurs when the brain does not form properly during pregnancy:

“I would never take the risk of having an unhealthy child,” she said. “I don’t know when that day will come for Jerramy [Stevens, husband] and me, but I personally reserve my right to have a healthy baby. No athlete competing in Rio should be faced with this dilemma. Female professional athletes already face many different considerations and have to make choices that male professional athletes don’t.”

Oklahoma City Thunder star Kevin Durant said he will play at the Olympics, but he will play without Stephen Curry, James Harden, and his Thunder teammate Russell Westbrook. LeBron James might not attend, but only because of a long seven game NBA Finals series where he emerged victorious over Curry.

150 of the world’s top doctors recently demanded the Olympic Committee either move or postpone the games. Zika has made Brazil the epicenter of the Zika virus outbreak with almost 100,000 documented cases.

I don’t blame them. Also not mentioned are water quality issues and the local Frito Banditos who are running their own version of the Olympic shooting trials.

“dengue, chikungunya and malaria” are no walk in the park, either.