Health concerns have forced some athletes to choose family over the Olympics. 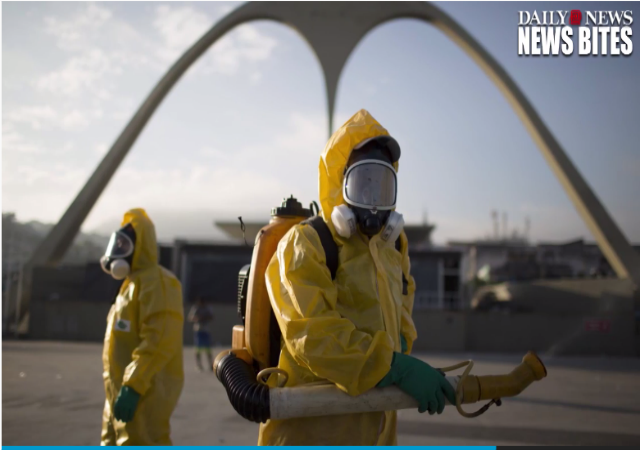 U.S. cyclist Tejay van Garderen has decided not to attend the 2016 Rio Olympics this summer due to the Zika virus.

Van Garderen has concerns he could contract the disease and give it to his pregnant wife and unborn daughter:

“If Jessica were not pregnant right now, assuming I was selected, I would go,” van Garderen told CyclingTips. “But the fact is, she is pregnant. If we were just going to start trying, I’d say we could start trying six months after the Olympics. But when she has a baby in her belly, I don’t want to take any chances.”

His statement comes a week after 150 of the world’s top doctors demanded the Olympic Committee either move or postpone the games.

In February, the U.S. Olympic Committee (USOC) told athletes to skip the games if they have any concerns over the virus. Doctors and experts have linked Zika to microcephaly, which occurs when the brain does not form properly and results in a small head. This leads to serious mental disabilities.

Some NBC staffers have chosen to skip the trip to Rio as well:

“It’s very simple,” an NBC staffer told The Daily News. “I have a family. I have small children and for me, at least, the trip seems too risky. I might want to get pregnant soon.”

The staffer is one of a “handful” of NBC staffers who are opting not to travel to Brazil, network sources confirmed — declining to provide specific numbers.

The network said they told the workers that if they did not want to travel they could opt out.

U.S. goalkeeper Hope Solo has said she might not attend the Olympics because of the virus. Stadiums in Manaus, Salvador, Basília, Belo Horizonte, and Sáo Paulo will host the soccer games instead of ones in Rio. These places, though, “have higher rates than Rio of mosquito-borne viruses like Zika, dengue, chikungunya and malaria.” The Brazilian government has advised women to delay pregnancy for up to two years due to the possible connection to microcephaly, a rare birth defect that occurs when the brain does not form properly during pregnancy:

“I would never take the risk of having an unhealthy child,” she said. “I don’t know when that day will come for Jerramy [Stevens, husband] and me, but I personally reserve my right to have a healthy baby. No athlete competing in Rio should be faced with this dilemma. Female professional athletes already face many different considerations and have to make choices that male professional athletes don’t.”

This is most unfortunate, all around. The health concerns, however, are warranted.

Heck I’d be more concerned about the crime rather than the Zika. Brazil is a mess.

They should be booming, given their climate, resources, and population. But the inevitable result of trying to establish a socialist state is to quell real growth while ignoring serious problems because it becomes inconvenient to pay for solutions after the big chunks taken by corruption and the welfare state.

From The Truth About DDT and Silent Spring

To only a few chemicals does man owe as great a debt as to DDT. It has contributed to the great increase in agricultural productivity, while sparing countless humanity from a host of diseases, most notably, perhaps, scrub typhus and malaria. Indeed, it is estimated that, in little more than two decades, DDT has prevented 500 million deaths due to malaria that would otherwise have been inevitable. Abandonment of this valuable insecticide should be undertaken only at such time and in such places as it is evident that the prospective gain to humanity exceeds the consequent losses. At this writing, all available substitutes for DDT are both more expensive per crop-year and decidedly more hazardous.

–The National Academy of Sciences, 1970

Rachel Carson is the greatest mass murderer in history.

Van Garderen’s “statement comes a week after 150 of the world’s top doctors demanded the Olympic Committee either move or postpone the games.”

Time for Rio to abandon the Olympics and to invoke the force majeure clause in their insurance policy.

Having been to Rio, I’ve seen the poverty and squalor that surrounds that city. Zika and crime are two very big negatives.