Officers to add claims of malicious prosecution, false arrest, and violation of their MD Constitutional rights 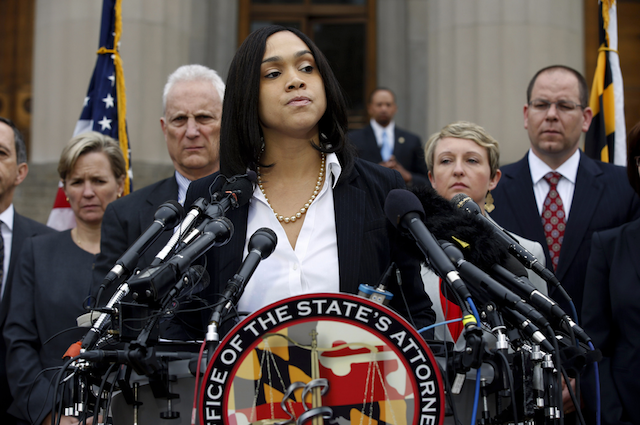 Two weeks ago, we published a post noting that two of the police officers charged by MD State’s Attorney Marilyn Mosby had gone on the offensive and filed a civil suit in Federal Court against her and Maj. Sam Cogen of the Baltimore Sheriff’s Office for defamation and invasion of privacy. (It was Maj. Cogen who signed off on the charging documents against the officers.) Since that post we have learned that a third officer charged in the case, Lieutenant Brian Rice, filed a contemporaneous suit against Mosby and Maj. Cogen on similar grounds.

All three officers claim that both Mosby and Cogen knew that the officers had committed no crime, but nevertheless brought serious criminal charges against them–including manslaughter, felony assault, reckless endangerment, and misconduct in office–despite this knowledge.

The officers claim that Mosby and Cogen brought these charges not because they believed the charges were legally justified, but for political advantage and to attempt to quell the riots, looting, and arson taking place throughout Baltimore.  For this reason, they argue that Mosby and Cogen should not receive the immunity that would normally protect them from legal liability for decisions and action made in the course of their duties.

Essential to this theory of the case is that Mosby and Cogen acted with actual malice, rather than mere negligence.  The officers feel malice is supported by the evidence including the Mosby press conference in which she announced the charges and stated to the assembled crowd:

I heard your calls for, ‘No Justice, No peace.’ Your peace is sincerely needed as I work to deliver justice on behalf of this young man.

Today the officers’ initial claims of defamation and invasion of privacy seem to have been simply the opening salvo against Mosby and Cogen.  According to a report by LawOfficer.com Sergeant Alicia White and Officer William Porter plan to amend their civil complaint to add new allegations of malicious prosecution, false arrest, and violation of the Maryland declaration of rights, article 24 and 26.  According to Political Insider, Lt. Rice’s complaint against Mosby and Cogen is also expected to be amended to include those additional allegations.

Due Process. That no man ought to be taken or imprisoned or disseized of his freehold, liberties or privileges, or outlawed, or exiled, or, in any manner, destroyed, or deprived of his life, liberty or property, but by the judgment of his peers, or by the Law of the land.

It is believed that the officers have sued both Mosby and Cogen in part because they hope to induce Cogen to seek to settle the allegations against him in exchange for his testimony against Mosby. The Daily Caller quotes John Banzhaf, a profesor of public interest law at George Washington University, stating:

If enough pressure is put on [Cogen] he may say ‘can we settle mine and I may tell you some conversations I had with Mosby.’ … Provided they have a bona fide claim against him, even if they don’t think its strong or if they don’t think they win it, the motivation may be to get him to turn over evidence.”

Exciting stuff, especially with the next Freddie Gray trial, this time against Police Officer and van driver Caesar Goodson scheduled to begin tomorrow!  Keep your eyes right here at Legal Insurrection for regular updates and analysis.

BREAKING! The fully updated newest edition of our best-selling book has launched, “The Law of Self Defense, 3rd Edition”!

Provided they have a bona fide

So Daily Caller fixed the “bonified”? Too bad.

Oh to see Mosby unemployed, homeless and pushing a shopping cart while wearing those little gloves with no fingers.

As I speculated a couple of weeks ago, the original filings were “place holders” to avoid statutes of limitation.

In civil procedure, you sometimes file anything plausible, knowing you can (generally) amend pleadings fairly freely to more fully flesh out your case. Once you’re on file, the statutes on most other causes come in on the date of the original filing.

As I mentioned, the malicious prosecution cause is a very steep hill to climb. Not that there is no case here, but it is tough. A lot will depend on Maryland case law. “Malice” in this context CAN be actual intent to harm someone.

False arrest is much easier. I have no idea about the causes under the Maryland Declaration Of Rights.

Sadly, Mosby is protected by absolute immunity from Federal tort liability for acts undertaken as a prosecutor. Overcoming this immunity is a huge challenge. Judge Posner’s writing in Fields vs. Wharie provides a lucid description of the relevant doctrines.

Yah, I don’t understand the reasoning behind filing these in Federal court. They would all stand in state court on these facts, unless there’s some Maryland stuff in the way.

True, but does her absolute immunity when acting as a Prosecutor also extend to her “independent investigation” that led up to the charges against the six officers?

Mosby and Cogen may or may not have absolute immunity, or even qualified immunity, depending upon the exact wording of the Maryland statute governing prosecutorial immunity. Fields v Wharrie stated that Wharrie did not enjoy absolute immunity because his actions in procuring what he knew to be false evidence and then using it in trial to harm Fields stripped him of his absolute immunity under federal guidelines. It further stated that the language of the Illinois statute allowed Wharrie to “enjoy immunity only ‘from liability for error or mistake of judgment in the exercise of their duty in the absence of corrupt or malicious motives.’” Further, any immunity would apply only to the actions of the prosecutor once the trial has started and would not necessarily apply to any actions taken by the prosecutor prior to the start of the trial.

So, if it can be shown that Mosby and/or Cogen knew that there was no evidence to support the charges filed, and filed them anyway, this would be tantamount a conscious, bad faith action which would cause damage to the person charged and immunity may not apply. Though the bar would be high, it is not insurmountable.

There may be a viable State Law claim, but it is wholly dependent on Maryland’s prosecutorial immunity practices.

The law sadly may not give these officers an equitable solution.

There are different statutes of limitations in Maryland for the different torts.

In particular, the elements of malicious prosecution are: 1) a criminal proceeding instituted or continued by the defendant against the plaintiff; 2) without probable cause; 3) with malice, or with a motive other than to bring the offender to justice; and 4) termination of the proceedings in favor of the plaintiff. This cause of action does not accrue until termination of the proceedings, but other torts, such as the false arrest, for example, accrue on the day of the arrest.

3) with malice, or with a motive other than to bring the offender to justice;

THAT is a very low bar for this tort. I’d say that improves the prospects for these cases considerably.

Valerie — do you know whether Maryland State Courts confer absolute immunity on prosecutors for torts arising out of their prosecutorial work?

What is the definition of actual malice needed for malicious prosecution?

Could the fact that the initial warrants listed the wrong police officers, be an indication of malice on Cogan’s part?

What happens if the only officer convicted is Black?

Then, the inmates change their narrative to portray him as a scapegoat victim of a racist system.

System isn’t broken yet; if you’d stop continually trying to blow it up, it could work quite nicely.

Good luck to them. Too bad they can’t also sue the clueless voters who elected this ludicrously unqualified, grandstanding, Al Sharpton-wannabe as state’s attorney.

She placed her prejudices ahead of her duty to enforce the law. Her “justice” wasn’t blind.

A jury trial? Of Baltimoreans?

I think the defendants have to prove intent from Mosby of the charges they are making. Just like with many evil people in this world unless their intent is to rob, harm or defraud you in the course of normal business, it is very difficult to proceed with such charges. Since intent is usually a mental process proving it is very difficult. Not waiting for the ME’s report or the internal investigation from her own people before making these charges is not proof of intent, only incompetence.

Not waiting for the ME’s report or the internal investigation from her own people before making these charges is not proof of intent, only incompetence.

Yes, but her job is to seek justice, and her statement to the rioters of Baltimore basically asking to hold off the destruction while she files charges implies that her intent was not to see justice done for Freddie Gray or the six officers, but to seek a shortcut to prevent more rioting (and possibly grease the skids to higher office).

As soon as she allowed the rioters to dictate the terms of “justice”, she ceased being a servant of Justice and became a servant of The Mob. And as we all know, no person can faithfully serve two masters.

An affirmative action lawyer from an affirmative-action motivated law school bearing the fruit of competence.

I think it unlikely they’ll prevail, but I’m glad they’re taking the fight to her.

yep, on her heels already with 0-1-1, she needs to really start worrying about the reality when it all fails. Mosby Riots™

“If enough pressure is put on [Cogen] he may say ‘can we settle mine and I may tell you some conversations I had with Mosby.’ … Provided they have a bona fide claim against him, even if they don’t think its strong or if they don’t think they win it, the motivation may be to get him to turn over evidence.”

Do the claims against Cogen have to be “bonafied” (LOL) for him to roll over? If he feels he was used by Mosby, or if he just wants to escape the travails of a civil suit, he could just cave – “Lift the suit and I’ll talk.” The fact he’s being sued would even provide cover for him – it won’t seem that he just blabbed, but that he blabbed because he was put between a rock and (what looked like) a hard place.

That face is what flying paper bags full of excrement are for.

Motion to dismiss has been made due to brady violation.

Hey, know who else had ‘absolute immunity’ while acting as a prosecutor?

The photo says it all: she looks like someone who took over the body of a prosecutor and revels in using it for her personal agenda.

She doesn’t understand the post; she only knows it has POWER.