Elizabeth Warren was against Hillary, before she was for her

Elizabeth Warren was against Hillary, before she was for her

Why should anyone believe her now? 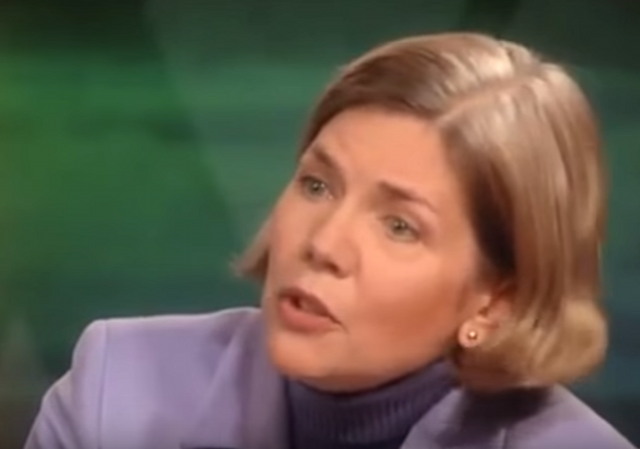 As we’ve already pointed out, Elizabeth Warren’s endorsement of Hillary Clinton proves she’s a fraud. An old video which has been floating around the blogosphere lately, really drives the point home.

Back in 2004 during an interview with Bill Moyers, Elizabeth Warren told a very different story about the politician she now claims to support.

Zero Hedge provides the background, emphasis is theirs:

In an interview that is said to date back to 2004, Warren begins by explaining that she and then First Lady Hillary Clinton sat down and discussed the negative impacts a pending bankruptcy bill would have on women who were raising families. As a result of their meeting Warren said, Hillary went to work in the White House in order to stop the legislation, and ultimately influenced her husband to veto the bill when it came across his desk.

“At the end of the conversation, Mrs. Clinton stood up, and she said professor Warren we’ve got to stop that awful bill.”

“She went back to Washington and I heard later from someone who was a White House staffer that there were skid marks in the hallways when Mrs. Clinton got back as people reversed direction on that bankruptcy bill. When Mrs. Clinton came back with a little better understanding of how it all worked, they reversed course and they reversed course fast. And the proof is in the pudding. The last bill that came before President Clinton was that bankruptcy bill that was passed by the House and the Senate in 2000 and he vetoed it. In her autobiography Mrs. Clinton took credit for that veto and she rightly should.“

However, as Senator Clinton, now entirely beholden to banks after generous contributions made to finance her campaign, her vote was different. Funny how that all works isn’t it?

“One of the first bills that came up after she was ‘Senator Clinton’ was the bankruptcy bill – she voted in favor of it.“

When asked why, Warren points out that as Senator the stakes are different, and Clinton didn’t want to bit the hand that fed her, rather, funded campaign coffers (and of course would later pay Clinton millions to give speeches – it’s always important to have an eye toward the future).

“As Senator Clinton, the pressures are very different. It’s a well financed industry. A lot of people don’t realize that the industry that gave the most money to Washington over the past few years was not the oil industry, was not pharmaceuticals, it was consumer credit products. Those are the people, the credit card companies that have been giving money, and they have influence. She has taken money from the groups, and more to the point, she worries about them as a constituency.

By the way, it seems we’re not the only ones who think Warren is a fraud.

American politics may have no bigger fraud than Elizabeth “Fauxcahontas” Warren.

So I got a good chuckle from Politico’s Thursday story saying the Massachusetts Democratic senator had called Donald Trump, among other grade-school taunts, a fraud.

I don’t know whether Warren fancies herself the pot or the kettle in this one, but she’s definitely a hypocrite.

In fact, while she was preparing to call Trump a fraud, her advisers were leaking to every major press outlet they could find that she was finally going to endorse Hillary Clinton for president, now that she has secured the necessary delegates. What a profile in courage.

Endorsing Hillary could be the most fraudulent act of Warren’s brief political career, since Warren is a less compelling version of Bernie Sanders on economics and even once boasted she essentially “created” Occupy Wall Street.

Start with that Fauxcahontas moniker. She earned it during her 2012 Senate campaign against Scott Brown after it came to light she’d claimed to be 1/32 Cherokee decades ago when seeking a Harvard Law faculty position.

She wasn’t able to back up the claim. “These are my family stories,” she said. As a wealthy white woman, her gaming of the affirmative-action system also made a mockery of race-based hiring and the left’s supposed commitment to “diversity.”

“At the end of the conversation, Mrs. Clinton stood up, and she said professor Warren we’ve got to stop that awful bill.”

Are we sure it wasn’t a reference to “Bill”…??? As in William Jefferson Clinton?

Worse yet, to paraphrase the Dish ad, if elected, we all will get stuck with an ugly Bill.

Both WJC and the national debt.

Who doesn’t understand an endorsement by one politician for another is all about “what’s in it for me?”by the endorser? I’ve followed Warren since this blog first introduced her and agree she is many things, but the change in support is just proving she is a politician.

In simple terms it’s analogous to two authors writing on each others flyleaf – the book you are about to read is the greatest thing since sliced bread.

By the way, it seems we’re not the only ones who think Warren is a fraud.

You know you’re a first class fraud, if you can give Hillary Clinton a good run for her money.

One of the first fruits of Obama’s election with a democrat congress was my credit card rate went from 14% to 21%. I called them at the time & accused them of collusion with the democrats that this was the way they were paid back for all the indiscriminate credit cards they had been issuing over the previous year’s to unqualified card holders due to political pressure.
They didn’t deny that was true.

You can tell a political entity like Warren, Clinton or Trump by the way they change their colors to blend in with other trash on the refuse hill.

What the hell does Trump have to do with this endorsement? He’s the one doing battle with both these women.
Your boy Teddy is STILL sulking in his crying tent. Get over it, you backed a loser.

The Cruz Campaign told voters Carson was dropping out of the Presidential race immediately before the Iowa caucus.

“Marco Rubio’s campaign accused Ted Cruz’s camp of “dirty tricks” Tuesday, after Cruz supporters in Hawaii blasted out an email suggesting the Florida senator was about to drop out of the race.”

A move by the Ted Cruz campaign in Montana has a Kasich co-chairman in the state crying “dirty politics.”

“The Associated Press reported on Thursday that the Cruz campaign is trying to knock Gov. John Kasich of the June 7 ballot by challenging the validity of the signatures qualifying the GOP candidate for it.”