Hillary Clinton is the candidate of Wall Street. Period. 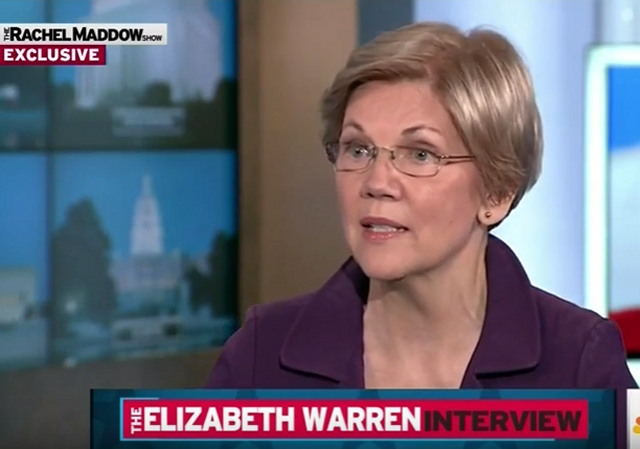 Elizabeth Warren was too cowardly to endorse a candidate during the 2016 Democratic primary but now that Hillary has safely crossed the finish line and Bernie’s revolution is fading in the rear view mirror, Warren is going all in for Clinton.

Elizabeth Warren’s endorsement of Hillary Clinton proves she is a fraud.

This is not a matter of opinion, this is fact. Donald Trump may be a wealthy man but Hillary Clinton is the indisputable candidate of Wall Street in this election.

The fact that Warren would stand “with her” is proof that all of Warren’s anti-Wall Street rhetoric is nothing more than hot air which disappears in the face of partisanship.

Last night on MSNBC, Warren made an appearance on the Rachel Maddow show to announce her endorsement. Maddow asked her why she didn’t endorse anyone during the primary. This was her non-answer, via CNN:

“I thought that the primary was really important and it was an opportunity for Democrats to get out there and show this is what it means to be a Democrat,” Warren said when asked why she withheld her endorsement for Clinton or primary rival Bernie Sanders.

“What Bernie Sanders did was powerfully important. He ran a campaign from the heart…. He brought millions of people into the Democratic Party and for me, this is what it’s all about,” the Massachusetts senator added.

Here’s a quick clip of the actual endorsement:

At various points in the interview, Warren had the audacity to suggest that Trump (not Clinton) is the candidate of big money and special interests. Hillary Clinton has made millions speaking to big banks and Wall Street firms but apparently gets a pass from Warren who has spent years railing against such things.

The hypocrisy wasn’t lost on the Republican National Committee, which released this statement:

The Democratic Party seems to have chosen a “whistling past the graveyard” approach to this situation and is ignoring palpable anger from their progressive base not only over Hillary’s nomination but also of Warren’s endorsement.

Bernie Sanders supporters have been extremely active on Reddit over the past year and a quick perusal of their official Sanders page shows they feel betrayed by Warren.

This thread includes the following comments:

“Unliked her on FB and ‘unfollowed’ on Twitter. Not much but it felt good and if a significant number of us do it, it will at least send her a message.”

This thread has more:

“She just now said that the reason she didn’t endorse anyone is because she felt the primary just “needed to go forward.” I don’t even understand what the hell that means. It’s a non-answer.”

“Now she’s talking about money in politics and lobbyists, while endorsing Hillary at the same time, I think she lost it completely.”

“Warren is a traitor.”

How Hillary can say this and get Warren’s endorsement boggles the mind:

“Our elections should be shaped by voters’ voices—not bought and sold by corporations & special interests” —Hillary: https://t.co/QUJomlql0N

Hillary Clinton is the candidate of big banks and Wall Street. Warren’s endorsement of her proves once and for all that she’s a fraud.

Watch a longer video of Warren’s appearance on MSNBC below if you like and as always, read the whole truth about Elizabeth Warren here.

“Warren is a traitor.”

That is so SAD…

There are actually people out there who believe(d) Warren. Hard to imagine…

This can only mean one thing. Warren thinks that Hillary will cut her in on the action.

Roseanne Barr see’s through Hillary for what she is. Surprisingly she’s as much as endorsed Trump as the counter. She’s been a Sanders supporter.
I’ve suspected since the uproar over TPP there was an opening of mutual interest with the left over these internationalist/corporatist issues. They sent a pallet load of petitions to congress in opposition. I thought at the time conservatives had missed an opportunity when they didn’t send in a similar petition effort.

Oh no! A Demorat who is a fraud? Can you name one who isn’t? It is a known fact that no Demorat ever runs on what they actually plan to do once in office. They even admit this, so the entire Demoratic party is a fraud.

How can anyone take the word of a woman who told tall tales that she was part Indian (she has high cheek bones) to benefit her education possibilities.

(some members of my family have high cheekbones, so I’m allowed to say that)