What We Know About EgyptAir Flight 804

What We Know About EgyptAir Flight 804

Is this the “final nail in the coffin” of Egypt’s tourism industry? 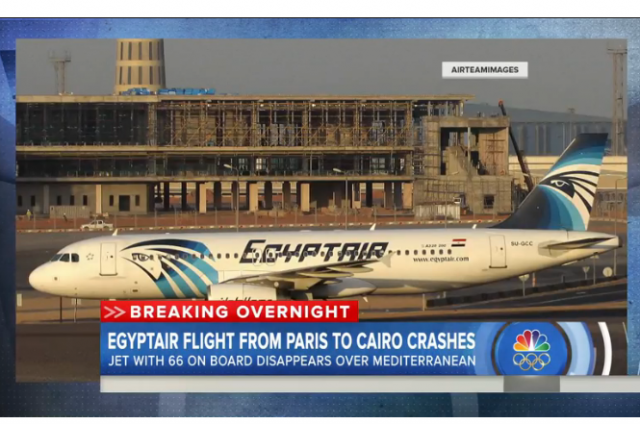 The investigation into the disappearance of EgyptAir Flight MS804 continues, and there have been disturbing developments since our last report.

When I described the troubles with the TSA (Transportation Security Administration) earlier this week, I noted that terror organizations were targeting covert air marshals.

It is now being reported EgyptAir Flight 804 had three of those security professionals on board when it disappeared.

Three air marshals were among the 66 people aboard EgyptAir Flight MS804 that crashed while flying over the Mediterranean Sea early Thursday, authorities said.

France’s transport chief Alain Vidalies told reporters that having that many security officers on such a flight was “the usual practice.” He added that the plane — which can carry up to 189 passengers — was not transporting any freight.

Former NTSB investigator Greg Feith told MSNBC that Egypt had boosted security recently, which could explain the number of officers on board.

Egypt has plenty of reason to boost security. Recall that last October, a Russian Metrojet went down over the Sinai Peninsula of Egypt and killed all 224 passengers and crew aboard. The flight originated from the resort town of Sharm el Sheikh. While there was much disagreement initially about what happened to the flight, after the Russians said they had found explosive residue as evidence, Egyptian President Abdel Fattah el-Sisi acknowledged that terrorism caused the crash.

Citing how safe AirBus planes are with the redundant safety systems, and noting that plane crashes do not normally occur when planes are at cruising altitudes, the U.K. Mirror Travel Editor Nigel Thompson asserts that this may be the “final nail in the coffin” of Egypt’s essential tourism industry.

Eric Wells, Adjunct Professor in the Department of Classics and Archaeology at Loyola Marymount University in Los Angeles and host of Eric’s Guide to Ancient Egypt  also expressed his concerns:

It took years for the Egyptian tourism industry to recover after the tourist massacre at Luxor in 1997. Tourism still hasn’t recovered since the 2011 revolution. The question I am most often asked is “is it safe to travel to Egypt?” With the attack on the Russian airliner in October, and now this, I think most people will feel unsafe traveling to Egypt and it will likely be a decade or more before tourism will recover to levels they were at in the mid 2000s.

According to CNN, there were smoke alerts in the moments before the flight crashed:

There were smoke alerts aboard EgyptAir Flight 804 in the minutes before it crashed in the Mediterranean Sea, according to flight data CNN obtained Friday from an Egyptian source.

The data was filed through the Aircraft Communications Addressing and Reporting System (ACARS), a data link for sending messages between planes and ground facilities. A screen grab of data has time stamps that match the approximate time the aircraft went missing early Thursday.

Authorities have not said what may have caused the plane carrying 66 people to crash while flying from Paris to Cairo.

Egyptian officials say they suspect terrorism, but no group has come forward to claim credit.

USA Today has personal stories of those affected by the crash:

Why do officials suspect terrorism?

At some point before dropping off radar, the plane swerved 90 degrees to the left and then made a 360-degree turn to the right before plunging first to 15,000 feet, then 10,000 feet, and disappearing from radar, Greek officials said.

“The nature of the way the plane went down — the way it veered and then fell out of the sky leads us to believe this,” the official said.

What Greek officials described as swerving was likely pieces of the aircraft being picked up on radar as they fell from the sky, U.S. officials told CNN on Thursday.

As of now, investigators have found nothing implicating the flight crew or security officials aboard the plane, the Egyptian official said.

As with the Sharm el Sheikh incident, investigators will need quite some time to determine exactly what happened and the motivation.

I’ve been reading that the fire detectors were activated in the last few minutes of flight. Apparently they send out some sort of signal.

Terrorist attacks usually happen shortly after the takeoff, as was the case with that Russian airliner.

Unless one wants the plane to crash into the sea making recovery and analysis of the debris much more difficult. The Casio watch/nitroglycerin bombing of Philippines 747 was timed to blow up over water… but delay in takeoff altered timeline. That attempt just missed the main fuel tank because of different seating pattern.

The plane’s readout back to base showed smoke in lavatory next to cockpit just before loss of contact.

If they had an all Christian ground crew ( there aren’t enough Jews left in Egypt to make a crew) people might have confidence in making it back alive. Any jews remaining in any muslim majority country are certifiably insane with a strong death wish.

No, Egyptian tourism won’t end, nor will department stores, movie theaters and markets. But there will be TSA agents searching everyone going in. That is our fascistic future.

That’s because of whom we elect letting domestic politic forces get in the way of taking care of business by getting medieval on these savages.

When airport personnel can place bombs on planes, there is little an on board marshal can do and it renders passenger screening useless.

Don’t worry, there’s a big surge in Muslim ground crew in the US. It would be bigoted to look askance at that.

If the flight originated in Paris, how does that reflect on Egyptian anything?