EgyptAir Flight 804 Disappears on Way to Cairo From Paris

EgyptAir Flight 804 Disappears on Way to Cairo From Paris 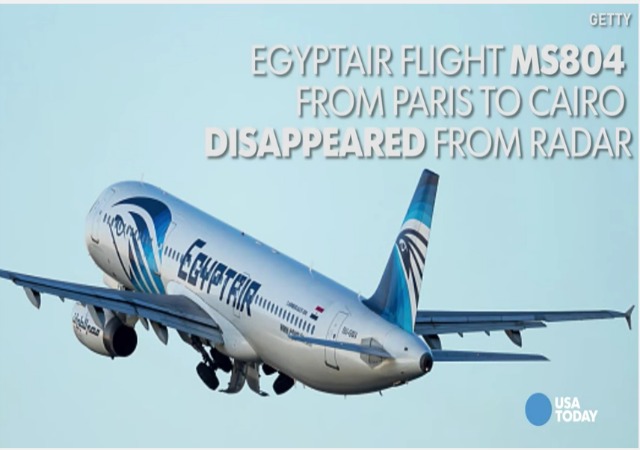 EgyptAir Flight 804 disappeared over the Mediterranean Sea on its way to Cairo from Paris with 66 people onboard.

Not much is known at this time, but Egyptian Civil Aviation Minister Sharif Fathi has mentioned terrorism without any proof:

“We do not deny there is a possibility of terrorism or deny the possibility of technical fault,” Fathi said at a Cairo news conference. “I will continue to use the term missing plane until we find any debris.”

Later at the same news conference, he indicated that while there were “no known security issues” with passengers aboard the plane, the probability of terrorism downing it is higher than the likelihood of a mechanical cause.

EgyptAir urged everyone to stop jumping to conclusions.

of the disappearance of EGYPTAIR flight MS804 and the company confirms that the reason of disappearance hasn't been yet confirmed.

and to abide by the official press releases issued by EGYPTAIR media center.

The plane did not encounter any bad weather over the sea and no one sent out a distress call. The Greek air traffic controllers tried to reach out to the pilots, but they did not answer:

“During the transfer procedure to Cairo airspace, about seven miles before the aircraft entered the Cairo airspace, Greek controllers tried to contact the pilot but he was not responding,” he [Kostas Litzerakis, head of Greece’s civil aviation department] said.

Greek authorities are searching in the area south of the island of Karpathos, Defence Minister Kammenos told a news conference.

“At 3.39am (0039 GMT) the course of the aircraft was south and south-east of Kassos and Karpathos (islands),” he said. “Immediately after, it entered Cairo FIR (flight information region) and made swerves and a descent I describe: 90 degrees left and then 360 degrees to the right.”

Greek officials sent out “aircraft and frigate to the area” immediately. They told Reuters people found “two floating objects, colored white and red” in the sea about 230 miles south of Crete.

Flight MS 804 already stopped in Cairo, Asmara, and Carthage earlier in the day. The Airbus A329 holds 145 passengers, but only carried 56 passengers on this flight with 10 crew members.

*UPDATE* Officials have discovered the wreckage of the airplane near the Greek island Karpathos.

Now the Associated Press reports Greek officials claim the items found does not belong to 804.

BREAKING: Senior Greek air safety official says debris found so far in Mediterranean does not belong to an aircraft.

I imagine security in France is relatively good. So how would they smuggle a bomb on board? I’ve always thought it’s only a matter or time before a suicide bomber conceals the the explosives inside his body, like a drug mule. Maybe that time has arrived.

Not so sure about that. If no one on the plane is registering any ‘hits’ to any security agencies, it’s probable that this was placed by an airport worker in France.

I think we have to assume that most west European airports contain ISIS cells. Anytime they are on the same shift, there is danger of them covering for each other and potentially creating incidents. Presumably jihadis will want to grow the cells over time, then create a “Big Bang” event on as many simultaneous flights as possible
http://insider.foxnews.com/2016/04/02/report-50-isis-supporters-work-brussels-airport

IF it was a bomb, and it appears probable, it was put on board by a French baggage handler, again probably.