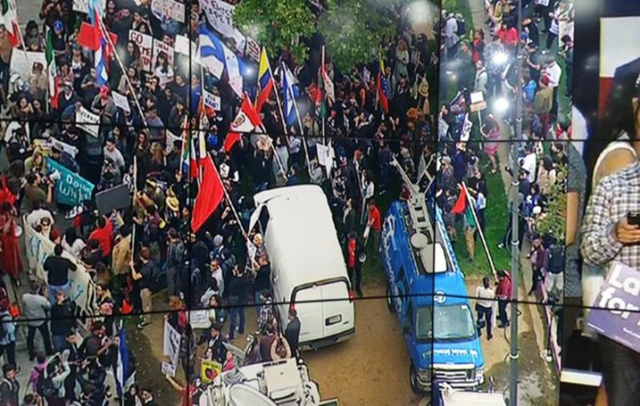 The California primary is heating up hotter than the sauce Hillary Clinton carries.

We described the riots and mayhem that surrounded Donald Trump’s appearances in the Golden State last week, replete with Mexican flags and arrests.

Now, Bernie Sanders’ supporters targeted a Hillary Clinton event in Monterey Park in Los Angeles, forcing her to cut short her speech to a mere 14 minutes.

…[S]upporters of independent Vermont Senator and upstart Democratic presidential candidate Bernie Sanders came out in force to disrupt a Hillary Clinton speech in Los Angeles, forcing her to end the event early. Speaking to a largely Latino crowd in Monterey Park, Clinton weathered interruption after interruption, and as the local ABC affiliate reported, the protesters being led out all had Bernie Sanders’ name on their lips.

Arrests were made, and local officials and the FBI are working the background associated with the demonstrators removed from the event.

A local NBC reporting team followed the developments, and interviewed several of the protesters.

Supporters of Clinton’s Democratic rival, Bernie Sanders, confronted Clinton’s backers outside the college as a cordon of police kept watch.

“She would do absolutely nothing to help the middle class,” said Cilena Aziz, a Sanders supporter. Among the protesters gathered were members of Union del Barrio, a political group with a presence in South Los Angeles.

They said Clinton did not support a national $15 minimum wage and has been a part of anti-immigration policies, including deporting undocumented children.

“I believe that being a Democrat is for the people,” said Regina Cruz, a Sanders supporter. “I have a really difficult time believing that she is really for the people.”

In another Los Angeles speech, Clinton suggested that Bernie Sanders has essentially passed his “sell by”date.

“I am three million plus votes ahead of Sen. Sanders, right? I am nearly 300 pledged delegates ahead of Sen. Sanders. When I was running against then-Sen. Obama, he and I were neck and neck in the popular vote. Depending on how you counted it, I was a little ahead or he was a little ahead. He was about 60 or so pledged delegates ahead. A much, much smaller margin than what we see in this race,” Clinton told a group of black community leaders this morning, just one day after it became clear Donald Trump will be the likely Republican presidential nominee. “But I knew that he had won,” she continued, “Because it matters how many delegates you have, whether it’s 60 or 300, right?”

A closer look at the history shows that Hillary did not end her 2008 quest for the White House until after the June primaries.

Furthermore, a recent trending topic on Twitter was #DropOutHillary.

I suspect Sanders will be staying for the duration of the primary season, if for no other reason that the more delegates he gets, the more power he will have to shape the party’s platform.

Hillary Clinton is heading to Oakland on for another rally on Friday. I just bet she will be getting another warm greeting from even more Sanders supporters.

Shrillary caught in another falsehood, go figure. In other news: the Sun rose in the east this morning.

Bernie’s a fascist, and his supporters want fascism. As the old New Jersey slogan used to go, “Perfect Together”.

I suspect Bernie will be staying in as long as possible because he has never had it do good. 4star hotels, private jets, only the best food, people waiting on him, and most important people listening to him and clapping/chanting his name. That contrasts to him tossing in the towel and going home to eat TV dinners and having only his wife (who is tired of it by now) being to only one to spout off too.

Plus the hangers on who scent opportunities for money and power are not just going to let him fold up without a fight as they see themselves running the country and being the new elite.

Sorry for the typing pfft it is pre caffeine and the screen is too small.

The guy is a senator. He’s been freeloading off confiscated American taxpayer income for awhile to get all of those free perks while never having to use post-tax income to pay for it.

This is a guy who couldn’t even cut it at a commune back in the day.

They kicked him out because all he wanted to do was sit around and talk politics and revolution instead of doing his “fair share” of work.

I am just wondering since she spoke for 14 minutes if she got paid the full $225,000 for her normal hourly rate or was her pay prorated.

She’ll say it’s not her fault they didn’t have crowd control and keep the entire fee…..it’s just how she is.

Someone can listen to her for 14 minutes? And they said waterboarding was cruel. smh

Rarely before has there ever been a more incompetent candidate running for office. This likely her greatest attribute and biggest selling point to her supporters such that she will be a shoo in.

“I have a really difficult time believing that she is really for the people.”

It depends on what your definition of is, is.

Hillary Clinton is to leadership as Elizabeth Warren is to Cherokee.

Isn’t that sweet. Protesters get violent at a Trump rally and few get arrested, most likely released without charges and no one investigated to see who was behind it all.

Protest Hillary, the local po-po and the FBI get involved to find out who would dare speak out against the smartest and most beautiful and most perfect candidate to ever run for the Presidency

Ok…I just threw up a bit in my mouth typing that last sentence.