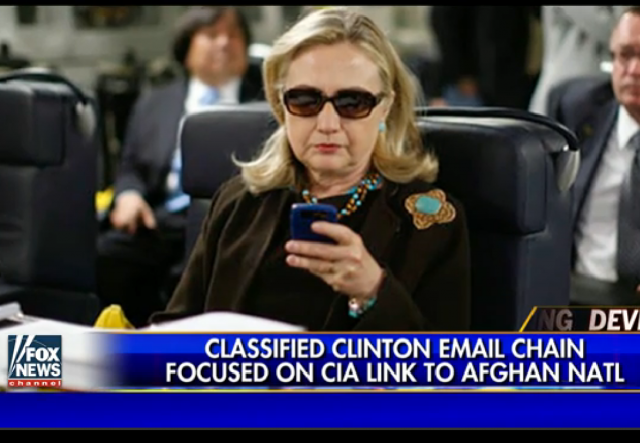 We’ve been covering the Hillary Clinton email scandal here at LI, and now it seems that the Obama administration is actively working to prevent her deposition.

The Obama administration is trying to prevent former Secretary of State Hillary Clinton from being deposed in an ongoing open records case connected to her use of a private email server.

Late Thursday evening, the Justice Department filed a court motion opposing the Clinton deposition request from conservative legal watchdog Judicial Watch, claiming that the organization was trying to dramatically expand the scope of the lawsuit.

Judicial Watch is “seeking instead to transform these proceedings into a wide-ranging inquiry into matters beyond the scope of the court’s order and unrelated to the FOIA request at issue in this case,” government lawyers wrote in their filing, referring to the Freedom of Information Act.

The lawyers wrote that the request to interview Clinton “is wholly inappropriate” before depositions are finished in a separate case also concerning the email server.

Judicial Watch’s FOIA case began as a way to seek documents about talking points related to the 2012 terror attack on U.S. facilities in Benghazi, Libya, but has since grown to encompass wider questions about Clinton’s use of a personal server while working as secretary of State.

Last week, Judicial Watch asked the court to interview Clinton and five other current and former State Department officials about the server, after it received a judge’s permission to move ahead with the process.

You can read our coverage of Judicial Watch‘s case/s and FOIA requests here.

Have to try and protect obama, after all he’d have to pardon her when she’s convicted and that could ruin his “legacy”.

Jimmy Carter has to be the happiest person alive now that he’s lost his title as Worstest Idiot EVAH to Be President.

Carter was a terrible president, but LBJ was a lot worse.

I think the legal term for this is ‘circling the wagons’.

That, or “assuming the position” on behalf of the client.

Trouble is, if it was made to the same court that just OK’d the discovery, and there’s nothing to indicate otherwise, the judge is unlikely to double back on his/her own ruling. The issue has been aired already.

Now why on earth would the most transparent Administration in history care? They may be able to shut out Judaical Watch but can they throttle FBI Director James Comey? Expect HRC’s health problems to become much more severe soon. My question: “Mrs Clinton was the President aware you were using a private email server?

Yup…that would “expand the lawsuit”!!

I think one of the reasons both establishments are so upset about the potential of a Trump presidency is that he’s a loose cannon. Each establishment party covers for the other as they swap the executive office back and forth. A rogue individual, as Trump may be (heck, even as Bermie may be), getting into office could disclose everything that one party or another has been hiding (in the instant case, Fast and Furious, Benghazi, and Hillary’s server – why it was setup, how it was used, and what secrets may be been put at risk by its use), relying on the opposition party to do its half of the deal by keeping these things hidden. A rogue may not only let the cats out of the bag, he may actually decide to prosecute establishment criminals, something that never seems to happen in spite of the game of musical chairs in the oval office. How would you behave if you knew the next person in office would investigate your behavior? How would you be tempted to act if you knew your successor expected virtual immunity from prosecution so long as he didn’t prosecute his predecessor? For this reason the Democrats are scared witless at the prospect of a Republican victory, and they live in abject terror of a Trump presidency.

Each establishment party covers for the other as they swap the executive office back and forth.

Nice glib slogan, but it carefully covers up the constant dragging of US governance away from the Constitution in a leftist direction. Trump’s got apparent flaws all over him, but so do both of his Democrat opponents. And Trump’s hostility to the world of political correctitude may give us a glimmer of hope that at least SOME of the disgraceful PC distortions of governance and civil tolerance will be rudely kicked to the curb.