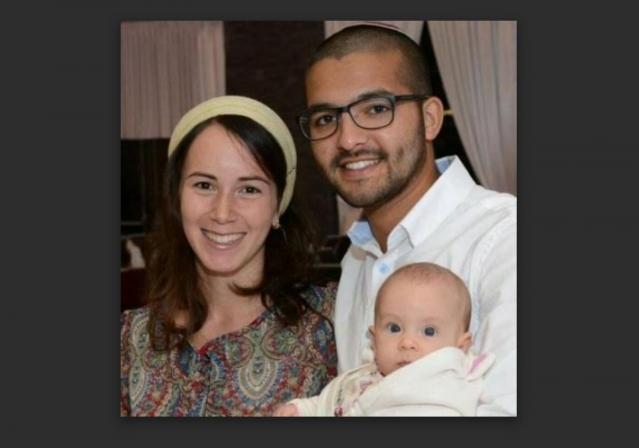 Today is Israel Memorial Day, in which those killed in combat and in terrorist attacks are remembered.

One of my goals is to follow up on the victims of the Knife Intifada. Last week I updated regarding the murder of Israeli mother Dafna Meir, who was stabbed in her home by a Palestinian teen in front of her children; the 16 year old was recently convicted.

When I travel to Israel again, currently planned for June, I hope to meet with several of the families.

You may recall our on February 19, 2016, report on the murder of Tuvia Yanai Weissman, 21, who was stabbed to death in a supermarket while he was shopping with his wife and baby daughter. When he saw the Palestinians stabbing other shoppers, he rushed towards them and fought them with his bare hands, but was killed in the process.

He was an American citizen.

The Palestinian attackers were 14 years old. They were shot by a private citizen during the assault. One died and was treated in an Israeli hospital.

Three Palestinians teens were indicted in the attack.

Weissman’s heroism in coming to the rescue of other shoppers under attack has been recognized by the IDF.

The army awarded Staff Sgt. Tuvia Yanai Weissman, who was killed in a terror attack earlier this year, one of its highest honors Tuesday for representing a “shining example of IDF values.”

Weissman had been shopping with his family in a West Bank supermarket on February 18, when two Palestinian terrorists began attacking customers. The 21-year-old off-duty soldier and another man were seriously wounded in the attack; doctors at Jerusalem’s Shaare Zedek Medical Center pronounced Weissman dead a few hours later.

As he was off-duty at the time, the Nahal Brigade soldier was without a service weapon, but nevertheless fought the attackers “barehanded,” the army said in a statement about his award.

“He demonstrated in his actions a shining example of IDF values,” the army said.

Certainly Weissman should be remembered as someone of valor. But he also was a husbsand and new father. His wedding video shows what what lost:

A beautiful smiling wife and darling baby daughter — what a travesty to see this courageous man fall. God bless the IDF.

“As he was off-duty at the time, the Nahal Brigade soldier was without a service weapon…”

Forget the medals. In honor of his actions, ensure that others are armed so that they too will not be stabbed.

A fully automatic combat weapon is not the easiest thing to carry around with you. That’s generally what we’re talking about, not a sidearm. But plenty of Israeli soldiers are required to carry them when they do home, so there are plenty around. It’s hard to explain the culture, but Israelis neither love nor hate guns. When you see someone (male or female) with a combat weapon, it just makes you feel safer. And you still push them to get onto the bus. (They are generally very polite, BTW.)

Maybe we could extradite the killer? If he’s in an American jail, then maybe we won’t force Israel to release him.