Tuvia Yanai Weisman, may his memory be a blessing. 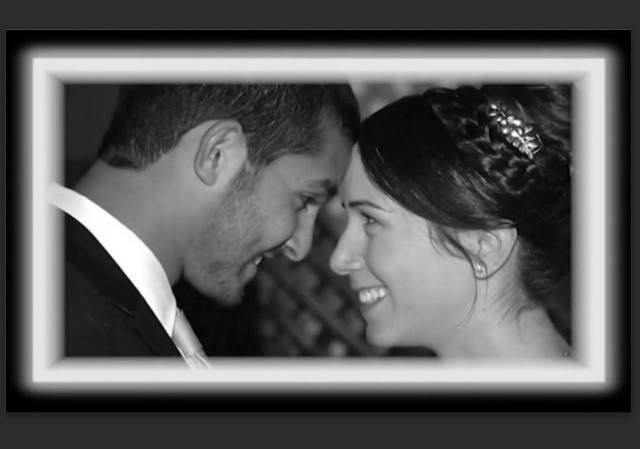 On February 18, 2016, Tuvia Yanai Weissman, 21, was stabbed to death in a supermarket while he was shopping with his wife and baby daughter. 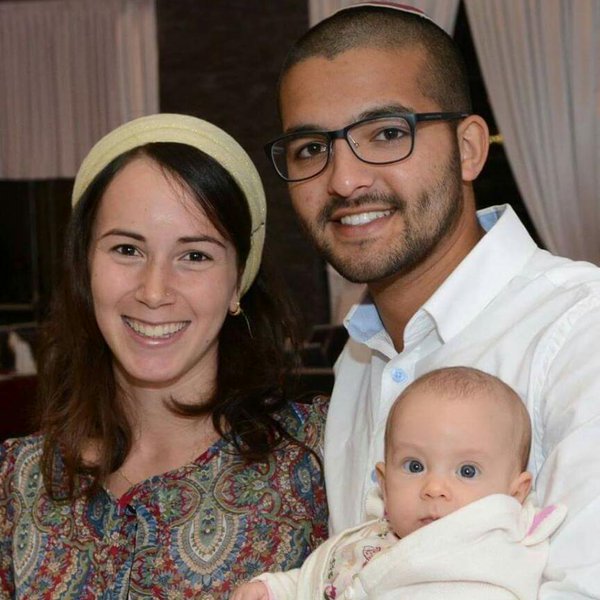 Another Israeli, 35, was wounded and is being treated in the hospital.

The Palestinian attackers were 14 years old. They were shot by a private citizen during the assault. One died and the other is an Israeli hospital where he will receive as complete medical treatment as the person he stabbed.*

These stabbing attacks by Palestinian minors, of which there have been many, don’t happen in a vacuum. There is widespread incitement both officially from the Palestinian Authority and Hamas, and also in social media.

This video was released just days ago:

WATCH: There are no words for this horrific children's cartoon that calls for the murder of Jews.Incitement by Palestinians is fueling a terror wave in Israel. Call on the world to do more at IsraelIsUnderAttack.comvia: MEMRI-TV

Posted by The Israel Project on Wednesday, February 17, 2016

This other video was released in November 2014.

It hit me hard when I saw it:

There’s something about a wedding image of a young person just murdered that gets to me, as it did when it was just a photo.

Tuvia Yanai Weissman was buried this morning in Israel:

At the funeral on Friday, Weissman’s father Dana eulogized his son, saying, “you loved your daughter Neta so much. You took her to see the flowers in the Negev a day before you were murdered. No hatred and no enemy will end that (love).”

His mother Orli said, “I release you to God, but I don’t know if I’ll be able to release the love. You were very independent and went on your path.”

Weissman’s bereaved widow Yael said, “you were always full of endless giving, if you hadn’t run there (to stop the terrorists) you wouldn’t be the Yanai that I know and fell in love with. If only you could have been with Neta more, how many dreams we had.”

“Before we entered the supermarket I asked you when we will be a normal family and you said it won’t be long,” she said, in a reference to his ongoing intense army service.

“My beloved, who would believe that I would write to you while you are no longer with me, in the short time we had on the weekends you made sure to take care of everything. You heard that something happened and you ran and I waited for you.”

“We managed so much in two years of marriage even though we weren’t together a lot.”

“Yanai you are a true hero of all the nation of Israel, you knew that you had no weapon and nevertheless you ran. I want to thank you, I merited to learn from a talented and special man. Thank you for our Neta,” concluded Yael. 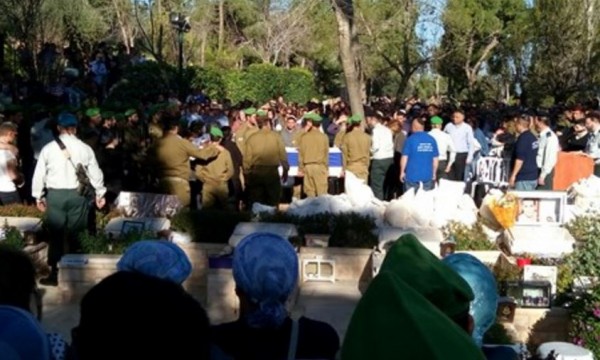 [* This sentence was corrected to reflect that one attacker died.]

Every time I read of one of these attacks in Israel, a sadness overwhelms me. I pray for the tiny country’s strength and resolve to increase. Although a Catholic, I believe the Jewish people are truly God’s Chosen and will continue to pray for Israel’s safety.

The crimes against the children are also serious: child endangerment, abuse, and neglect. There is also corruption of minors and contributing to the delinquency of a minor. Hamas TV and the Saudi textbooks are full of this type of crime. The evidence is clear and overwhelming.

The way that Islamist Perverts justify these actions, by claiming that any sin is ok so long as some cleric says Allah wants it, is so far beyond filthy that most people don’t want to believe it happens.

My heart is aching for this family and their country.

Sorry to bring “politics” into this beautiful tribute, but why in the H-E-two-sticks are we giving financial aid – BILLIONS – to the Palestinians?

People may claim that it’s for humanitarian aid. But it’s like federal funding of Planned Parenthood: the more money they are given for the “good” they do, the more of their other funding they can use for the evil.

To paraphrase: Israel will have peace when the palestinians love their children more than they hate Jews.

I’m away from my library right now. I know this was said by one of the Captains of the original six frigates deploying to the Caribbean during the Quasi-War with France. French privateers were raising holy hell with US mechant shipping.

I think it was Truxton. I think he skippered the USS President.

He noted that nowhere in his orders were pirates mentioned. Note the above; privateers.

Why weren’t pirates mentioned? Because as Truxton noted we already knew how to treat them. Catch them, hang them.

It’s not enough to get angry about a young man cut down while he’s shopping for his wife and child. We need to embrace reality. We’re a joke. Look at what Putin is doing in Syria. Any damn thing he wants. Is anyone threatening to take him the farce known as the International Court of Criminal Justice? No. And if somebody did, would he care.

Meanwhile the Law Of Armed Conflict is all on our side (when I speak of us, we, our, etc., I’m speaking in this context at least of the US and Israel). We should be giving illegal combatants a short, summary military tribunal and then putting them against a wall to be shot.

But instead, what are we leading people to think?

That western values aren’t worth defending. We have all those rules regarding the LOAC, but not even we will defend those rule BY ENFORCING THEM.

What the h3ll good are they, then.

John Paul Jones, “I have not yet begun to fight.”

Bull Halsey, “When I’m done the Japanese language will only be spoken in h3ll.”

Us, “CNN might have said something that hurt our feelings.”

My way of saying that talk of a “cycle of violence” is rubbish.

You don’t have 14-year-old Israelis stabbing Palestinians to death.

And when people talk of the cycle of violence between Palestinian terrorists and the IDF, they are speciously equating the violence of aggression with the violence of self-defense.