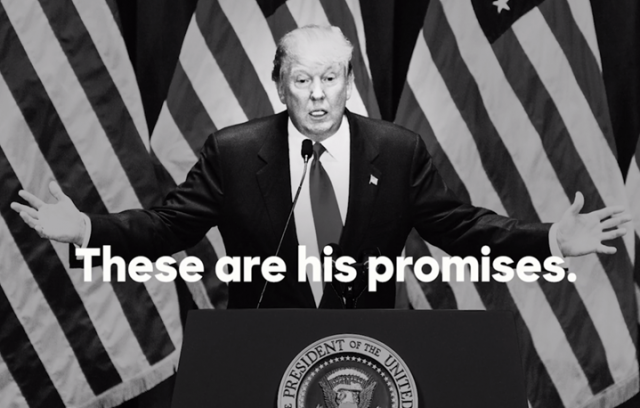 I still assert that Donald Trump will vanquish Hillary Clinton in the fall, especially when his likely opposition begins working for him!

Via Fox News contributor and talk show host Tammy Bruce comes an ad being put out by the Clinton campaign. The video backfires, because it provides example after example of strong positions Trump offers that appeal to his record-number of primary voters.

Very nice of Hillary Clinton to run a pro-Trump ad, too? https://t.co/lYGCyHb7BA

Trump has also picked-up some key anti-endorsements. We have already reported that Governor Jeb Bush is #NeverTrump. But, in my opinion, the presumptive Republican nominee earned the most critical anti-endorsement today.

President Obama, reacting to Donald Trump effectively wrapping up the Republican primary race earlier this week, took his opening shots Friday at the now-presumptive nominee – urging tough scrutiny of the businessman’s record and saying, “This is not a reality show.”

The president was asked about the Republican race during an impromptu press conference following remarks on the economy at Friday’s White House briefing.

“[Trump] has a long record that needs to be examined,” Obama said, urging the public to “take seriously” some of the controversial statements he’s made.

“This is a really serious job. This is not entertainment. This is not a reality show. This is a contest for the presidency of the United States,” he said.

These comments are rather shocking in light of the celebrity treatment Obama has craved over the past 7-plus years. In fact, Obama appeared in a couple of reality TV programs himself, including the start of Season 7 of Jerry Seinfeld’s show, Comedians in Cars Getting Coffee.

Then, there was the Man vs Wild Bear Grylls with President Barack Obama!

I suspect he will also be a much better President, especially if he keeps to the promises listed in the Clinton campaign ad.

You forgot one other promise Hillary. He said he would prosecute you the first day too.

That alone should be enough to get him elected.

Speaking of “reality shows,” riddle me this:

Which egotist gave an interview to a self-promoting internet whackjob who sits in a bathtub filled with cereal and milk:

What a miserable shame…

What a strange ad campaign.

Trump is bad because he’ll keep his promises. By contrast, Hillary is good because … what? Because there’s no chance in hell that she’ll keep any of her promises?

Obama has a problem; true enough, the Presidency isn’t a reality show (certainly it hasn’t been during Obama’s watch—no sign of reality there at all). But then what is it? From watching Obama for two terms now, an unbiased observer might think that it’s a series of golf games, punctuated by long and lavish vacations alternating with Democratic fundraisers. But Trump plays golf, so Obama can’t dump on him for that. I don’t know how hot Trump is for vacations, though; if he doesn’t take enough of them, Obama can beat up on him for not knowing what’s really important in the office of President.

What always amazes me is lack of self-awareness of Obama and other liberals.
Trump was the first out with his positions and promises for many things. Heck, he was the “canary” in effect for things such as strong borders. Only after people came out in support for those positions did we see many of the other 16 candidates “me too” those positions.
Trump is a leader. The others….followers and failures.

It’s a bad thing to be ignorant.

When you’re stubbornly, insistently ignorant, you’ve volunteered to be an idiot.

“It’s a bad thing to be ignorant.”

You’ve certainly volunteered for that.

T-rump is NOT a “leader”. He IS the late-adopting, johnny-come-lately campaign “conservative” personified.

Rick Parry and Ted Cruz were fighting the immigration war when Der Donald was funding the Deemocrates in the Gang Of Eight, meeting with Dreamers, and decrying Romney’s self-deportation ideas as mean and crazy.

But you’re about to find out how “not a leader” Der Donald really is. Good and hard, if he’s elected.

Posting here is becoming quite dull – reading the pro-Trump nonsense is so discouraging.

Trump will be CRUCIFIED by the MSM and Democrats. They have INTENTIONALLY been holding back the attacks. And – then what?

He will fly back to NY, on his Trump plane, and continue to donate to the Ruling Class (i.e. Democrats) while he rakes in the dough. He will probably start a new reality show, and I predict write another book about his campaign…..i.e. how he brought down the GOP and the nation by conning the angry, vengeance-seeking, fearful faction of the GOP.

And, should by some “miracle” he does win…… It will be Hillary’s buddy, Boehner’s golfing and texting buddy, who will be calling the shots.

How anyone can not see this……….

Media hasn’t given Trump $1.9 BILLION in free airtime because they like him or even for the ratings his clown show draws, although they clearly enjoy those, too.

It’s to ease him to the GOP nomination as the easiet for Democrats to beat, which isn’t even close.

Once official in Cleveland, the gloves come off. The real attacks begin. No more free coverage of rallies. No more soft phone-in interviews (except Fox, clearly in the tank). They will needle him daily, get under his skin – so easy to do – until he just melts down. The man is unbalanced & will fold like a cheap suit.

But that’s okay. He only ran to help Democrats & to prove how stupid & gullible much of the Republican base is.

This is truly like déjà vu all over again.

I clearly remember trying to tell people about how awful Obama was…..and they thought I was delusional, a hater, etc.

The MSM picked our nominees in both those elections……yup – déjà vu all over again.

So let me get this straight. According to the polls and the media Trump is going to loooooooose big! So, if true, why does Obama comment on Trump as if he may actually beat Hillary?

And old prevaricating hag and an attention whore both condemn Trump.

Meanwhile, here is Trump’s anti-Clinton ad. It is going to be very effective on Trump fans, and I am sure Beavis & Butthead contingent. For everyone else, it makes people crawl whimpering into the corner, wondering what happened to this country

IIRC – when Trump was seen as a loser who could screw the party with a 3rd party candidacy, didn’t they demand that he and everyone else sign a commitment promising to support the nominee? Didn’t the anti Trump supporters demand it too? Seems to me that the 2 faced liars are the ones who are now not willing to do what they signed on to do, and, by extension, their supporters. Trump was not my favorite, and is not now my favorite. But, for the next 6 months, he is the only viable alternative to a Hillary presidency.
3rd party votes are the curse of conservativism. The fight between Taft and TR (Bull Moose Party) split the Rs and got Wilson elected which was the model for FRD. Perot / Bush I got Clinton elected. The hard core right who couldn’t bring themselves to vote for Romney got us Obama II. This one will get H Clinton elected. How did we gain from any of those? How??? That’s not a rhetorical question. If you want to justify doing it again, you better be able to show how those helped us. Can anyone???

“and, by extension, their supporters.”
Not to offend the gentlemen, but this is just BS.

To be clear, those who supported the call for Trump (et al) to sign the agreement, and who now support #NeverTrump, have failed to keep their word (The LIE). Lying (you can’t trust him) is the offence they say Trump will commit at some future date. An offence which, they argue, makes him ineligible for the job (THE 2 FACED PART). Those who continue to support the candidates who lied are as guilty as the candidates. QED

It’s BS because Trump said several weeks ago in a town hall with Anderson Cooper that he disavowed the pledge to support the Republican nominee. He thought he was probably going to lose the nomination if it went to a contested convention, so he wanted to delegitimize the process to rile up his supporters by pretending the process was rigged.

If you watch the clip of Obama included in this post above, every single one of the items Obama says Hillary and Bernie agree on, Trump agrees with too: infrastructure spending; healthcare; raise minimum wage; prudence in military; and taking care of veterans. Obama failed to mention that Trump wants to raise taxes, something else they all agree on.

The only real difference between Trump and the Democrats is that Trump wants to build a wall to keep brown people out and stop ANY Muslims from coming in.

The fact that he was a flawed candidate was known at the time of the agreement. They agreed in spite of that. They agreed to prevent the very thing you and some others are calling for – a split that would give the dems a cheap victory. The fact it may be painful to perform the obligation doesn’t release one from the duty to perform it.

You claim that he is no different that the Dems, a fact that won’t by known until the end of his presidency. What is known now is that none of you, not one, has been able to come up with a viable plan that replaces him with a candidate that CAN DEFEAT THE DEMS. There’s lots of anger, lots of posturing, lots of claiming the moral high ground, but NO PLAN FOR VICTORY. If, as you claim, he is as bad as the dems, electing him over the dem won’t make any difference. But if you are wrong. If he’s not as bad as you claim, then electing him is the best we can do today, in 2016. In either case, the agreement between the party and the candidates to support the nominee is still in effect.

B-b-b-butt the #NeverTrump peeple say there’s no difference between Trump and Clinton. That Clinton advert proves the exact opposite. She’s saying Trump will make radical changes she opposes.

“…the #NeverTrump peeple say there’s no difference between Trump and Clinton.”

Maybe her next one will be how she helped destroy Libya and turn loose the African dinghy navy.

Sailer has suggested that Trump take this ad and add the appropriate music like ‘Ride of the Valkyries’. Hillary is so tone deaf she has no idea what’s coming.

When the tsunami hits her she’ll have her back turned and be cussing out her secret service guy or something.