Obama is “Thirsty” for Attention and TV Appearances

Obama is “Thirsty” for Attention and TV Appearances

Brace yourselves: Upcoming State of the Union touted as “non-traditional”! 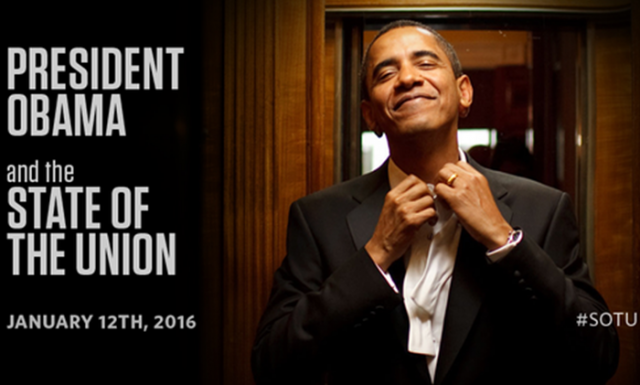 One date I am going to relish in 2016 is November 8, when Americans choose a new President.

No matter the result, I will be thrilled that our national nightmare will soon be over. Shockingly, it seems that Obama has passed his expiration date for some Hollywood types, too.

“A president should have a little more dignity,” he said. “I realize Woodrow Wilson went on Dancing with the Stars once. But what president is doing reality shows? It just seems weird to me.””It just seems a bit thirsty for me, is all.”

His comments came after a recent tweet where he criticized the president:

Why is Obama on Bear Grills trying to survive in the tundra? Isnt the idea to keep the prez alive? And why is he on a reality show?Wtf ?

Obama passed the junction of dignity and decorum some time ago, particularly with his interview with GloZell, whose claim to YouTube fame comes from eating Cheerios in a bathtub filled with milk.

Perhaps Obama is considering a post-POTUS career as “Comedian-in-Chief”. He is slated to appear in the kick-off episode of Season 7 of Jerry Seinfeld’s show, Comedians in Cars Getting Coffee.

The New York Post’s editorial board is not amused, offering this review:

…Obama started off fine, joking about his birth certificate and even offering a self-deprecating zing about being the last black president. But then he started plugging ObamaCare, complete with a whopper about how the law and its Web site were working.

That turns out to be his standard shtick. His wacko selfies for Buzzfeed were part of a drive to nudge folks to go to the ObamaCare site. And this June, he joined Marc Maron’s “WTF” podcast to argue for tougher gun laws.

So what will he be selling this time? Let’s pray it’s not another effort to insist his anti-ISIS strategy is a smashing success.

If Obama, in the final year of his tenure, wants to spend some time entertaining the country, it wouldn’t be his worst sin. But please, sir, spare us the lectures — because your agenda is no laughing matter.

Obama taped this show mere days after the terror attack in San Bernardino that claimed the lives of 14 Americans.

The next appearance we can look forward to is Obama’s “non-traditional” State of the Union address:

…The address will still be given in the Capitol before a joint session of Congress. But instead of rattling off a laundry list of proposals for lawmakers to consider, a senior White House official said the president will take a “big-picture approach to some of the challenges and opportunities that we face” as a country.

The plan is recognition of the limits Obama faces during his final year in the White House. Unfinished legislative priorities, such as gun control and immigration reform, are all but dead in the Republican-controlled Congress, and the president is unlikely to roll out major new initiatives with just 12 months left in office, most of which will be consumed by the 2016 presidential race.

The address slated for Jan 12, so that it “falls before people start going to the polls in early-voting primary states.”

Frankly, the only Obama TV appearance I am looking forward to is his farewell address on Jan. 20, 2017. I plan to be wearing a red dress and drinking champagne while I watch.

“I plan to be wearing a red dress and drinking champagne while I watch.”

(The ‘non-traditional’ stuff is pure marketing in hopes of avoiding embarrassingly poor viewer ratings seen after his last several speeches).

But that’s normal “around the house” wear for Hawkins.

And he wonders why his hens won’t lay…eggs, that is…

Depending om who wins the election in November I’ll either be: a)toasting the inauguration with some very old, very good Scots Wiskey, or; b)doing a final PM on weapons and ammo in order to be properly prepared for the government’s attempt to outlaw the Bill of Rights.

It would be nice if Option b wasn’t on the table but both Clitler and Bernie promising a full scale assault beginning with the Second Amendment, it has to be considered a distinct possibility.

In other words he’s going to spend the entire time whining about Congress not letting him do whatever he wants and stamping his food like a petulant little child.

He’ll probably threaten to hold his breath until he passes out.

And the corrupt hacks running the GOP will enable him.

Thanks again, Obama voters, for inflicting this ludicrous narcissist upon the land.

The SOTU will be Obama’s Caitlyn Jenner moment.

If I may begin with the same phrase that so many Americans will be saying to themselves, if not out loud while they watch this load of tripe.

How he gets anything above single digit approval numbers is beyond me. It’s sad too, because if he *had* engaged with his political enemies instead of being petulant, he would have been a much better president, and the country would be better off.

“He is slated to appear in the kick-off episode of Season 7 of Jerry Seinfeld’s show, Comedians in Cars Getting Coffee.”

Makes perfect sense as his tenure as President has been a joke…and unfortunately, a bad joke for America.

No matter the result, I will be thrilled that our national nightmare will soon be over.

Unless the new president is Michelle 0bama. I am still expecting her to jump in.

http://rickadams.org/images/sotu.gif Imagine if this man had done this.

O is going to announce that he’s bi-sexual and that is what is making America so great.

This Liar, Destroyer, destructor of Freedom and Islamist enabler should be in prison for Treason along with Hitlery Clinton. He and his Muslim friends have tried to destroy this Country. He doesn’t want his ” Syrian Refugees,” Vetted. He was never vetted. He is a phony, unqualified Pres.He is the biggest Terrorist we have in this country.