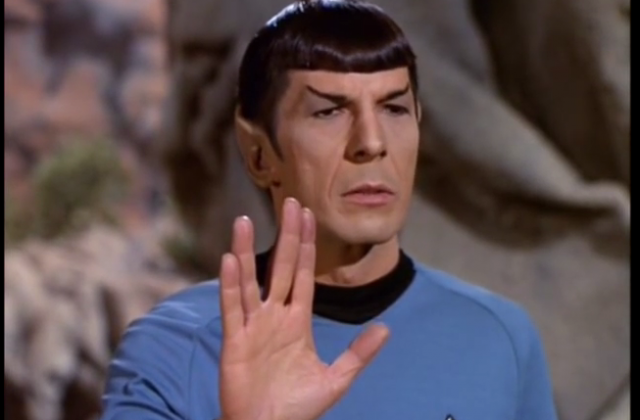 Legal Insurrection has been covering the lawsuit against the producers of a Star Trek fan film, and the amicus brief filed in the case by the Language Creation Society.

There has been a development in this case that has been…fascinating.

In advance of the July release of Star Trek Beyond, it seems Paramount is going to try to get itself beyond a serious problem it’s having with the passionate fanbase of Trekkies, and clear up a PR black eye in the process.

Tonight during a Trek fan event held on the Paramount lot, Star Trek Beyond executive producer JJ Abrams announced that the studio will be dropping a contentious lawsuit against a Star Trek fan film production. “This wasn’t an appropriate way to deal with the fans,” Abrams put it bluntly, signaling a major about face and many mended fences.

That is thrilling news indeed for many Trekkies. The Star Trek universe is certainly large enough for both the involvement of major studios and group-funded fan productions.

It seems like Abrams and the director of the movie poised to be released this summer, Justin Lin, put a lot of pressure on the studio to back off the legal attack.

“A few months back there was a fan movie — Axanar — that was being made and there was a lawsuit that happened between the studio (Paramount and CBS) and the fans and Justin was sort of outraged as a longtime fan. We started talking about it and we realized that this was not an appropriate way to deal with the fans. The fans should be iceboating this thing, like you’re saying right now.” Abrams said when asked about the Axanar lawsuit.

“We all — fans of Star Trek — are part of this world. So we went to the studio and pushed them to stop this lawsuit and now, within the next few weeks, it will be announced that this is going away.”

To say that Alec Peters, veteran entrepreneur who raised $101,000 on Kickstarter to produce Prelude to Axanar,is happy with the news would be an understatement.

In my excitement, I may have told Justin Lin that I will name my first kid after him. In fact, I am pretty sure I did…..Alec

In the new Star Trek: Beyond trailer, Spock says “Fear of death is illogical.”

It is very good news that Peters and the rest of his motivated and creative team no longer have to fear this lawsuit. This is a rare legal case that concluded with everyone being a winner.

Good! They finally caved to Star Fleet’s Prime Directive and have stopped interfering with alien civilizations and their development.

Prelude to Axanar was interesting. I’ve seen the one scene filmed for Axanar itself and despite all the green screen, etc., it had a solid feel to it. Wouldn’t it be fun if Abrams could now convince Paramount to pick it up? A “prequel” to ST would be a way to move the franchise forward.

CBS will be working on a set of guidelines for fan fiction. They can easily slip in a poison pill, such as the maximum amount which can be spent. Personally, I think they were concerned about being upstaged with a production costing perhaps 1% of a movie.

They could — but if they do, fans will simply ignore them again and they’ll be right back with this same situation.

Back in the day I was a huge reader of classic Sci FI. Heinlein, Simak, Asimov, Boroughs & John Carter/ Pellucidar, Bester etc. Of course then you could buy a paperback for .25 to .50. Now Sci FI for the most part is crap.
Everything started to change with Star Trek. Which in reality only had one decent year, & the next year featured the monster of the week. I think Star Trek was cancelled after 2 years.
That’s about the same time money took over & everything started to go to hell.
The single thing the now closing era of the past 50 years deserves to be dammed for the most is they’ve co-opted a child’s imagination & sense of adventure & replaced it with commercialized drek.
When was the last time you saw a kid in a tree playing Tarzan, or on a raft they’d built on a river floating to adventure?