It’s a veritable Mek’ba over Klingon language use! 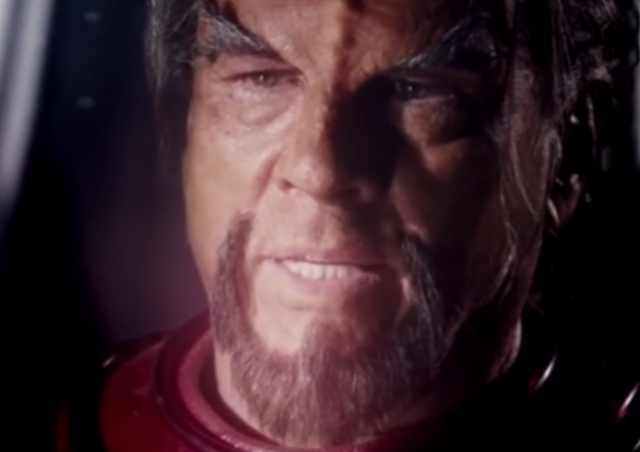 Star Trek enthusiasts are just about the most passionate among the many entertainment industry fandoms.

Because there hasn’t been any new television episodes recently (though a new CBS production is slated to begin filming soon), and the latest movies have been less than satisfying for many series buffs, veteran entrepreneur Alec Peters raised $101,000 on Kickstarter to produce Prelude to Axanar. This short film would then inspire more contributions for a larger production, as an offshoot of the Star Trek: New Voyages fan-based series.

Of course, Hollywood rewarded the creativity and capitalistic spirit shown by Peters and his supporters…exactly the way we’ve come to expect!

Paramount and CBS are suing the producers of a “Star Trek” fan film over alleged copyright infringement and late last week filed an updated complaint. The amended filing gives a more detailed account of alleged copyright violations in “Prelude to Axanar,” the studio’s previously-released short film.

Among the list of offending elements, CBS and Paramount say the film’s use of pointy eared Vulcans, the gold uniform shirts, and the Klingon language, were an unauthorized use of the “Star Trek” lore, CBS and Paramount argue about the crowdfunded project.

Citing copyright infringement on a fantasy language may be problematic. As my teen son (who dressed as Mr. Spock this Halloween) noted: “How can you copyright babble? It is not logical.”

This is how, at least in theory:

“This argument is absurd since a language is only useful if it can be used to communicate with people, and there are no Klingons with whom to communicate,” stated a plaintiffs’ brief authored by David Grossman at Loeb & Loeb. “The Klingon language is wholly fictitious, original and copyrightable, and Defendants’ incorporation of that language in their works will be part of the Court’s eventual substantial similarity analysis. Defendants’ use of the Klingon language in their works is simply further evidence of their infringement of Plaintiffs’ characters, since speaking this fictitious language is an aspect of their characters.”

It is the use of the Klingon Language that is at the center of the Mek’ba, the Klingon ritual of submitting evidence in trial. 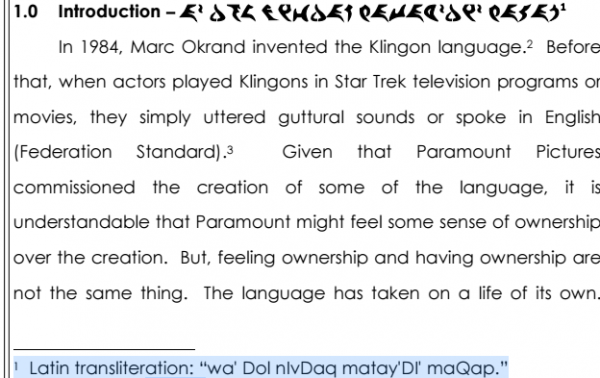 “To claim copyright in a language is to claim ownership over all possible thoughts and artistic expression that might employ that language,” the attorneys argue in the amicus brief. “If not ownership, such a claim at least provides some support for the idea that the copyright owner could, at some point, simply pull the plug on any future development in the language.”

…The attorneys point to previous case law, including on constructed programming languages. In Computer Assocs. Int’l v. Alta, the court found terms in programming languages that were required to accomplish tasks in an operating system were not copyright-protected. In Zalewski v. Cicero Builder, meanwhile, the, brief points out that court found that “if an idea ‘can only be expressed in a limited number of ways,’ those means of expression ‘cannot be protected, lest one author own the idea itself.'”

“Copyright law protects the means of expressing ideas or concepts, but it does not give the copyright holder the right to exclude others from making use of the ideas or concepts themselves,” the brief argues. “Neither is one permitted to register copyright in a word.”

The Language Creation Society also highlighted the importance of the judgement on the future use of constructed languages (conlangs), which are developed for a variety of productions (e.g., Dothraki for Game of Thrones).

Allowing copyright claims to a language would create a monopoly on use extending far beyond what is needed to protect the original work or to claim credit for the language’s creation. The potential threat of a lawsuit for merely using a conlang, or creating new works to make it more accessible, has a chilling effect; it makes conlangers, poets, authors, educators, and others less likely to build on and enjoy each others’ work, to the detriment of conlanging in general.

We believe that everyone has the right to use any language — including conlangs — without having to ask anyone’s permission. We hope that our participation in this lawsuit will help to make this belief into legal precedent.

I wish the Language Creation Society a glorious victory.

Mortified by this argument and its implications, Geeks will start wearing a rubber wrist band that says WWSD or “What would Sheldon do?”

Quick: Get on Cafe Press and start marketing that meme!

Can’t do that I’m afraid. I am strictly a Tea man.

What I still can’t figure out is why Paramount decided to sue instead of attempting to negoatiate a licence fee which would A: generate some revenue, B: assert their continued ownership over the Intellectual Property and C: not generate scads of bad press for bullying their fanbase.

If Paramount were to do something right with the Star Trek franchise then I would have to assume that I had been transported to some kind of parallel universe.

From a litigation standpoint, its more that Paramount doesn’t want to ever be in a position that they’re “forced” into a licensing agreement by an unfriendly Court based on the fact that Paramount licensed the works to another group. Courts have a bad habit of saying “well, you licensed it to this ONE group, so now you have to license it to this OTHER group, or you’re ~discriminating in some way or another.

If you acquiesce to someone taking what you believe to be your intellectual property, and then using it as a public domain, you can actually waive your rights if the terms become sufficiently synonymous.

I noticed the Axanar video was narrated by John Gill, presumably before he instituted Nazism on Ekos.

As my teen son (who dressed as Mr. Spock this Halloween) noted: “How can you copyright babble? It is not logical.” 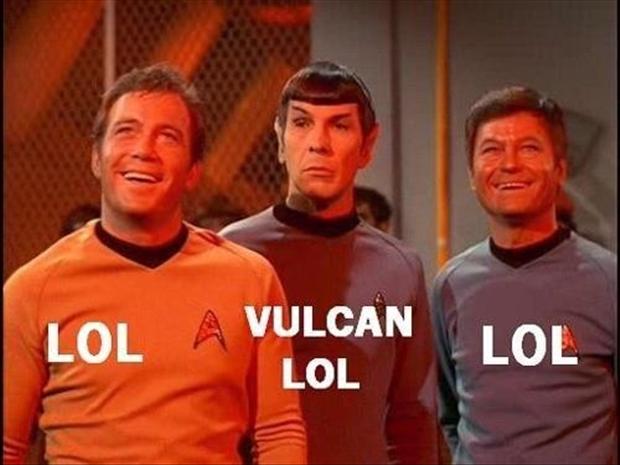 To Quote William Shatner on his SNL appearance: “Get a Life!!”

What this guy’s next project – write some more Harry Potter books? Much as I hate to admit it, Paramount has a right to control the content in its franchise for better or worse.

The uniforms, starships, aliens, and names I can see… but the language?

Much of the language is FAN work.

The Federation should have just built a wall and made the Klingons pay for it.

They could settle it Klingon Style. They may have commissioned the creation, but most of it is fan work.
http://comediva.com/klingon-style-lyrics/

Pure Capitalism. In fact, Capitalism demands that George Lucas and Steven Spielberg can break in to your home in the dead of night, and confiscate any and all copies you have of their product. Oh, sure, you might get a “replacement” version… with Jar-Jar Binks or with all the policemen’s guns digitally replaced with radios.

I’ve seen both “Star Trek Continues” and the Axanar material…..REALLY GOOD STUFF! The effects are decent while the writing/acting is better.

Paramount has a potential gold mine if they wished to cultivate it.