CBS/Paramount’s claims may not prosper, but will live long enough to survive Motion to Dismiss. 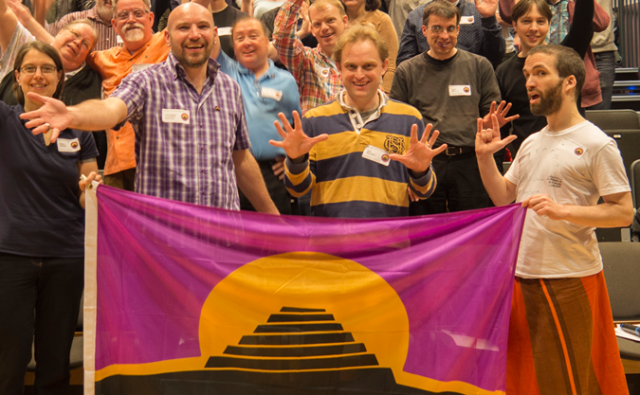 Legal Insurrection’s sci-fi fans will recall our recent report on the legal case filed by CBS/Paramount against a fan-based film being funded by Kickstarter donations.

I was intrigued by the team from the Language Creation Society (LCS), who filed an amicus brief challenging Paramount’s dubious claim about copyright infringement based on the fan-film’s use of the Klingon language.  I noted that Marc Randazza (a first amendment attorney) and Alex Shepard had filed an amusing and scholarly legal document filled with Klingon words, its alphabet, and cultural references on behalf of that group.

Fortunately, two LCS board members were able to be guests on the Canto Talk show this week, and provided an update on the case as well as details on constructed languages (conlangs) and their organization.

Sai, who founded the society after organizing a student-created class to at the University of California – Berkeley on “how to create a language” as a fun introduction to linguistics, is a now a member of the Board of Directors. He explained why the LCS interceded on behalf of the fan-film.

“[Paramount] ..specifically claimed to own the Klingon language. That part bothered us. We don’t feel people should be restrained from using constructed languages however they want.”

According to Sai, the court denied Axanar’s motion to dismiss. And while it denied the LCS motion for leave to file an amicus brief about the Klingon language “without prejudice”. The LCS will continue to monitor the case and if the Klingon language issue remains when the case goes to summary judgment, the organization may re-file a refined amicus brief. The motion for summary judgement is due mid-November, unless it is settled before.

Christophe Grandsire-Koevoets is the current LCS President, and he gave us the background on the world of constructed language.

The Language Creation Society’s mission is not to promote concrete languages in particular by the art of creating languages itself. We don’t promote a singular language like Klingon or Dothraki.

Those who love language (and from the comments section, I gather many of you do), would have some fun reviewing the group’s library, checking conlang blogs, and becoming a member to support linguistic creativity. As I noted during the show, it is wonderful to give credit to the behind-the-scenes contributors who make new worlds and cultures seem quite real through the language arts.

According to Grandsire-Koevoets, new languages are created for a wide array reasons: Profit, art, and experimentation as to the rules and limits of language. The fruits of their efforts can be heard in movies, read in literature, and enjoyed in music. Beyond Klingon and Dothraki, conlangs that may be familiar to people include Esperanto, Na’vi (from the movie, Avatar), as well as Quenya and Sindarin (from The Lord of the Rings.)

The meaning? The sun is shining.

I hope the sun continues to shine on the LCS and its good work.

All hail Fek’Lhr! Finally, something normal and reasonable on the innertubes – lawsuits about fake language in a movie.

I bet there are no tranny klingons. Just sayin’…

What about Klingons who identify as Romulans?

They neither live long nor prosper…

“I bet there are no tranny klingons.”

Since there are no Klingons, that’s a safe bet. But if you extend the category to include “klingon hobbyists”, or even just people who speak the language without engaging in costume play, you lose.

I don’t see how Paramount does not own a copyright to Klingon. The requirement for copyright is pretty basic – a creative work reduced to writing. It’s not excluded subject matter, so that is that.

The interesting questions are around the scope of the copyright. If you come up with a copyrighted language with basic grammar and a few hundred words, what happens when people add to it? You don’t own those additions. Will Paramount claim ownership of the Hamlet translation into Klingon?

I don’t envy the judge on this case – unless they take depositions in Klingon, because that would rock.

I don’t see how Paramount owns the right to Klingon.

The language was not created by them or sponsored by them. The original structured version of the language appears in “The Search for Spock.” The director and Leonard Nemoy asked Marc Okrand to write a few lines in “Klingon” as before that, the language was just some guttural noise. Okrand did that, and then later as a lark, published a “Klingon Dictionary.” The rights to the dictionary were later purchased by CBS. It is unclear to people whether Paramount purchased the rights to the dictionary when it acquired CBS for a time.

However, it does not follow that the creation of a dictionary confers ownership of the entire language. (If it did, think how rich the heirs of the Merriam Brothers (as in Merriam – Webster Dictionary) would be.)

Paramount can copyright or protect phases and sentences as part of dialogues or ad campaigns. They cannot copyright an entire language.

As it stands, the judge in the case has dismissed the amicus brief filed by Marc Randazza on behalf of the Language Creation Society without prejudice.

As the LCS says, that means the judge is not saying “no,” but is saying “not now.”

The LCS will be free to file the brief if and when the actual issue of whether Paramount can copyright a language is brought up or germane to deciding the actual copyright claims.