The first black swan lands on the debate stage. 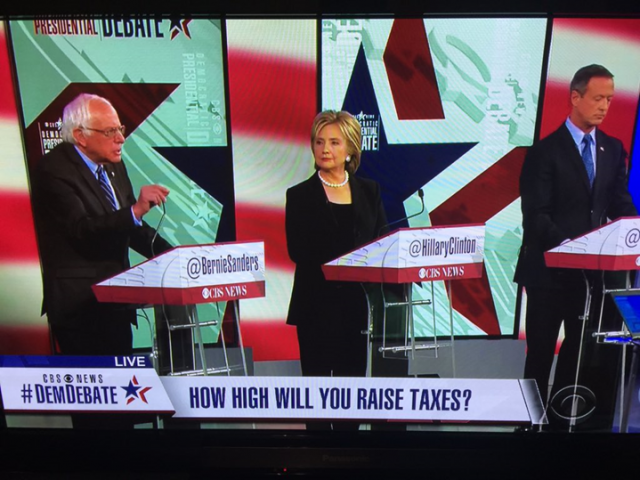 Brave souls who watched the CBS Democratic Party debate Saturday night were treated to a serious-minded, sober event in which the moderators asked fairly challenging questions.

The responses were unsurprising, and should not change the direction of the primary in a significant way.

However, the Republican Party will find a great deal of fodder for the presidential battle ahead.

There were a few lowlights that I think are worth featuring.

When asked, I have always asserted that “black swan” events, or, those events that are not readily anticipated and make a significant impact, will be key in the 2016 outcome.

The Paris attacks were the first of these “black swans”.

As a result, in the next few months, Americans will be looking to see which candidate can be viewed as the most effective Commander-in-Chief with a solid plan to defeat ISIS.

With that in mind, Senator Bernie Sanders took himself out of the running this weekend with this answer:

No. The growth of terrorism is related to the spread of radical Islamic belief.

Americans are going to care little about the intricacies of Glass-Steagall if they are worried about their children dying in a barrage of rifle fire…like a young California coed.

A college student from California was among those killed in the terror attacks in Paris, California State University in Long Beach said Saturday.

Nohemi Gonzalez, 20, a junior, was one of the at least 129 killed in the multiple attacks late Friday that also injured more than 350. In a statement on Facebook, California State University in Long Beach said Gonzalez was enrolled there and was attending Strate College of Design in Paris during a semester abroad.

Hillary Clinton’s integrity was “impugned” by Sanders, which resulted in the frostiest exchange so far, during the discussion of Wall Street’s influence. To defend herself, Clinton essentially explained she allied with Wall Street in response to the 9-11 attacks.

So taking that campaign money was the patriotic thing to do! Good to know!

“She’s gonna all of a sudden become Mrs. Wall Street if she’s elected. So it’s all Bernie theatrics right now,” Camden Fine, the head of the Independent Community Bankers of America, told the Morning Consult. “She’s a Clinton, for God’s sake. What do you expect?”

The third candidate, former Maryland Governor Martin O’Malley, did himself no favors in this response to a question on immigration:

John, I was the first person on this stage to say that we should accept the 65,000 Syrian refugees that were fleeing the sort of murder of ISIL, and I believe that that needs to be done with proper screening. But accommodating 65,000 refugees in our country today, people of 320 million, is akin to making room for 6.5 more people in a baseball stadium with 32,000.

The TSA airport screenings are failing at a rate of 95%, so why should we expect government competence when it comes to migrant screenings? And, as the Paris massacres show, it only takes 7 people to organize and carry out a multi-site mass casualty attack.

Finally, if all of this inanity was not enough, there was an entire segment on exactly how high taxes should be raised!

This sums it up perfectly. Hold on to your wallets, America… #DemDebate pic.twitter.com/Tsk2Jikhd1

But, at least Bernie isn’t going to tax us at 90% like Eisenhower did! Also good to know!

If there was a notable gaffe that was made, this would be it:

Hillary: “I come from the 60′s”. Way to remind everybody about your age and generation. Not a positive for many potential voters.

Finally, Clinton gamely played the Gender Card several times during the discussion, including the conclusion.

I think the president’s job is to do everything possible, everything that she can do to lift up the people of this country.

Who won? The CBS moderator was very good, hitting the candidates with more robust questions that I had anticipated, so:

As a registered Democrat, I will be forced to choose among these three for a candidate during the primary. In 2012, faced with no choice but Obama, I wrote in Mickey Mouse.

Next June, I will write in “Minnie Mouse”…as an homage to the Gender Card that Hillary is constantly playing.

The idiotic thinking that immigrants will be screened when there is NO viable way of tracing their background is more theater of the absurd, more “existential threat” and completely lacking ontology.

“When asked, I have always asserted that “black swan” events, or, those events that are not readily anticipated and make a significant impact, will be key in the 2016 outcome.”

Honestly? You are trying claim you have some sort of prescience
for yourself and you say:

“The Paris attacks were the first of these “black swans””.

What kind of event do you think the murder of Kate Steinle was?

What kind of event do you think the murder of Kate Steinle was?

That was not murder, that was criminally negligent homicide, although maybe it could qualify as felony murder.

The shooter was foolishly testing out an illegal gun he had bought in a city unfamiliar to him. Had the stolen gun been sold to an American citizen he would have fired it, if at all, in a low income community that had a high crime rate, not in a tourist section.

The Paris attacks notwithstanding, Democrats in general and Hillary in particular, cast a dark shadow on our country that does not bode well for our future. This is in addition to the dark, slimy, unnecessary evil that Obama has brought upon our country by bringing in unlimited Syrian terrorist (refugees my azz) which we will one day, perhaps soon, deeply regret.

I can see a Republican ad next year.

“What difference does it make?” refers to the statements taht Hillary Clinton, and others, made and did not make, in the immediate aftermath (first two week or three) of the attacks in Benghazi that killed four U.S. citizens.

What a terrible shame. Especially after the CBS mods already had spent so much time drilling the Dem candidates on what questions to expect and how best to respond.

I would have changed one word in the lede:

“The first black swan crapped on the debate stage.”