The media is so biased against Democrats, right? 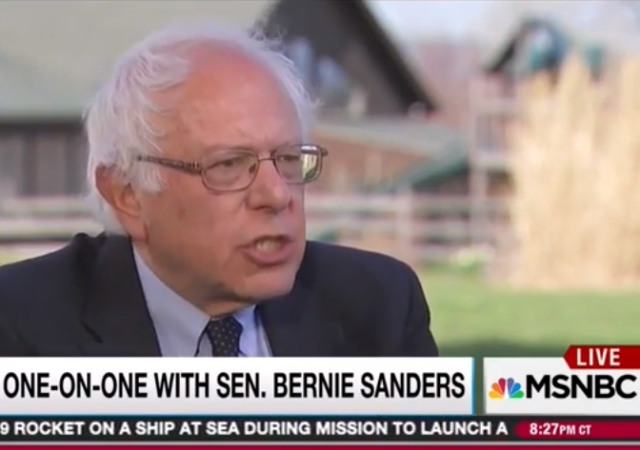 FOX News lives rent free in the heads of liberals all over America. They just can’t stand the fact that one news network dares to include conservative voices alongside liberal ones.

Obama has been complaining about the network since taking office and now Bernie Sanders is singling out FOX and suggesting that liberals should have a similar network.

Here’s the best part – He made the comments to Rachel Maddow on MSNBC.

“I think we have got to think about way that the Democratic party for a start starts funding the equivalent of Fox television,” he said in an interview that aired Friday on MSNBC’s “The Rachel Maddow Show.”

“I think the American people are going to have to say to NBC and ABC and CBS and CNN, you know what, forget the political gossip,” Sanders said. “Politics is not a soap opera. Talk about the real damn issues facing this country.”

Liberals also have Hollywood and academia in their corner but somehow it’s never enough.

They just can’t stand that FOX News is allowed to exist.

“They [the left] just can’t stand that FOX News is allowed to exist.”

And to continue on,

“They just can’t stand that Israel is allowed to exist.”

“They just can’t stand that private ownership of guns allowed to exist.”

“They just can’t stand that climate change deniers are allowed to exist.”

“They just can’t stand that the truth in place of their fantasies are allowed to exist.”

The echo goes on and on. “Claiming to be wise, they instead became utter fools.”

What Sanders is really saying is that the liberal as Sanders is media is totally in the tank for Hillary.

Interesting. Bernie has just shown a chink in his own Central Planning armor. A liberal version of Fox News would be … competition; a dramatically un-socialist concept. Such a station would have to work to build up an audience, instead of having it assigned by government fiat. This is quite a contrast with Obama’s attempts to silence or marginalize FOX by the blatant abuse of government power. In at least this sense, Obama would make a better Communist than would Comrade Bernie.

And, even better, by saying this on MSNBC, Bernie’s making it fairly clear that he doesn’t consider MSNBC itself to be the FOX counterweight he has in mind. He wants a news station which people might actually watch. Very sensible.

On the other hand, he sees this as a propaganda arm of the DNC, and seems to confuse such a thing with the news. And as pointed out supra, he seems unaware that CNN, CBS, ABC, NBC, PBS, NPR, etc. already fulfill the function he has in mind, even if MSNBC doesn’t.

Bernie at least is thinking, even if he isn’t thinking very well. This is a bit of a relief; nearly everyone else in politics seems to be running on autopilot, following the course they started on ‘way back when they were first wound up and released into the wild.

Wouldn’t NPR suffice as a liberal/government apparatus in a Sanders presidency?

Not really. It seems to me that what Senator Sanders wants in a Leftist version of Fox News, is a Leftist news station that isn’t fluff and crap. An EFFECTIVE investigator of the issues that are actually useful to suss out. So, it would be a Leftist version of what Fox News was a few years ago.

NPR hasn’t filled that role in years… and neither has the MSM. (Nowadays, neither does Fox News, for that matter.) That’s why he sees the need for a new type of News Network.

Your description of the ideal leftist news network seems to be of one that would search out the truth. Will never happen on a leftist network!

I can’t believe it! It’s all so simple!
WHY DIDN’T ANYONE ELSE THINK OF THIS BEFORE NOW?!?!