SHOCK POLL: Only 6% of Americans Trust Our Elite Media!

SHOCK POLL: Only 6% of Americans Trust Our Elite Media!

Actually, this headline is a hoax… it is no shock. 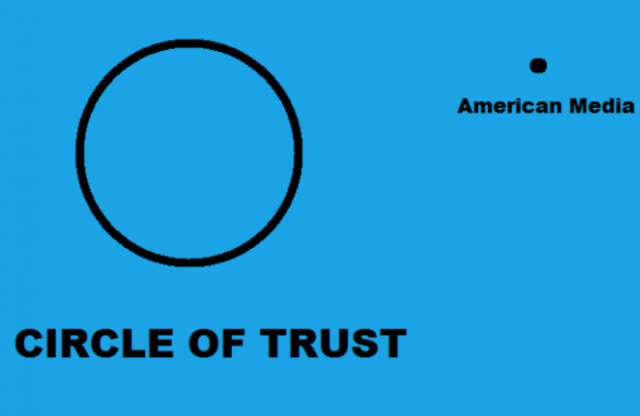 However, this particular story leaves a bitter aftertaste. Because our “Schools of Journalism” no longer produce real reporters pursuing solid news leads and doing basic research, but propagate progressive activists dependent on iPhones and filled with a toxic blend of moral  superiority and outrage, the concoction was set to be spread courtesy of KVUE-TV in Austin.

This is how the initial report on the cake began:

Austin-based grocer Whole Foods Market is being sued after an openly gay pastor alleged a cake he ordered from the flagship store on North Lamar Boulevard contained a gay slur.

The three-letter word written on the cake has incited much emotion.

“For me, it was humiliating,” said Jordan Brown. “The feeling that I had just resurfaced a bunch of painful memories.”

A good reporter would have presented Whole Foods’ counter-claim in the lede, at least. An excellent one would have had a hearty laugh, then attempted to find a real story to cover.

And as if the original article weren’t bad enough, several national-level publications were angling to spread the news. Here are the tweets showing that staff at ABC in New York and USA Today were poised to promote the tale: 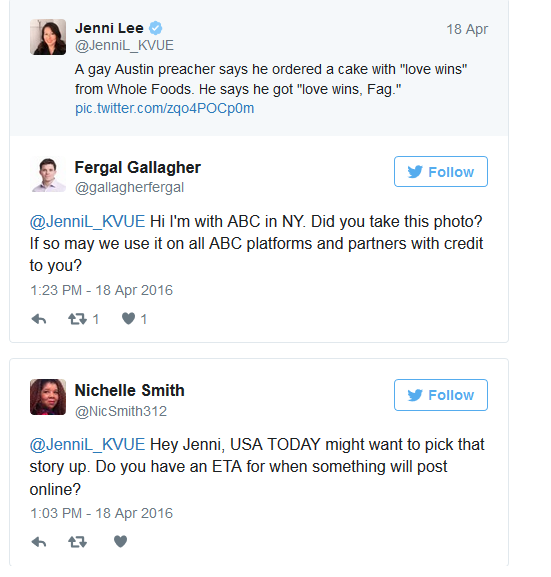 Little wonder, then, that the American people have never held a lower opinion of the Fourth Estate:

Trust in the news media is being eroded by perceptions of inaccuracy and bias, fueled in part by Americans’ skepticism about what they read on social media.

Just 6 percent of people say they have a lot of confidence in the media, putting the news industry about equal to Congress and well below the public’s view of other institutions. In this presidential campaign year, Democrats were more likely to trust the news media than Republicans or independents.

Even Democrats are already less than impressed by how the press is handling the 2016 election news. Over 2000 Sanders supporters protested at the CNN building in Los Angeles, complaining about the network’s preferential treatment of Clinton.

But it is still better than what the Republican field faces. Who can forget the flaming hot dumpster fire that was the CNBC debate, which caused the Republicans to pull out of future NBC debates?

By the time the actual election rolls around, our mainstream media may be recalling this time of 6% approval as the “Golden Days” of its popularity.

A quick check of the Legal Insurrection Hoax Files reveals how often the press falls for something as true…because the reporters think it should be true.

The cake story can now be added to the ever expanding list of #FakeHateCrime stories.

@WholeFoods @JStanleyDesign Do you have a zero tolerance policy against #FakeHateCrime as well? #LGBT https://t.co/HqaDyi2qdI #tcot #bcot

If a free, fair and functioning press weren’t so vital to good governance, the new poll results would be much sweeter news.

The surprise is that 6% actually believe what the MSM says. But then I have always been amazed that a Fool and his Money ever get together in the first place.

USA Today at least has a story today that explains that the cake is a fake and that Whole Foods is fighting back. The reporter uses all the weasel words — ‘allegedly’ — and all, but still you can figure out what happened.

In constrast, I can’t find the story at all on the ABC news website this morning. Perhaps a SJW hoax is a “dog bites man” story…

Didn’t we all wonder about this claim when we heard it was against Whole Foods?

Given the sheer number of hoax ‘hate’ events that have been rolling around of late, I suspected it before I got to the part where the store name was mentioned. For some odd reason the story I first saw it in buried that detail…

Part of this is something I noticed last night. At exactly 10:01pm, DailyMail had a headline saying that Trump “won HUGE” with .33% of the precincts reporting.

Yes, he did win HUGE. But with 1/3 of 1% of precincts reporting, that is not an accurate headline. It is a “I am going to announce it first” gamble.

If so many people are finally tuning up their fraud receptors, the Hillary! campaign should be bombing.

Hillary supporters don’t count. That’s like Pinocchio’s girlfriend panting “Lie to me! Lie to me!”

I have turned off TV including Fox News and Fox Business (aka Trump commercials).

The media, TV and Radio in particular, are formats for back to back commercials, commercials for whatever product they pimp to stay in business.

I can check news and the stock market online.

I spend my time away from media and invest my time in reading.

That. In spades. With afterburners. I dumped cable TV five? six? years ago. Haven’t missed it.

Don’t have a TV. The “idiotbox” got junked 4 years ago.

No, I don’t miss the commercials, either.

Journalism has always had a level of advocacy underneath it. I seem to remember the media was brutal in how it covered people like Goldwater and Nixon, or so I read. I remember reading first hand mostly negative pieces about Reagan, even after his landslide reelection. And that’s why the fawning over Obama was even more glaring. So the media has never represented “the folks” in their personal makeup nor in their editorial choices.

But it is worse now, for sure. And the competition with social media and blogs/internet sites means the quality has eroded even further. How many articles do we know read with typos and other errors that clearly prove the goal is timing and not content?

Up through most of the Twentieth Century, there were competing city newspapers, and they often represented opposing parties.

With the consolidation of the industry, all that got homogenized. J-schools put the final nail in the coffin of non-biased reporting.

The the three broadcast networks were…within my memory…always reliably Collectivists.

Forty years ago, I had an undergraduate US Government & Politics course professor assert in class that the Boston Globe was Democratic and liberal while the Boston Herald was Republican and conservative. As a science major, I thought that was a hypothesis that could be tested for a term paper. For ten weeks, I saved the daily editorial pages for both newspapers, categorized them by topic, and compared positions taken by the editorial boards when the topics were shared by both papers. Aside from observing that two different editorial boards authored the editorials, I found no substantial differences between the two newspapers for the ten week period. I concluded the term paper with a suggestion that a double blind study might have difficulty determining which newspaper wrote which editorials.

Silly me. The differences, if any, between the newspapers belonged to a mythical, distant past, and I was a fool for not knowing that what was observed in the past (whether right or wrong, substantiated or not) is true for those who live in the past (i.e. Political Science professors) despite what is now. It was truly a learning experience for all the wrong reasons.

The left so wants their hate meme to be true that when they can’t find the real thing, they have to manufacture it.

The press so wants the hate meme to be true that they look for every opportunity find it.

This is how left-wing extremism works.